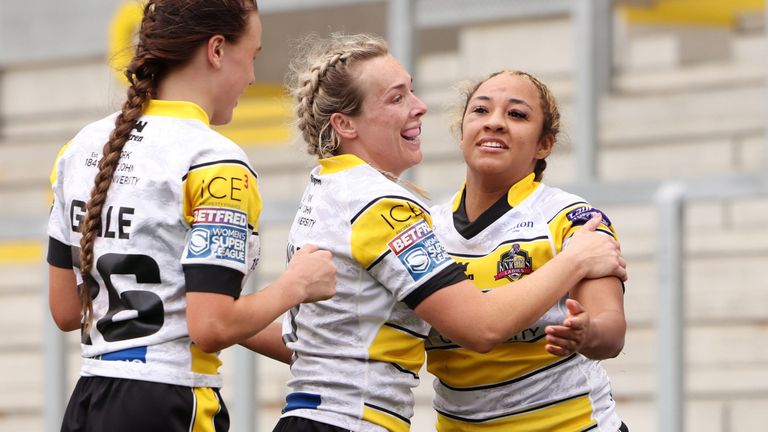 York are through to the Betfred Women’s Super League Grand Final for the first time after a hard-fought win over Wigan Warriors; Leeds ended St Helens’ reign as champions with victory in the other semi-final at Headingley

We round-up all of the action from Headingley as York City Knights and Leeds Rhinos booked their places in the Betfred Women’s Super League Grand Final at Totally Wicked Stadium on Sunday, September 18…

Tries from Savannah Andrade and Kelsey Gentles helped York into the Grand Final for the first time as they battled past Wigan Warriors in the first of the day’s semi-finals.

It was all York for large parts of the first half, but Wigan’s defence held strong to keep the City Knights scoreless at the break – the first time this season they had been kept scoreless at half-time.

The closest either side came in the opening 40 minutes was through Gentles, only for the video referee to rule her try out after replays showed the England international knocked on before grounding the ball.

However, the second half was barely a minute old before the deadlock was finally broken as Tara Stanley fed Andrade for the centre to step on the gas and power her way over.

Full-back Stanley converted and added another two points from a penalty six minutes later, and York surged further ahead in the 51st minute as Gentles made amends for her earlier error.

The winger was there to finish off wide on the left after a strong run from Sinead Peach, followed by Hollie Dodd stepping the defence and then Katie Langan providing the final pass for an unconverted score.

Wigan were not done yet, though, and kept their hopes alive through Laureane Biville, who capitalised on a rare error from Stanley as she lost possession after leaving a ball to bounce and the French star scooped it up to finish for an unconverted try.

But there was to be no comeback for the 2018 Grand Final winners as the City Knights saw out the game to clinch a berth in the showpiece game on September 18 on the day when they were also presented with the League Leaders’ Shield which had been secured the previous week.

“It’s just amazing,” York head coach Lindsay Anfield said. “They were doing it tough at times, but credit to Wigan for a class game and I’m just so pleased for our girls that they can get to their first Grand Final.

“The spirit and belief the girls have that they can go to a Grand Final and do something is brilliant.”

Saints, who rested inspirational captain Jodie Cunningham as a precaution for this semi-final, had already beaten the Rhinos in this year’s Betfred Women’s Challenge Cup and were back at the venue they defeated the same opponents in last year’s Grand Final.

There had been little to choose between the teams in either of those meetings and it proved to be the case again this time around as well, although it was the defending champions who had the better of the early opportunities.

Emily Rudge and Shona Hoyle had possible tries ruled out by the video referee and St Helens then broke the deadlock in the 25th minute when Rebecca Rotheram sent Rachael Woosey bursting through a gap from 10 metres out to finish. However, Beth Stott’s conversion attempt hit the posts.

That was the only score of the first half and Leeds were back on level terms within seven minutes of the restart after forcing a goal-line drop-out, with Courtney Winfield-Hill sending Robinson over on the left touchline for an unconverted try.

A 62nd-minute penalty from Stott edged Saints back in front, but they were undone five minutes later when Winfield-Hill put in a pinpoint cross-field kick which evaded the grasp of Eboni Partington and sat up perfectly for Robinson to grab and finish.

There was still time for Zoe Hornby to force her way over from close range as the hooter sounded, followed by Winfield-Hill putting the seal on the win with the conversion, to keep Leeds on course for their first Grand Final triumph since 2019.

“It was really hard fought, and the girls just did right for each other,” Rhinos head coach Lois Forsell said.

“They’ve been absolutely class in turning up for each other, and they had that belief so I’m massively proud of them.”

Watch York City Knights and Leeds Rhinos battle it out to be crowned champions in the Betfred Women’s Super League Grand Final at Totally Wicked Stadium on Sunday, September 18, live on Sky Sports.