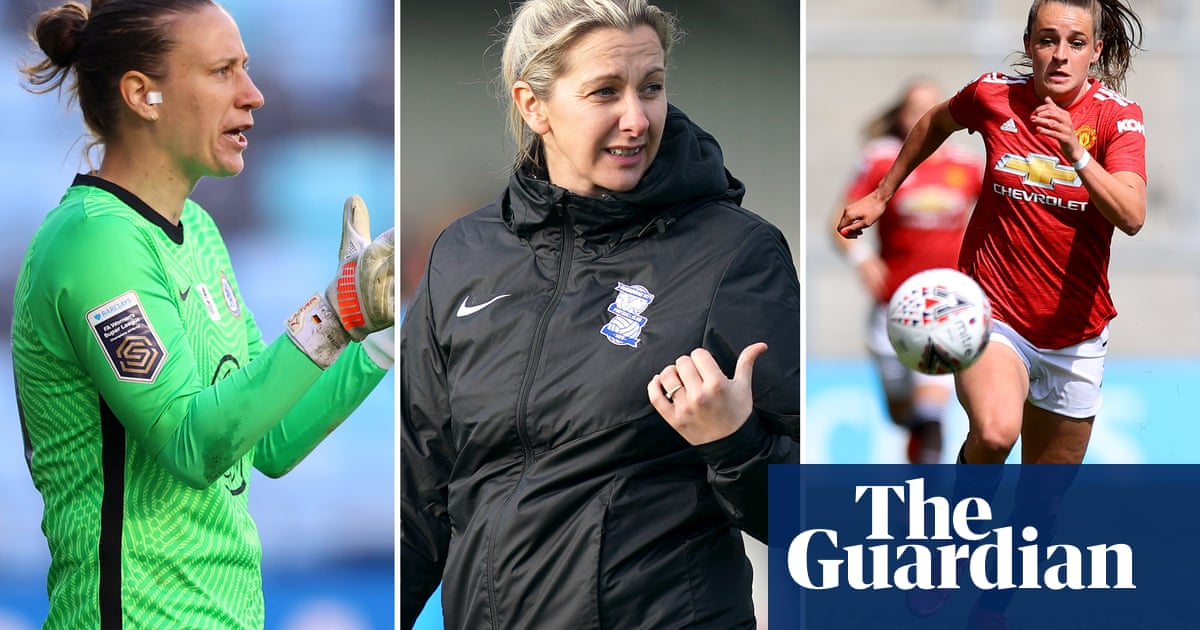 A run of four defeats in seven league games has taken Manchester United from being top at Christmas to fourth now and battling Arsenal for the third and final Champions League place, but beating Spurs 4-1 in a one-sided match will have given them hope. They now need maximum points from their remaining games against Bristol City and Everton and, more important, for the Gunners, who have won their last six in the league and have a massive goal difference advantage, to trip up against West Ham, Everton or Aston Villa. The young England forward Ella Toone scored twice and set up another – she is United’s top scorer, and behind only Hayley Ladd in their assist rankings.

These are two young teams at big clubs – Spurs are only three years old and United two – but United are far ahead at the moment. Arsenal, meanwhile, have timed their resurgence perfectly and look likely to take that last place in Europe. They played sixth-placed Brighton, who are the only team to have beaten Chelsea in the league this season and are not to be taken lightly, and dominated throughout – they had 16 shots to Brighton’s three – and Jordan Nobbs’s two goals decided it. The Olympics are on everyone’s minds at the moment and the Team GB announcement is looming, and after missing a couple of months through injury earlier this year Nobbs’s goals confirmed that she is back and in serious contention.

A scrappy goal in the fifth minute of stoppage time denied Aston Villa the win that would probably have kept them up, with the 2-2 draw instead keeping Bristol City in the survival race. It was a match between two teams fighting for their lives and there wasn’t a huge amount of quality, but from the third-minute own goal that put Villa ahead to the last-gasp equaliser for City there was plenty of drama. Villa have really improved since Marcus Bignot arrived in January, and they are now showing fight and character – that gritty side you would expect from him is coming out. The Bristol match was the first of three in a row against the other teams in the bottom four, and with only goal difference keeping them off the bottom they really need to win one of those to secure their place for next season.

West Ham have lost only one of their last five, with three draws, and after their stalemate with Everton it looks as if they are going to be sweating right to the end. There was a lot of hype and excitement around them earlier in the season, with a documentary film crew following them around, but they have not been doing their job on the pitch and everything else eventually went a bit quiet. They just needed to knuckle down under their new coach, Olli Harder, and when they beat Reading 5-0 away earlier this month that was a real statement of intent. They haven’t scored in two games since then, but they haven’t conceded either, and what was a sinking ship now has a chance of staying afloat.

It’s an impressive turnaround, but their three remaining fixtures aren’t very encouraging: on Wednesday they visit an Arsenal team still scrapping for a Champions League place, and they end their season with a game against Manchester City. It will be hard to get anything from either of those, so the pressure will be massively on when they go to Aston Villa on Sunday. If they lose that, they could yet get dragged into trouble.

Birmingham claimed an important point against Reading, battling back impressively from conceding an early goal to draw 1-1. They have had such a poor season on and off the pitch, it just seems to have been a fight for everything. More recently they have been in the news for all the wrong reasons, with their players vocal about their team’s substandard training and playing conditions, but this season has been a battle from the very start, when Carla Ward came in with only seven players at the club. But for all that their fight is unquestionable, to still be in with a chance of ending the season having secured a place at the top level is impressive. Their next match is on Wednesday at home to Aston Villa – local rivals and the last team they beat in the league, 13 games ago back in November – and looks absolutely vital.

Beaten Chelsea could still be the quad squad

Chelsea’s quadruple hopes are still alive after a 2-1 first-leg defeat at Bayern Munich in their Champions League semi-final on Sunday. None of the four teams left in the competition – Barcelona drew 1-1 at Paris St-Germain in the first leg of the other semi-final – have won it before, and the away goal means Emma Hayes’s side will go into Sunday’s second leg still optimistic that, after losing in the semi-finals in 2018 and 2019, this could be their year. The Bayern match came only three days after they played Manchester City in the title decider, an enthralling 2-2 draw in the game of the season. With a two-point lead at the top of the table, not losing was the objective for Chelsea, and they achieved it after an adrenaline-fuelled end-to-end match that either team could have won. They needed the save of the season from Ann-Katrin Berger to do it – her reaction to push a Lucy Bronze header to safety was one of the best stops I can remember seeing.