Women’s Ashes Test ends in a draw after thrilling finish 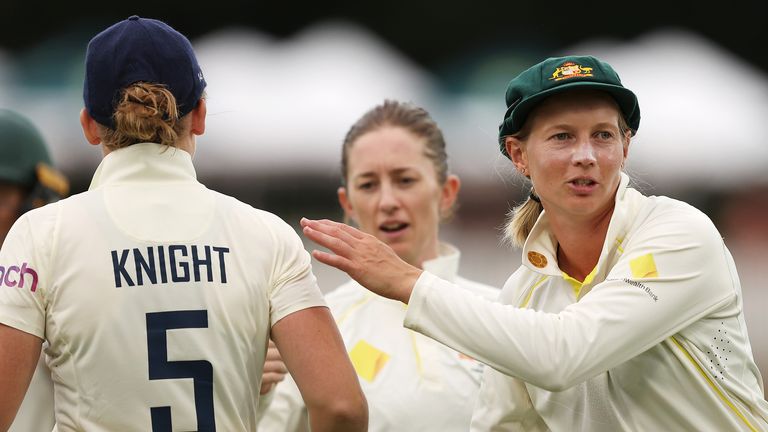 Match drawn as England finish 245-9 chasing a record 257 for victory against Australia; Nat Sciver hits half-century as tourists pushed hard for victory before late wickets put the home side on the brink of retaining the Women’s Ashes; Australia lead the multi-format series 6-4

The Women’s Ashes Test ended in a thrilling draw as both England and Australia came agonisingly close to forcing a win in a dramatic final session.

When Australia declared on 216-7, England were set a tempting but improbable 257 to win in 48 overs and despite a required rate that hovered around six an over throughout the final session, they took it on and even looked favourites with five overs to go.

Nat Sciver (58) and Heather Knight (48) set up the chase, which would have been a record in a Women’s Test match, and Sophia Dunkley thumped 45 from 32 balls to put the tourists in the ascendancy.

Even once Dunkley was dismissed, England kept pushing for the win and it was only when they lost two wickets in two balls to slip to nine down, with 13 runs more needed, did they change tact and batted out for the draw, ending on 245-9.

Australia had 13 balls to try and snatch victory in a game that appeared to be slipping away from them and retain the Ashes, but Kate Cross (1no) and Sophie Ecclestone (0no) survived to keep the series alive with the home side 6-4 up going into the three one-day internationals.

The Women’s Ashes series will now be decided by the three one-day internationals. The first takes place in Canberra on February 3 before the final two are held at Junction Oval in Melbourne on February 6 and 8 respectively. Victory in a one-day international is worth two points, while the sides will pick up a point apiece in the event of a tie or no result.

England’s men’s Test team return to action in March – also against the West Indies. The three-match series starts in Antigua (March 8-12) followed by fixtures in Barbados (March 16-20) and Grenada (March 24-28).