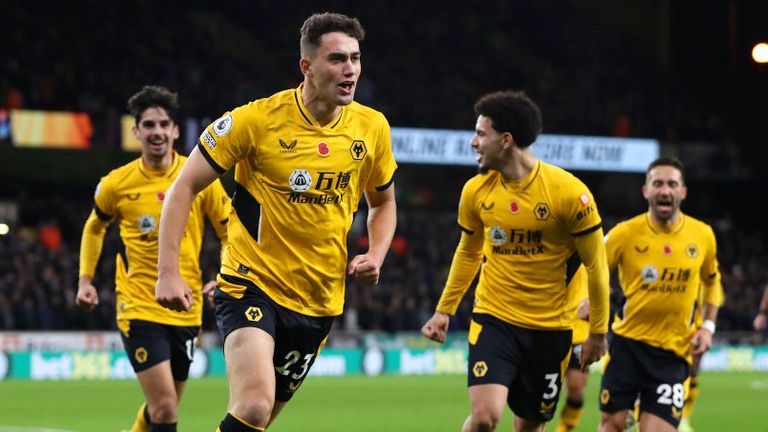 First-half goals from Max Kilman and Raul Jimenez helped Wolves to a 2-1 win over Everton as Rafael Benitez’s side were beaten again.

Alex Iwobi did pull one back for the away side at Molineux but Wolves’ superiority in the opening 45 minutes proved the difference as Bruno Lage’s men move up to seventh in the Premier League table with a fourth win in five games.

Benitez’s Everton are in desperate form by comparison, failing to reverse the recent trend of results that saw them beaten 5-2 at home to Watford last time out.

Though they pushed hard for the equaliser, they paid the price for their sluggish start – failing to deal with a set-piece and then gifting Wolves their second with Ben Godfrey’s careless back-pass.

How Wolves won it…

Wolves were brighter from the outset with Ruben Neves’ volley being parried by Jordan Pickford into the path of Conor Coady, who could not quite get enough on the rebound.

Pickford produced an even better save inside the first quarter of an hour, stretching to tip Francisco Trincao’s curling effort over the crossbar as Wolves continued to push.

The home side then thought they had found the breakthrough when Jimenez’s driving run into the box found Hwang Hee-chan, who put the ball in the net at the second attempt.

Man of the Match: Raul Jimenez

That one was ruled out for offside after a VAR check but Everton did not heed the warning and Wolves eventually took the lead on 28 minutes through Kilman’s firm header.

If Benitez would have been disappointed by that – a straightforward goal from Rayan Ait-Nouri’s left-wing corner – he would have been bereft at the manner of the second.

Ben Godfrey’s woefully under-hit back-pass was intercepted by Jimenez, leaving him clean through. The finish was cute, delicately lifting the ball over the goalkeeper for his 50th Wolves goal.

It was no more than Wolves deserved for their enterprising play in the first half with Everton rarely in possession of the ball and only an intermittent threat on the counter-attack.

Everton came out with more intent in the second half – they had to – and looked more threatening as they committed bodies forward but their first chance came from an error.

Two changes for Wolves as Ruben Neves replaced Leander Dendoncker in midfield, while Francisco Trincao is restored in favour of Adama Traore who drops to the bench.

Four changes for Everton after the Watford debacle. Mason Holgate is drafted in with Lucas Digne missing out through injury. There is a change in midfield where Jean-Philippe Gbamin is preferred to Tom Davies, while Alex Iwobi replaces Anthony Gordon. As expected, Richarlison comes in for Salomon Rondon up front.

Wolves goalkeeper Jose Sa kicked the ball straight to Richarlison but the Brazilian was quickly closed down and a combination of Sa and Coady managed to keep it out.

Everton’s push was rewarded when Godfrey’s ambitious shot was cleared only as far as Iwobi and he drilled the ball beyond Sa to halve the deficit and silence Molineux.

Wolves must have been fearing their wastefulness would prove costly as they spurned the chance to restore the two-goal lead, Trincao shooting wide from point-blank range.

Trincao appeared to have won a penalty when hacked down by Mason Holgate but referee Martin Atkinson amended the decision to reflect the fact that it was just outside the area.

Anthony Gordon’s introduction livened the away support immediately and the youngster almost found the equaliser, his header from Andros Townsend’s corner being well saved by Sa.

Though it was a nervy finish, Everton were unable to create another opening as they slumped to a third consecutive Premier League defeat. Wolves are going in the other direction.

Man of the Match – Raul Jimenez

Sky Sports’ Jamie Carragher: “He is some player. Sometimes when a player is out for a long time, you almost forget how good he is. Jimenez has been described as the best striker outside the Champions League-chasing team for years, ever since he arrived in the Premier League.

Bruno Lage is trying to turn Wolves into a more expansive team and there were plenty of signs of that throughout a confident performance.

The big change that he has instituted is the positioning of the wide forwards with Hwang Hee-chan and Francisco Trincao operating much closer to the centre-forward than Adama Traore and Pedro Neto did last season.

When it works, it results in some delightful interplay between the front three as they pick the ball up in pockets of space.

There is work to do and Wolves really should have finished Everton off, avoiding the nervy finish. But this was another encouraging step.

On the day that Lage’s predecessor Nuno Espirito Santo was sacked by Tottenham, Wolves will feel they made the right call.

Wolves boss Bruno Lage, speaking to Sky Sports: “What we did in the first half we didn’t deserve to suffer a little bit in the second half. We did very well in the first 45 minutes.

“They changed a little bit for the second half, they tried to play with more midfielders to control our inside game and we didn’t adapt to that.

“We didn’t press the way we should press but even then we created a lot of chances. Overall for the 90 minutes it was three deserved points for us.

“This is the Premier League, the teams are top teams, the coaches are top coaches, we cannot forget Rafa Benitez won the Champions League, we need to be as a team for the full game and when the other team change we need to continue and adapt.

“He [Raul Jimenez] is the first guy to press, this is the most important thing he does for us and the way he comes to link the game between the lines, very important for us.

“For now I don’t care about the table. I want the points. I think the winter will be hard for us, we will have to work. To win the most points we need to win this kind of game.”

Everton boss Rafael Benitez, speaking to Sky Sports: “It is a pity because we didn’t play in the first half. We had a lot of character and chances in the second half, it was maybe a little too late. That was the reaction we were expecting but it was just a shame we didn’t do it in the first half.

“They were growing in confidence. We have to see what we did in the second half for 90 minutes. Obviously we didn’t do it and that is where we have to improve.

“We saw the character in the second half to react after a bad first half.

“I think we are close but missing the players that can make a difference.”

Wolves go to Crystal Palace in the Premier League on Saturday at 3pm, while Everton host Tottenham on Sunday at 2pm.