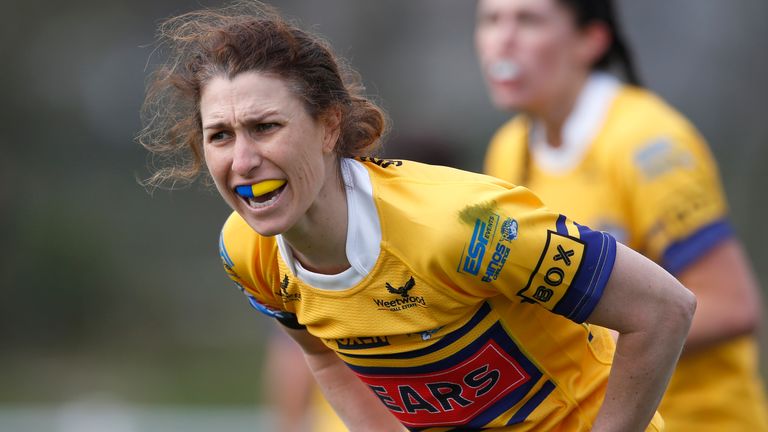 Courtney Winfield-Hill and Caroline Collie have been added to the England Women Performance Squad as head coach Craig Richards bolsters his options amid preparations for this year’s Rugby League World Cup.

Winfield-Hill was an integral part of the Leeds Rhinos side which lifted both the Betfred Women’s Challenge Cup and Super League titles in 2019, with the halfback going on to be named as that season’s Woman of Steel.

Winfield-Hill, 35, is from Queensland and represented the State at cricket, including as a member of Brisbane Heat’s Big Bash squad, before moving to England in 2018, when she joined the Rhinos. She married Lauren Winfield, the England and Yorkshire cricketer, in March 2020, and qualifies for England under International Rugby League’s ‘residency’ eligibility rule.

Collie becomes the first woman from the Betfred Women’s Super League South – which was launched in 2021 – to be selected for the England Performance Squad after an impressive debut season with Bedford Tigers.

The former Arsenal and Chelsea Ladies goalkeeper has also played Rugby Union for Bletchley and represented Scotland 7s at international level before making the switch to Bedford.

Richards said: “We’re delighted to be able to bring Courtney into the England Women set-up after a lot of work behind the scenes to ensure it could happen.

“Courtney has consistently proven herself as one of the leading players in the Betfred Women’s Super League and has been pivotal to Leeds Rhinos success.

“She gives us another impressive option in the halves as we prepare and will create even more competition for places as we head into the mid-season international with France and the Rugby League World Cup on home soil this autumn.”

On Collie, Richards added: “Caroline’s inclusion is a real success story for the Betfred Women’s Super League South and shows some of the fantastic talent the competition has already pushed forward.

“We watched Caroline on several occasions, and she really impressed with her speed and agility. She’s a big running threat and has the ability and confidence to score tries from anywhere on the field while her frame also makes her a handful in general play for defenders.”

England Women are set to face France on Saturday June 18 at Warrington’s Halliwell Jones Stadium in a mid-season international double-header alongside the England Men’s clash with the Combined Nations All Stars.

Their Rugby League World Cup campaign will begin against Brazil at Headingley Stadium on Tuesday November 1. They will face Canada at Wigan’s DW Stadium on Saturday November 5 before a final group stage fixture back in Leeds against Papua New Guinea on Wednesday 9 November.