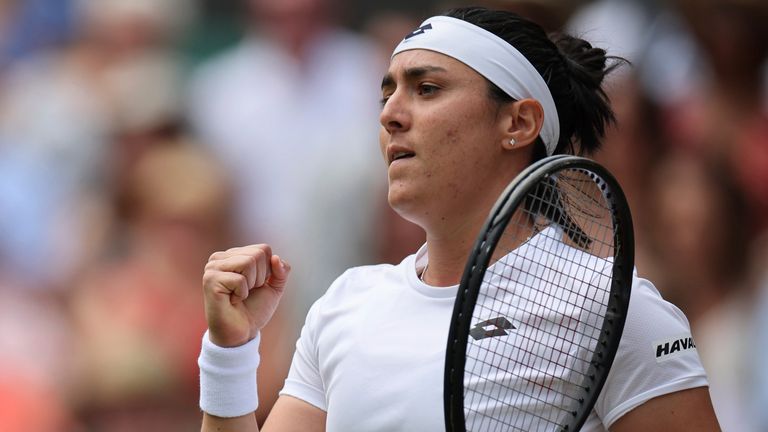 Ons Jabeur ended the magical run of good friend Tatjana Maria at Wimbledon to
move one victory away from creating her own fairy-tale story at the All England
Club; she remains on course to be the first woman from an Arab country and the continent of Africa to win a Grand Slam

The third seed became the first African woman and Arab player in the Open Era to advance to a major final by winning her 11th match in a row with a 6-2 3-6 6-1 victory over her good friend from Germany.

Jabeur has continued her excellent 12 months since winning the title in Birmingham last summer and then reaching the Wimbledon quarter-finals.

She is now up to three in the world rankings after a fine clay-court campaign and then another grass-court title in Berlin by making her maiden Grand Slam final.

Jabeur proved too good for Maria in the end but the mum-of-two went down fighting after bringing her remarkable 35th appearance at a major to its conclusion in the semi-final stage.

Maria had never made the second week of a Grand Slam before this summer and only gave birth last April but lost out to first-time finalist Jabeur.

Join us for coverage from the All England Club with our daily live blog through skysports.com/tennis our Twitter account @skysportstennis & Sky Sports – on the go! Available to download now on – iPhone & iPad and Android