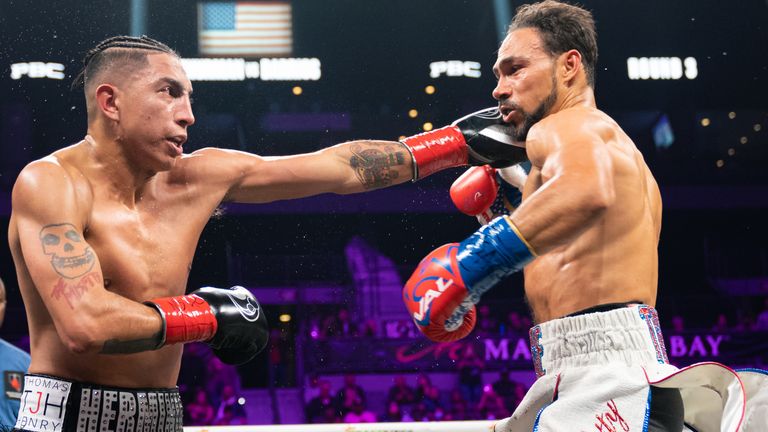 Keith “One Time” Thurman marked his return to the ring for the first time since 2019 by defeating former world champion Mario “El Azteca” Barrios by unanimous decision in Las Vegas.

Thurman, a former unified welterweight world champion and competing for the first time since losing to Manny Pacquiao in July 2019, got off to a strong start and never relinquished control in the 12-round contest.

Barrios (26-2, 17 KOs) had his moments in his welterweight debut, particularly in the eighth when a left hook to the body caused his opponent to back up, although Thurman showcased his heavy artillery and displayed the attributes that led him to the top of the 147-pound division.

“This was a comeback fight after two and a half years away,” Thurman said. “I wish I had my best performance, but I did the best I could under the circumstances. I grade this performance a C+ or B- for myself.

“We rocked him. We weren’t able to put him down and out, but we had a great performance and a great fight. I want the belts. I want the champions. I want to be back on top, so whoever is willing to send Keith Thurman the contract, let’s go!”

Jesse Rodriguez put on a clinical display to win the WBC world super-flyweight title against Carlos Cuadras at the Footprint Center in Phoenix, Arizona.

Rodriguez (15-0 10 KOs) lived up to the promise that had many pundits calling him the young fighter to watch in 2022 and entered his first-ever world title fight against former ruler Cuadras (39-5-1 27 KOs) as a replacement for the unwell Srisaket Sor Rungvisai.

‘Bam’ showed no signs of the task being too great despite moving up two weights for his first World title battle and indeed first scheduled 12-round action, and proved the point in the third round, with a peach of an uppercut floored Cuadras in the third round.

The 22-year-old showed dazzling footwork and unique angles to consistently clip Cuadras and stepped on the gas to drive his victory home at the end, taking the win 117-110, 117-110 and 115-112 on the cards to become the first boxer ever born in the 2000s to win a world title.

“That was a tough ass fight,” Rodriguez said. “He brought out a Jesse Rodriguez I didn’t know was in me, I’m so happy. I knew it was going to be a tough fight, he’s a true warrior, I thought I was going to get him out of there but he’s so strong.”