Thirlby: Learnings must be taken for Commonwealth stage 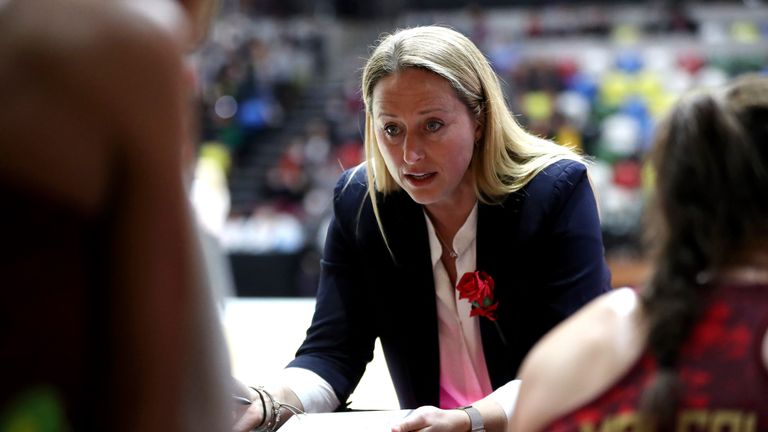 England’s Vitality Roses fell to a 58-46 defeat at the hands of Australia in the final of the Netball Quad series, despite going into the final quarter ahead; the Commonwealth Games starts on July 29 with England as the defending champions

Jess Thirlby has implored her England Vitality Roses side to learn lessons from their Netball Quad Series final loss for “much bigger stages” to come.

England’s head coach was speaking to Sky Sports following her outfit’s 58-46 defeat at the hands of Australia at the Copper Box Arena.

The defeat marks the Vitality Roses’ most significant loss at the hands of the Diamonds since 2016. However, the final scoreline was at odds with much of the match.

For three quarters, the home side asked significant questions of the world leaders and many times, had them on the back foot.

England led 41-40 going into the last 15 minutes but the Vitality Roses scored just five goals in the final quarter to 18 from the Australian Diamonds.

“Of course, it’s going to hurt, but we’ve just spoken about the fact that we know that we’re better than that,” Thirlby made clear after.

“I thought that it was great that we took the lead and got them chasing us for the majority of the game. Unfortunately, when you go down by that nature in the last 15 minutes, it’s not how you choose to do it. We went down fighting and gave it our best shot. We wanted to come here, know how to beat Australia and what it’s going to take. I think we have learned what beats them.

“I think that they had to be at their best in that last quarter, and huge credit to them. They went up another gear and we just fell apart a little bit, which is disappointing and it will hurt.

“The last quarter is certainly not the 15 minutes that we need to focus on, what we’ve done this week in the Quad Series has been incredible and I’m really proud of the group.”

Prior to their final loss to Australia, the Vitality Roses drew 48-48 with the world leaders in their last round-robin match of the competition. Before that, victories over New Zealand and South Africa highlighted their progression and the continued growth of their strength in depth.

However, the fact that England’s series finished on such a low note and with a staggering final quarter score against them, is something that Thirlby needs to make sure doesn’t hinder their preparations for the Commonwealth Games.

“There have to be learnings taken,” she noted. “If you want to be at the top table, then you have to win and lose and take it on the chin.

“You have to move on and take the learnings for much bigger stages down the line.”

For Thirlby, the coming period of time will feature a significant amount of analysis and thinking in terms of selecting the 12 players that will represent England in Birmingham and aim to defend their Commonwealth Games title.

“I’ve got versatility within the squad, I’ve got specialists and you can only take so many of those,” the head coach said.

“The players all have great domestic seasons ahead of them over the next few months, so it would be wrong of me not to afford them all a chance to show me a little bit more in those leagues.”

The Vitality Netball Superleague starts on February 5 and 6 with the ‘Season Opener’ weekend. Every match of the weekend will be live on Sky Sports and streamed on the Sky Sports YouTube channel.