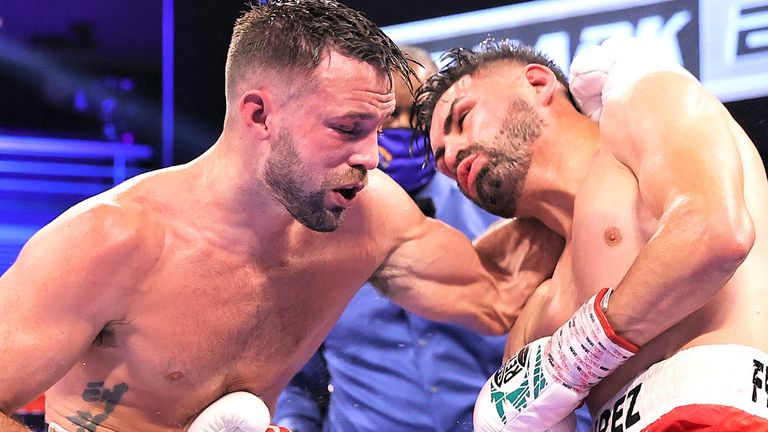 The undefeated Scotsman dropped Ramirez in the sixth and seventh rounds to seal a 114-112 verdict on all three of the scorecards as Taylor unified the WBC, WBA, IBF and WBO world super-lightweight titles in Las Vegas.

Taylor is only the fifth champion to hold all four belts in the sport, joining fellow elite fighters such as Ukrainian Oleksandr Usyk and American Terence Crawford.

Mexico’s Ramirez had troubled Taylor with his aggression in the early rounds, forcing the 30-year-old to the ropes, and opening a cut over the Scot’s left eye in the fourth.

Taylor produced a fiery response in the fifth, landing his hurtful left hand, which would turn the fight in his favour in the following rounds.

A lightning straight left sent Ramirez tumbling to the canvas, just 15 seconds into the sixth round, and he rose to his feet to defiantly trade punches with Taylor.

But Taylor then unloaded a crisp uppercut in the seventh, dropping Ramirez heavily, and the bell spared the Californian as he staggered following a perfectly placed punch.

Yet another left hand from Taylor’s southpaw stance caught Ramirez in the eighth, although he recovered to stage a spirited rally in the closing rounds, pumping out punches in the 10th.

But Taylor kept his composure in the closing rounds as he repelled Ramirez’s desperate assault to confirm an historic victory.

“I’ve got nothing but love for Ramirez. This week was no disrespect. It was all part of the mind games to get in his head, to make him more eager to jump in at me and be more aggressive, to use his aggression against him.

“I thought the scorecards were a little tight. I thought they were well wider than that. I wasn’t too happy with the selection of the judges, but I wasn’t going to moan. I was confident in winning this fight anyway.”