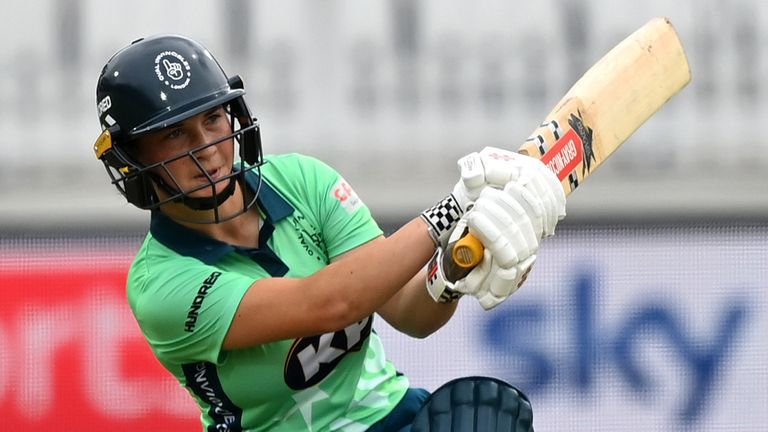 Sixteen-year-old Alice Capsey struck 59 from 41 balls on her Lord’s debut as Oval Invincibles triumphed in The Hundred’s first London derby against London Spirit.

STORY OF THE MATCH

Dane van Niekerk had rescued Oval Invincibles’ innings after three early wickets fell in the tournament opener and it was a similar tale at Lord’s – but the skipper played second fiddle this time.

Teenage opener Capsey took centre stage with a classy knock of 59 from 41 balls as she and Van Niekerk turned the Invincibles’ fortunes around with a partnership of 80 from 58 after slumping to 29-3.

Van Niekerk’s 29 helped the visitors to post 132 and that proved sufficient to make it two wins out of two as they triumphed by 15 runs, earning the status of early tournament front-runners.

Tight bowling by seam duo Shabnim Ismail and Tash Farrant – who conceded just 15 and 22 respectively – then pushed London Spirit behind the required run-rate from the start of their reply.

Home captain Heather Knight kept her side’s hopes alive with a valiant innings of 40 from 29 but, when she was caught in the deep off Van Niekerk – who finished with 3-30 – Spirit folded for 117.

Here’s one commentator Mel Jones never expected to see – hence her astonishment on observing the relaxation of MCC dress code for spectators in the Lord’s pavilion. ‘Wait a minute, there’s no jacket and tie!’

On the field, Fran Wilson‘s arrow throw from cover to dismiss Deepti Sharma cheaply was breathtaking and cemented the visitors’ advantage as Spirit faltered in the chase.

The single looked on, but Wilson took aim and scythed down the stumps as the batter stretched in vain, with bowler Dani Gregory displaying nimble footwork to get out of the way.

She’s still only 16, but Invincibles batter Alice Capsey showed maturity well beyond her years, striking a magnificent half-century on what she admitted felt like a ‘surreal’ Lord’s debut.

Capsey cracked her first ball over midwicket for four and used her feet to the spinners, with placement rather than power enabling her to craft an innings that was an absolute joy to watch.

True, Mady Villiers‘ stay at the wicket only lasted for a mere three balls, but the first of those was well worth viewing.

Villiers picked up Naomi Dattani’s short-pitched delivery perfectly and dispatched it into the grandstand for the only six of the Invincibles’ innings.

CATCH OF THE MATCH

Villiers was involved again, sending down her first ball of the Spirit run chase to Deandra Dottin, who immediately went to sweep her and got a top edge that sailed high into the slate-covered St John’s Wood sky.

Grace Gibbs, back-pedalling from backward square, kept her cool and her concentration as she watched the ball come down over her shoulder, eventually plucking it out one-handed and roaring with relief.

A mention too for the Invincibles’ substitute fielder Eva Gray, who charged from long on to hold an excellent catch on the run and remove Dattani just seven balls later.

We’re back at Trent Bridge on Monday for another thrilling double header, with the Rockets hosting Northern Superchargers.

The women’s teams clash at 3pm, with the men’s fixture getting under way at 6pm.

Watch both games on Sky Sports The Hundred and Main Event, as well as the Sky Sports Cricket YouTube channel.

Watch The Hundred live on Sky Sports this summer!