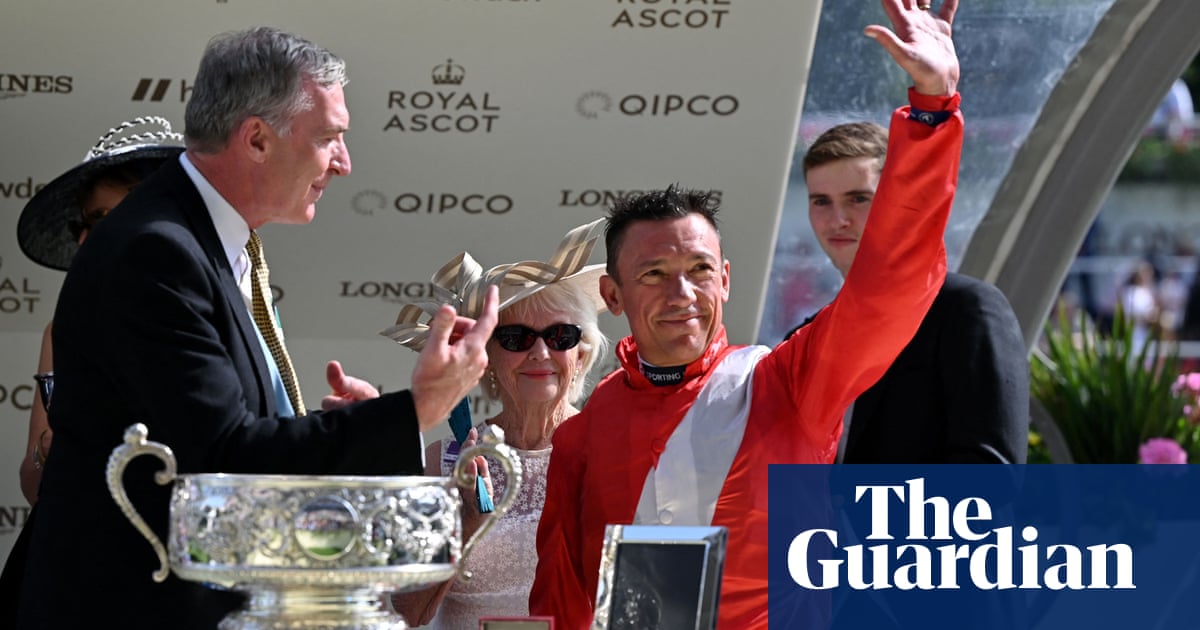 There is a scrolling electronic billboard a few hundred metres from Brighton station, positioned to catch the eye of tens of thousands of day-trippers heading home from the beach, and an ad for next month’s Glorious Goodwood festival is currently on the rotation. Amid the scenes of partying racegoers, photo-finishes and the track’s breathtaking downland setting, just one current jockey gets the honour of a snapshot all to himself and it is, of course, the only one who needs no introduction. Frankie Dettori shifts tickets for the races like no one else can.

Unless his “sabbatical” from the John Gosden yard is more like a long weekend, however, Dettori’s chances at Glorious Goodwood will be more limited than anyone could have imagined just a few weeks ago. The great stayer Stradivarius, who could well be making the final appearance of his career in the Goodwood Cup, will presumably have a fresh pair of hands holding the reins, and so too will Inspiral, the one bright spot in an otherwise miserable Royal meeting for the jockey, if she heads down to Sussex for the Nassau Stakes.

Since there is no obvious ride for Dettori among the main contenders for the Sussex Stakes, it is possible, perhaps even likely, that the most famous big-race jockey of the last three decades will be struggling for a partner, never mind a winner, in the meeting’s three Group Ones. And while his newly restored freelance status will make him an obvious candidate for spares and second-strings, he will be competing for openings with a whole host of others, all of them younger and possibly hungrier too.

Dettori himself insisted on Saturday that he will ride on at least until the end of 2023, and possibly spend more time riding in major races overseas. He is booked to ride for Charlie Appleby, Britain’s champion trainer, in the United States early next month – which will rule him out of at least one day at Newmarket’s July Festival – but assured Racing UK viewers at the weekend that “if you don’t see me riding domestically, it’s not because I gave up, but because I’m actually abroad”.

It would be a dreadful way to conclude the most storied and successful riding career of the last 30 years if Dettori’s big-race moments petered out over the next few months and he slowly disappeared from view. If anyone deserves to leave this most precarious of occupations on a high and at a moment of their own choosing, it’s Frankie.

But he knows as well as anyone that there are perhaps half a dozen top jobs that come with regular Group One opportunities guaranteed. He has just left one of those and is most unlikely to snag another, because a No 1 role tends to demand a level of six- or seven-days-a-week commitment that Dettori, it seems, can no longer supply.

Gosden’s widely reported comments on the state of their relationship last week suggest that this, as much as any mishaps at the Royal meeting, may have been the ultimate cause of the split. Dettori took time off in Italy on either side of the Royal meeting, and has taken just 89 rides in Britain in 2022. He also restricts himself almost entirely to Saturdays and Festivals – aside from the opening day at Royal Ascot, Dettori has had just eight rides on a Monday or Tuesday this year.

He has found himself in difficult spots before, of course, not least in December 2012, after parting company with the Godolphin operation, when Dettori was both jobless and about to start a six-month ban for a cocaine positive. With Gosden’s invaluable assistance, he clawed his way back to the top and enjoyed some of the most memorable days of his career, on horses like Enable, Golden Horn and Stradivarius.

Dettori’s most recent Group One win, aboard Inspiral in the Coronation Stakes at Royal Ascot, was his 280th success at the highest level and his 52nd for the Gosden stable since he launched his time as its principal rider with a Derby victory on Golden Horn in June 2015. For the first time in a decade, though, it is suddenly quite hard to see when or where the next one might arrive.