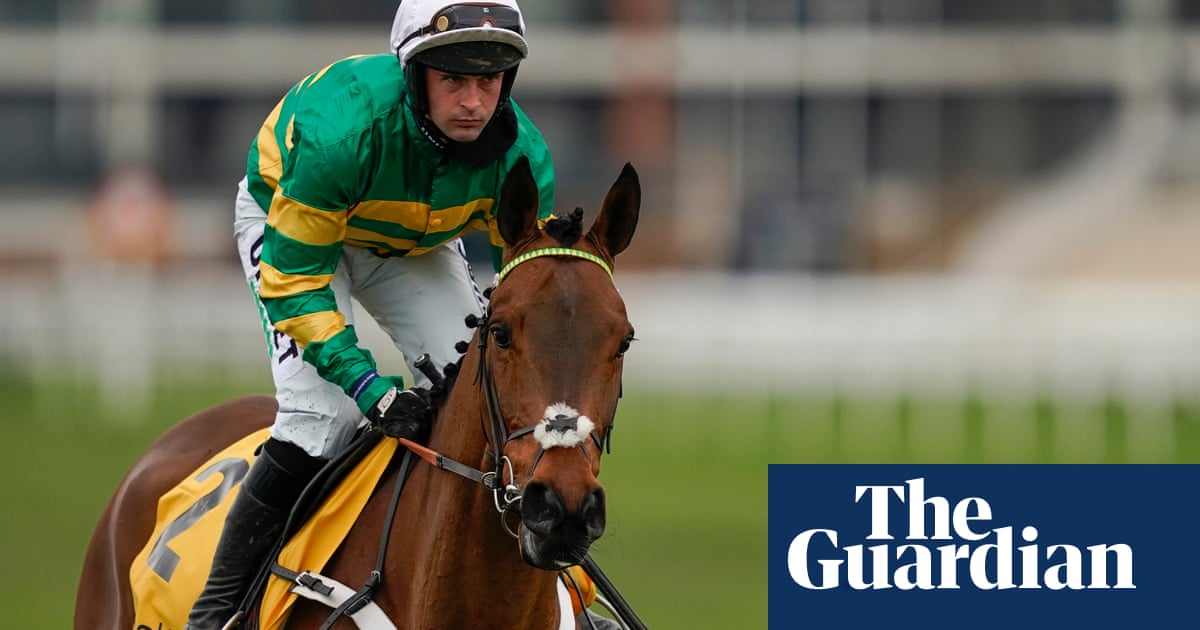 Champ has halved in price for the Cheltenham Gold Cup next month, thanks to a prep run here which was about as impressive as a beaten effort could be. Considering he had not raced for 11 months and was facing specialist two-milers when he wants to go half as far again, it was a serious effort to finish just two lengths behind Sceau Royal and he is now 6-1 second-favourite for the Festival highlight, having been 12-1 hours before.

Some were inclined to fear Nicky Henderson had forgotten how to train when the Lambourn man announced Champ would line up in the Game Spirit rather than the longer Denman. The horse had, after all, looked every inch a stayer when making a late charge to land the RSA last March and there was every reason to worry that his jumping would suffer at two-mile pace, Champ having put himself on the deck two races ago.

“It won’t surprise you to learn that we’ve been working on his jumping,” was Henderson’s dry remark on the subject. Champ has been a regular at Henrietta Knight’s academy this winter and he has evidently been an apt pupil.

“His jumping was flawless and that was the thing that needed ironing out,” Henderson said, which was going a shade too far because the horse was riskily exuberant early on and also made a mistake at the last fence. But he showed fine athleticism to get himself out of trouble and ought to be better again when settling behind a slightly slower pace next month.

“That’ll have done him the world of good,” Henderson said. “He hasn’t had a hard race because he was on the bridle until nearly two-out.

“When he comes to a racecourse, it’s like flicking a switch. What he does at home would not inspire you. If he did a canter up the all-weather, you wouldn’t give me sixpence for him. If he does it up the grass, you might give me two and sixpence.”

The Denman threw up a shock result, Clan Des Obeaux failing by a neck to reel in his stablemate Secret Investor. A 14-1 shot, the winner was ridden for the first time by Bryony Frost, who showed once again how dangerous she can be when allowed to dictate the pace. Paul Nicholls, who trains both horses, had told her: “Just ride him like you do Frodon.”

The pair are likely to meet again in the Betfair Bowl at Aintree, so Frost may keep the mount. Only a handful of horses at Nicholls’ yard are clearly hers to ride but she can generally be relied on to help them improve.

Unhappily, The Conditional sustained a fatal leg injury early in the Denman. He was the star talent at David Bridgwater’s Gloucestershire yard, where his loss will be sorely felt.

Meanwhile, Tiger Roll did nothing to excite his many fans in the Boyne Hurdle at Navan, his traditional prep race on his way to Cheltenham and Aintree. The 11-year-old dropped out very tamely in the straight and, although Gordon Elliott insisted he was not concerned, one firm pushed him out to 33-1 for a third Grand National success.

Mill Race King (1.35) is in danger of becoming a cliff horse for me but I’m not giving up on this points winner yet and he’s worth another chance on his third attempt over fences at Carlisle. He was getting into the argument when capsizing at Leicester, then got tired in the Wetherby straight on Boxing Day after tanking his way into contention with almost a circuit to go.

The amateur who rode him on those days may have been a little overhorsed. Or possibly Mill Race King takes a lot of getting fit. Callum Bewley takes over in the saddle and the horse steps back in distance by half a mile, both of which should help. Some obliging handicapper has dropped him 5lb.

It could be a good day for Tim Easterby, as his Multellie (2.10) has attracted support from the early 14s into 9-1. His three previous runs at Carlisle have yielded two wins and a second, his best hurdles form to date, and he’s dropped a few pounds for a couple of runs elsewhere before Christmas.

At Southwell, Beauvallon Bay (3.20) is an interesting handicap debutant from the in-form Amy Murphy yard. He’s been running as though this step up to three miles is absolutely necessary and 13-2 is fine.