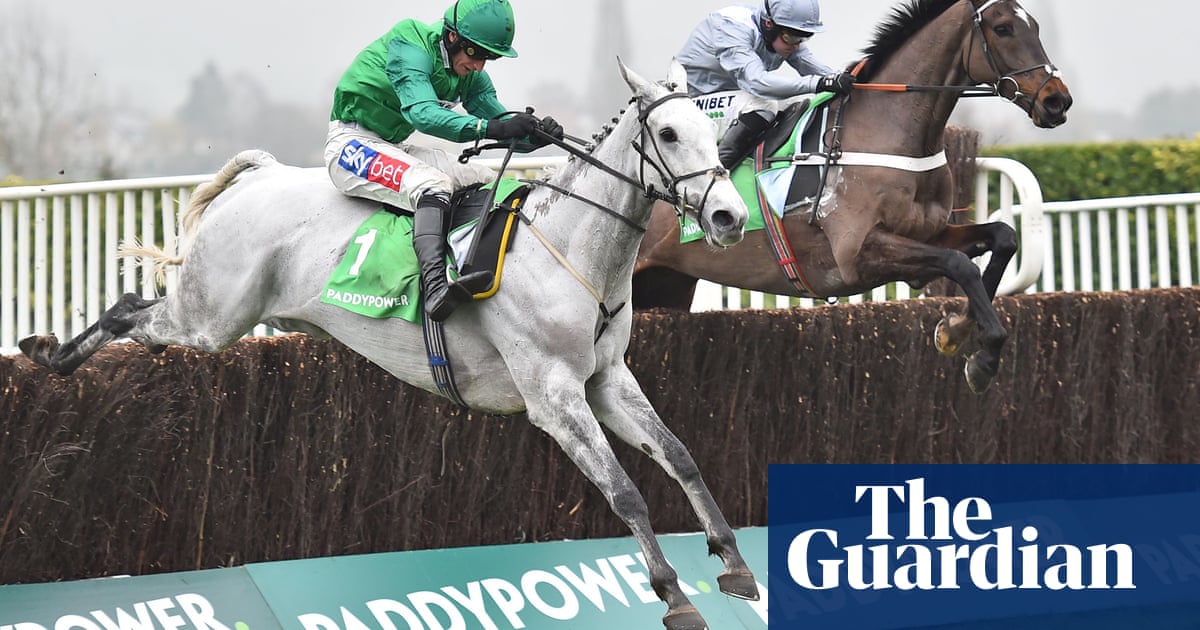 “Bristol De Mai will be rubbing his hands,” was the view from Nicky Henderson this week as he contemplated the rearranged Cotswold Chase, to be run at Sandown on Saturday. The trainer of Santini clearly believes he would have had a better chance of beating the grey if this race had taken place last weekend at Cheltenham, where Bristol De Mai (2.20) has never won.

Santini looked laboured on his only previous visit to Sandown and his lack of pace was again an issue in the King George. Bristol De Mai, who won a Grade One here as a novice, might find this race being nicely set up for him by front-runners Yala Enki and Native River. Saint Calvados would be tempting if his stable had had a winner since November.

1.15 Sandown Paddy’s Poem impressed here last time but is 5lb out of the handicap. Preference is for Billingsley, who is being shunned in the betting after two non-completions but has plenty of ability.

1.35 Leopardstown This looks another straightforward task for Chacun Pour Soi, who has only been beaten once since joining Willie Mullins and holds Notebook on their Christmas form. Min must always be respected but couldn’t cope with the favourite in this race last year.

1.50 Sandown This is a really hot Scilly Isles. Shan Blue is understandably favourite but the Kauto Star worked out well for him and the level of that form is far from unmatchable. Messire Des Obeaux has more doubters because of his age and injuries but his Wincanton defeat of Protektorat was really classy and he was a Grade One performer over hurdles. Dame De Compagnie might be the best of these in time but she has faced just one rival over fences so far.

2.05 Musselburgh The New Year’s Day race in which Newtown Boy chased home Navajo Pass looks a bit better than it did at the time, the winner having been enterprisingly ridden to win at Haydock. Newtown Boy gets to compete off the same mark here at a track that clearly suits him and he made it two from two under today’s jockey in a jumpers’ bumper a fortnight ago.

2.30 Wetherby This rearranged Cleeve Hurdle has attracted an odd-looking entry, full of horses more familiar as steeplechasers, and one of their number can prevail. Itchy Feet found the fences getting in his way at Ascot before Christmas but still ran to a high level and that was not the first time his run-style suggested a step up to this sort of distance. He was a staying-on third in the Supreme a couple of years ago and gets a handy 4lb from On The Blind Side.

2.55 Sandown He may be among the oldest in the field but Clan Legend is not completely exposed over fences and his Aintree win last time was a career best by 5lb. Given plenty of time to get over that, Nick Alexander’s chestnut looks a big price here.

3.15 Leopardstown A badly timed mistake is blamed by connections for the disappointing effort by Sharjah in last year’s Irish Champion Hurdle. He was back on song here at Christmas and, at the odds, it may be worth chancing him against Honeysuckle, who was only workmanlike when last seen.

3.30 Sandown It’s a pity that Danny Whizzbang’s career seems to be fizzling out and he can only be watched here as connections reach for the cheekpieces. Ask Me Early is a more reliable sort and can boss this from the front.

3.45 Musselburgh Le Breuil’s connections want to get him up the weights so he can claim a place in the Grand National field, which is why he’s here just three weeks after a big effort in testing conditions at Warwick. This speed-favouring circuit is against him and taking a short price does not appeal, while The Ferry Master also looks short enough as he steps out of novice company. Dino Boy is more like it, as his win last time suggests he has more to offer at marathon trips, but his tendency to jump left is a niggling concern. CC

Two of Saturday’s three National Hunt fixtures, including the all-chase card at Sandown Park, depend on inspections at 8am on Saturday morning, ahead of a week when snow threatens to replace rain as the biggest threat to the racing programme scarcely a month before the Cheltenham Festival.

The straight at Sandown was reported to be “waterlogged in places” by Andrew Cooper, the track’s clerk of the course, on Friday morning. Conditions improved sufficiently by the time of an initial inspection at 3pm to move a decision to Saturday, although Cooper is also aware of the “potential for overnight rain”.

Sandown’s card is due to include both the Grade One Scilly Isles Novice Chase and the Grade Two Cotswold Chase, rescheduled from the abandoned card at Cheltenham last Saturday. Another race due to be run on that card, the Cleeve Hurdle, has been re-routed to Wetherby on Saturday, but that too is subject to an 8am inspection.

After the first inspection on Friday, the clerk of the course, Andrew Cooper, told the Racing Post: “We’ve made one or two further modifications, narrowed one or two more fences, put up other bits of running rail and we’ve had a look at the course accompanied by the BHA course inspector and we felt as things stand you would give it a go and race on it now.

“It has settled down, improved a bit and lost some of the surface wetness from first thing. It’s been a lovely, dry and sunny day. There is not too much rain forecast overnight, most say there could be the odd light shower around, maybe up to 2mm of rain, and that would be okay.”

“There is the lingering risk of further rain perhaps from late morning or lunchtime which could be a little more persistent and heavier,” warned Cooper.

“That could be 5mm-plus so we’re certainly not out of the woods yet. But we must and will give it every chance. We’ve got ourselves into a position where I think we have a chance of getting it on.”

The first day of Musselburgh’s valuable two-day meeting of Cheltenham trials is the only Saturday card over jumps which does not have an inspection scheduled as yet. The second day, however, which includes trials for the Supreme Novice Hurdle, the Triumph Hurdle and a qualifier for the Pertemps Hurdle Final, is subject to an 8am inspection due to the threat of snow arriving in Scotland on Saturday night.

Snow is a distinct possibility for much of the country in the early part of the week, and the card at Sedgefield next Wednesday has already fallen victim to waterlogging.

The Dublin Racing Festival at Leopardstown, however, is forecast to be run in relatively balmy conditions on Saturday and Sunday, with eight Grade One races to fire the enthusiasm of punters on both sides of the water and several of the sport’s biggest names in action.

Chacun Pour Soi, the hot favourite for the Queen Mother Champion Chase on 17 March, is odds-on for the first Grade One of the weekend, the Dublin Chase, while Honeysuckle, the 10-1 third-favourite for the Champion Hurdle, will put her unbeaten career record on the line against course specialist Sharjah in the Irish Champion Hurdle later in the afternoon. GW