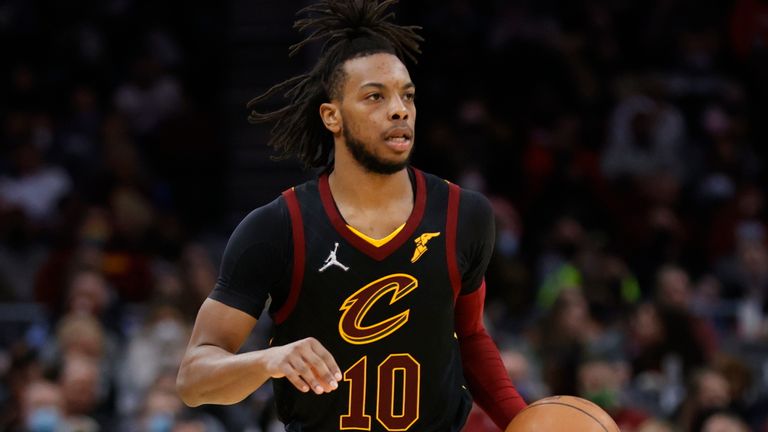 Mikal Bridges scored 23 points and Bismack Biyombo added 21 points with 13 rebounds as the Phoenix Suns extended their winning streak to six games with a 113-103 victory Saturday over the visiting Indiana Pacers.

Chris Paul added 18 points with 16 assists as the Suns won for the ninth time in their last 10 games on their return home from a perfect five-game road trip.

Phoenix won on an off-night for leading scorer Devin Booker, who finished with 11 points while shooting 5 of 23 from the field.

Chris Duarte and Lance Stephenson each scored 17 points for the Pacers and Goga Bitadze added 16 with 11 rebounds, but the Pacers were not able to match the effort they delivered Thursday in a victory at Golden State.

Darius Garland had 23 points and 11 assists to lead the Cleveland Cavaliers to a 94-87 win over the Oklahoma City Thunder.

Garland had finished with at least 20 points and 10 assists in four straight games.

Rookie Evan Mobley added 15 points and a season-high 17 rebounds while Jarrett Allen contributed 14 points and 13 rebounds as Cleveland won for the sixth time in seven games.

Thunder’s loss was their fifth in a row and their 12th in their last 14.

Garland took over in the third quarter, with 13 points and three assists, all of which came during a stretch that lasted a bit more than five minutes as Cleveland’s lead swelled from two at halftime to as much as 17 late in the third.

The All-Star duo maintained the Bucks’ winning streak with Giannis Antetokounmpo sidelined due to a sore knee.

Middleton finished 12-of-20 shooting and Holiday went 10-for-20 from the field, while Donte DiVincenzo chipped in 20 points off the bench, George Hill had 17 and Pat Connaughton tallied 15.

The Bucks recorded their worst shooting performance from 3-point range of the season in Friday’s win against the Bulls but bounced back against Kings, making 21-of-42 (50 percent) shots from beyond the arc.

Harrison Barnes paced the Kings with 29 points and six rebounds on 11-of-18 shooting. Tyrese Haliburton poured in 24 points to go with six rebounds and 12 assists and Terence Davis notched 22 points.

Sacramento would get within three points in the fourth quarter after Haliburton sunk a pair of free throws, but the Bucks warded off a potential comeback.