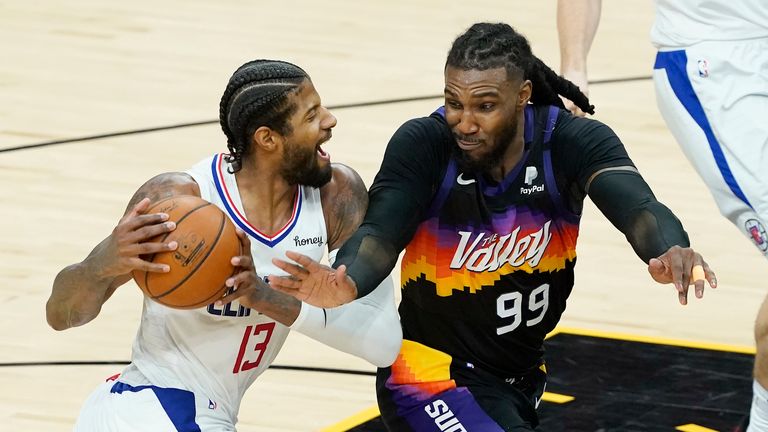 Perhaps the most memorable milestone of the 79-game run (21 wins, 38 losses with a poor team) during the 2017-18 season came in a game on December 26, 2017, when the Canadian became the first foreign-born head coach in NBA history to win 100 games in the league with a 99-97 win over the Memphis Grizzlies.

But it wasn’t so much the landmark as the way it was achieved.

The Phoenix Suns found themselves level with 0.6 seconds left on the clock and Dragan Bender set to inbound. Triano ingeniously took advantage of the little-known rule that you cannot goaltend on an inbounds play and got the young Croatian (now back in the EuroLeague with Maccabi Tel-Aviv) to deliver a pass right above the basket ring for Tyson Chandler to slam home the game-winner.

At the time, the play – dubbed ‘Rim’ – went viral, with clips even appearing on the US network juggernaut the Today Show, given the nature of the game-winning play. And a variation of that play from the Triano playbook helped the Phoenix Suns take a 2-0 lead over the Los Angeles Clippers in the Western Conference Finals on Tuesday night.

“I was trying to create a play, where you can score with like three-tenths of a second left or something and I just thought tonight was a good time to do it,” Triano said in his post-match briefing back in 2017.

“I put it in, probably two or three days after I took over the job here. It’s a rule that a lot of people don’t know. You cannot goaltend the ball that isn’t going to count so I tell the guys to shoot the ball in the basket and all Tyson has to do is touch it on the way down or grab the rim, have it hit your knuckle, and go in.

“I asked the officials when they come and do their clinics and seminars with the coaches, 15 years ago in Toronto, and they had to go back and look at it and I’ve tried to keep it a secret but it’s not a secret any more.”

Shout out to Coach Jay Triano! After practice 1 day he was kickin random NBA facts to me and was like “ did you know theres no goaltending on a out of bounds play?” I was like really?? Nooo he said look it up.. 3 weeks later we found or selves in that situation

Back in 2017, the Suns put Chandler, Marquese Chriss, Troy Daniels and T.J. Warren in a diamond formation to create some spacing on the floor. Bender would make the inbounds pass because of his size (7-1) and love for the sport he grew up playing in Croatia.

“I played a lot of soccer, and it was like a throw-in,” Bender said to azcentral.com. “It came in handy, for sure.”

And it’s been given an even better name: the ‘Valley-Oop’.

In a flash, the Phoenix Suns stunningly seized a one-point advantage on an out-of-bounds play that had started with less than a second remaining on the game clock. A lengthy officials’ review then confirmed the basket, sending a Phoenix Suns Arena crowd that has been raucous throughout the postseason into an absolute frenzy.

“Jae set it up right there perfectly,” Ayton said. “I tried to set up (Ivica) Zubac for Book to have a good angle on him. And I believe once my feet touch the paint where I can go off right-left, one-two, I mean, not many people are gonna be up there with me.”

Suns coach Monty Williams said his team had never walked through that specific alley-oop play, and called it a blend between a play former Philadelphia 76ers coach Brett Brown used to run when Williams was an assistant on that staff in 2018-19 and a Tyson Chandler game-winner during the Suns’ 2017-18 season.

“I wish I was that bright, but I’m not,” Williams said. “I steal from everybody.”

“It was just one of those things that happens where you’re just grateful for it. The will of our guys to just stay with it, I don’t think we played great tonight, but we made enough plays to win the game. It was unreal execution at the end, and for us, the mental stamina to just stay in there and not give up when it looked like it wasn’t gonna go our way.”

Booker added: “Even talking to (Rajon) Rondo at halfcourt after the (play), he was like, ‘It don’t count.’ I was like, ‘I’ve seen this movie before (with Chandler’s game-winner). It counts.’