Stones sent off but City fight back at Villa 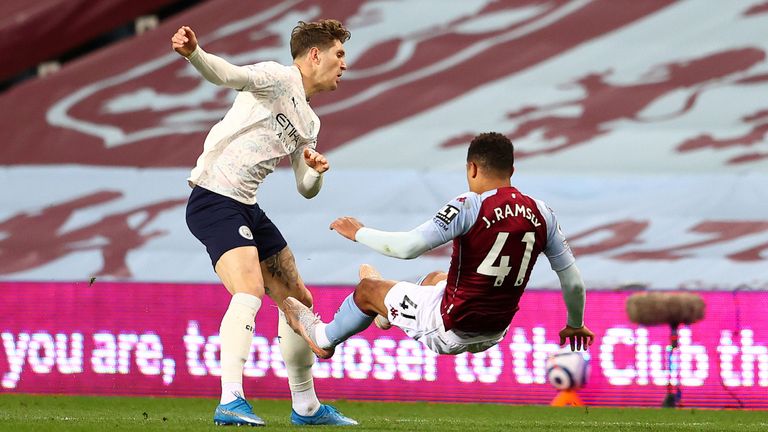 Manchester City are now eight points away from winning the Premier League after fighting back from a goal down to beat Aston Villa 2-1, despite John Stones seeing red.

Villa took the lead after just 20.82 seconds through John McGinn’s sweeping strike, the second-fastest goal of the Premier League season, but City fought back through Phil Foden’s finish to a nice move (22) before Rodri glanced a header home after Emiliano Martinez missed his punch (40).

Stones, whose error had led to Villa’s opener, then saw red with the help of VAR after a late, high challenge on Jacob Ramsey (44), meaning he will miss the Carabao Cup final on Sunday against Spurs, live on Sky Sports.

Villa had the numerical advantage for all of 13 minutes as Matt Cash received two yellow cards within three minutes (54 and 57), but neither side created much of note in the second period as City held on to win.

It means if City and second-place Manchester United keep winning, Pep Guardiola’s side will be crowned champions for the third time in four years after their game at Newcastle on May 12. Villa stay 11th, seven points off the top seven but with a game in hand, having won just one in seven.