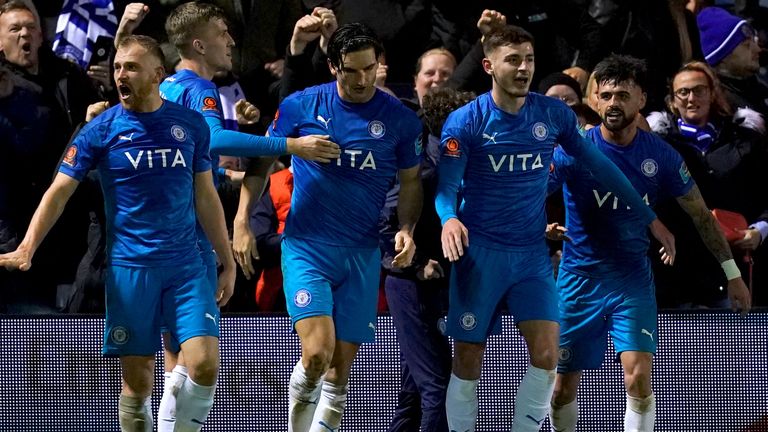 Stockport produced an incredible fightback as they stunned League One Bolton 5-3 after extra-time in the FA Cup.

Dave Challinor’s National League side came back from 3-1 down to seal a second-round trip to Rotherham, although a late pitch invasion could well see Stockport in trouble with the Football Association.

The majority of County’s biggest crowd in over a decade were stunned by a blistering start from Bolton.

After 70 seconds, Elias Kachunga went on a superb solo run before firing home from 25 yards via a deflection off home defender Mark Kitching.

The lead was then doubled when Ash Palmer could only turn Josh Sheehan’s driven cross into his own net.

The hosts halved the deficit in the 24th minute as Paddy Madden slotted home a penalty after Lloyd Isgrove had tripped Ryan Rydel.

However, another defensive calamity saw Amadou Bakayoko tap into an empty net to make it 3-1 after Kitching attempted to head back to goalkeeper Ethan Ross.

Stockport bossed the third quarter of the game, with Quigley lashing narrowly over the top.

However, they did not level until the 86th minute when Palmer powered home a header from Rydel’s corner.

Quigley dramatically made it 4-3 to Stockport in the first half of extra-time when he expertly hooked home, before substitute Ollie Crankshaw’s last-gasp breakaway fifth sealed a memorable victory.