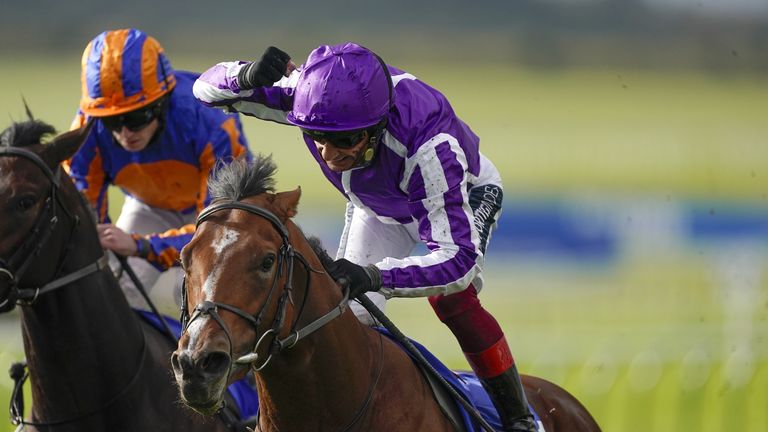 He also won Three-year-old Colt of the Year, having collected over £1.8 million in prize money in 2021, and heads to Coolmore Stud to stand as a stallion.

Aidan O’Brien also took the Three-year-old Filly of the Year with Dual Classic winner Snowfall, who put in a remarkable performance to win the Epsom Oaks by 16 lengths, a record for the race.

Three-year-old Filly of the Year – Snowfall

Sprinter of the Year – Starman

Stayer of the Year – Trueshan

Two-year-old Filly of the Year – Inspiral

She also won the Irish Oaks and Yorkshire Oaks, before being beaten in her final three starts of the season.

The Cartier Older Horse of the Year was won by Palace Pier, who landed three Group Ones in 2021 before a narrow defeat to Baaeed in the Queen Elizabeth II Stakes, the only race he was beaten in for John & Thady Gosden.

July Cup winner Starman took the Sprinter of the Year, with Ed Walker’s star speedster also finishing a narrow second in the Haydock Sprint Cup and third in the Prix Maurice de Gheest.

Trueshan landed two Group One races in 2021 and was a deserved winner of the Stayer of the Year for Alan King. He took the Goodwood Cup in July before defeating Stradivarius in the Prix du Cadran and again in the Long Distance Cup on Champions Day.

2000 Guineas favourite Native Trail won the Two-year-old Colt of the Year, having remained unbeaten in four races for Godolphin and Charlie Appleby, landing the National Stakes at the Curragh and Dewhurst Stakes at Newmarket.

Inspiral – who heads the 1000 Guineas market – was the Two-year-old Filly of the Year winner for John & Thady Gosden, after winning the Fillies’ Mile at Newmarket last month in dominant fashion.