Spieth hoping to stay the course 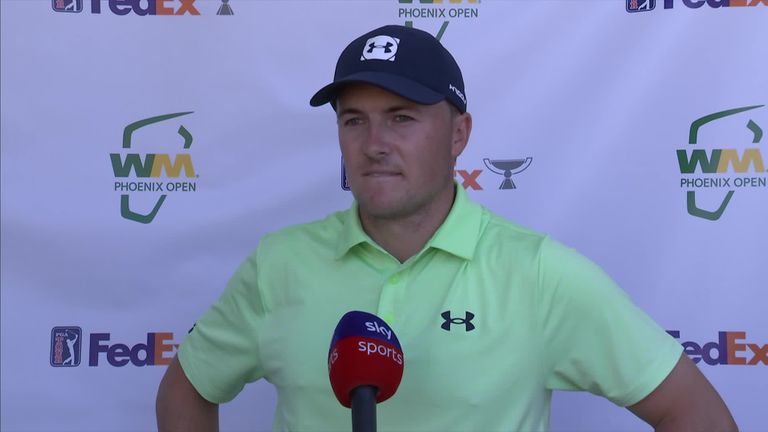 “What I’m looking forward to is just staying the course, trusting it. I have no expectations on the results tomorrow. I really don’t. I feel really good about the path I’m on and what the long-term ahead looks like for me”

A week after feeling “in a low spot” after missing the cut at Torrey Pines, Jordan Spieth was celebrating a career-best performance that propelled him into the lead at the Waste Management Phoenix Open.

Spieth has endured a dramatic downturn in form since having his name etched on the Claret Jug following his memorable Open victory at Royal Birkdale in 2017, and he arrived at TPC Scottsdale in the verge of dropping out of the world’s top 100.

But his sublime short-game was the key feature of back-to-back 67s, and Spieth thrilled the 5,000 fans on site in Arizona with a 10-under 61 on day three – the best round of his PGA Tour career earning him the 54-hole lead for the first time in two-and-a-half years.

Spieth has not gone into the final round on top of the leaderboard since The Open at Carnoustie in 2018 when he played alongside Xander Schauffele, who will also be his playing-partner on Super Bowl Sunday.

Four birdies in six holes took him to the turn in 31, and he then pitched in for a bonus birdie at the 10th having gone long and left with his approach, although his long game returned at the next as he came within a few inches of holing his 170-yard second.

Spieth missed a four-footer for eagle at the 13th, but he atoned with two huge putts after his eighth birdie of the round at 15, draining a 35-foot effort for a two at the famous 16th that would have raised the roof had the usual compliment of 20,000 fans been in the stands surrounding the loudest par-three in golf.

And, after spraying his tee shot way right at the 17th, he chipped cautiously to 25 feet and poured in that putt as well to get to 18 under, a score later matched by Schauffele when he picked up four shots in five holes late in the day.

“I feel good,” Spieth told Sky Sports Golf. “I was in in a pretty low spot after missing the cut last week when I really just had a bad back nine and I felt like I was making progress in each round.

“So to come here in the first round and hit it so poorly but shoot four under, I just felt like I had a little space. And then to make the cut and feel like you have Saturday these kind of conditions to make a run, I just felt like I stayed really, really patient and struck the ball well.

“To shoot 10 under you’ve got to do a lot right, but I also got quite a few really good breaks. I mean, each shot that ended up in the desert, I think I ended up playing those holes in two or three under when I could easily have ended up in a cactus with an unplayable lie.”

Spieth insisted he had “no expectations” heading into the final round, and he is just looking forward to the experience of being in the final group on a Sunday for the first time since stumbling to a 76 at Carnoustie and finished four behind Francesco Molinari.

“What I’m looking forward to is just staying the course, trusting it,” he added. “I’ve built some freedom now seeing these results the first few days here to where I feel really good about the path I’m on. I feel good about what the long-term ahead looks like for me. And sometimes that’s been in question, to myself.

“It’s funny, I think the last time I was in the final group of a tournament was with Xander in the 2018 Open, so hopefully we both play a little bit better than and get a you better result than we did then.

“But I should be comfortable. I didn’t look at a scoreboard today and probably won’t tomorrow. It’s just about going out there and trusting what I’m doing. I know that I’m going to hit some really nice shots that will build confidence and some aren’t going to be the best, and that’s where I am right now.

“I know I can get the job done based on a round like today.”