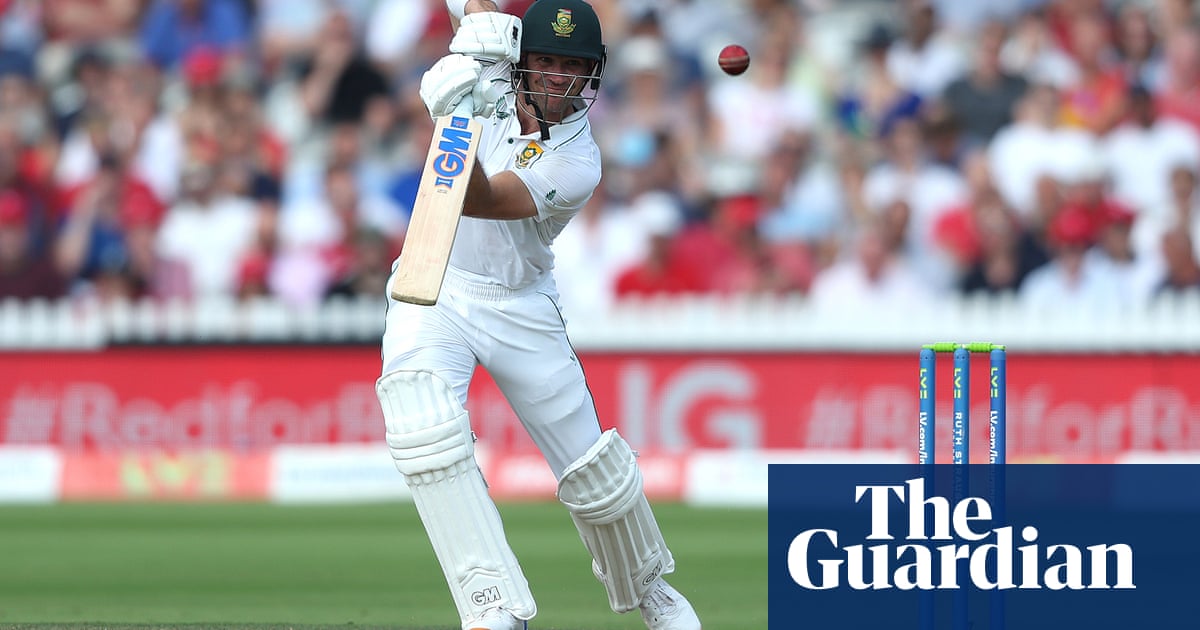 So there is a story about Sarel Erwee, and how he used to hang with the South African middle-distance runner Andre Olivier when they were kids. Their fathers had played Currie Cup rugby together for Natal back in the 1980s, but the kids’ game was cricket. They used to play it on the strip in front of the Erwee’s garage door, and they had three house rules. One was that if you hit it over the fence it was a six, another was that if you hit it into the flower beds it was a wicket, and the last was that before you started they both had to nominate who you they were going to be and then try and play like them too.

Olivier always used to choose Allan Donald, and Erwee, well, he used to want to be Gary Kirsten. “Many times I would not be able to get him out,” Olivier told the journalist CS Chiwanza, “in the end, he would just retire and give me a go.” It is a choice which raises all kinds of questions, the most obvious of them being: “Why?” He could have picked Herschelle Gibbs, Lance Klusener, even Jacques Kallis. But instead he went for Kirsten, the man who played some of the most bum-numbing innings in the history of the game, 275 off 642 balls at Durban in 1999, 210 off 525 at Old Trafford in 1998, 130 off 323 at Headingley in 2003.

What kind of a child grows up wanting to bat like that? It is unnatural. Like choosing to do long division, or helping yourself to another plate of steamed vegetables.

Well, we found out all about it on the second day at Lord’s, which felt like one long lesson in the merits of GazBall. Erwee batted for four hours or so, faced 146 balls, and scored 73 runs, although he is one of those batsmen who seems to make time go more slowly, and the interminable afternoon session, when England seemed to be flat out of ideas about how to get him out, felt like it might have stretched on into autumn. It was a fine innings, albeit one that a lot of people at Lord’s decided was best viewed from the TV screens positioned by the bars around the back of the ground.

They will have been watching raptly down at the Cricket Green in Weybridge. Erwee has been playing in Surrey Premier League since 2013, and warmed up for this series with a string of innings for Weybridge CC against the likes of Malden Wanderers and Reigate Priory. Which is not how you typically go about preparing to face up to England in a Test at Lord’s. It was only a couple of weeks ago that Erwee was batting against the mighty East Molesey CC, who, to be fair, do have an international attack in that their opening bowler Andrew Westphal has won five caps for Mexico. East Molesey did better than England, and dismissed him for 35.

It is a sweet, strange story in an age when the brightest young players are taking the shortcut into franchise cricket; Erwee went the long way around. He spent years playing as a semi-professional, while his friends in the game moved on ahead of him. He only got a start at Weybridge because David Miller had to drop out and suggested they get Erwee to replace him at the last minute. He did, scored four consecutive centuries, and has been a fixture ever since. He has played almost 100 games for them now. But it wasn’t exactly the career he had been dreaming of back when he was batting in front of his garage.

Erwee is close mates with Jason Roy, has been ever since they spent time together at a cricket academy back in 2012. Roy ended up making his T20 debut for England just a couple of years later, and spent the years afterwards lighting up international cricket while Erwee slogged away in South Africa’s domestic set-up and spent his winters rattling off runs around the home counties. He’s spoken a lot about how he ended up with depression because he felt his career had stalled, and said he almost quit the game in 2019, right around the time Roy won the World Cup, because he was so fed up waiting for a break that never came.

Then he hooked up with a good psychologist, and after working with them through the pandemic, ended up coming out of lockdown a better, hungrier player. His form finally won him a call up in 2021, and he finally made his debut on a tour of New Zealand earlier this year. He made a century against them in his second game, too. And now here he was, 32 and opening the batting at Lord’s. He was doing it well, too, a little scratchy, perhaps, with a few miscues and edges, but there were a handful of crisp boundaries as well, like the four through the covers off Broad that brought up his fifty.

His century was just about beginning to feel inevitable when Ben Stokes finally ripped him out with a brutal short ball. The game can be cruel that way, but then, you guess after everything has been through Erwee has known worse already.