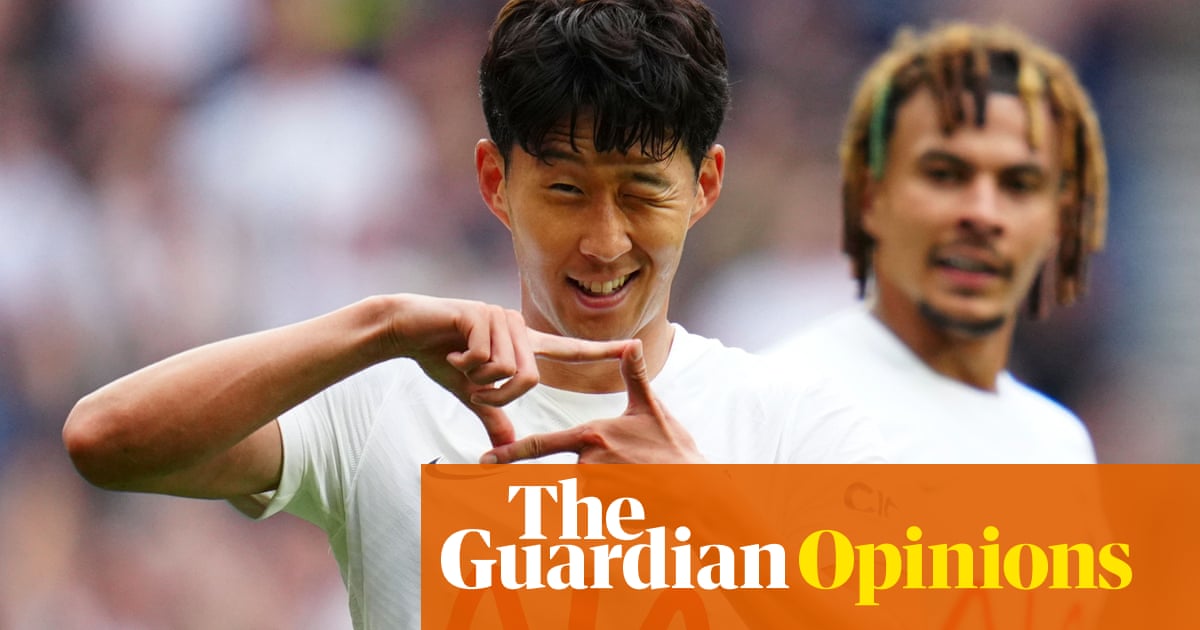 So let’s talk about the restaurant scene in the Son Heung-min documentary starring Park Seo-joon. What do you mean, you’ve never seen it? You know the one: the classic restaurant scene, from the 2019 docu-series Sonsational, which Son filmed for the South Korean broadcaster TVN. You know. The bit where he’s eating barbecue in Soho with one of the most famous actors in Korea. And suddenly, in the middle of this noisy restaurant, there’s this incredibly human moment between them, a fleeting glimpse of meaning and connection in their odd, hermetic existence.

“I don’t even know how I played today,” Son reflects. “It is just another day passing by.”

“You played well,” Park reassures him.

“After the game is finished, I often feel empty,” Son explains. “There is emptiness coming in. When I get home, it’s so silent. It’s quite intense. I feel so empty.”

And lived through Son’s lens, life must feel curiously alienating. Back at home, Son is famous on a level we struggle to imagine. There is apparently a nightly programme on South Korean television called Super Son Time, which consists entirely of Son’s greatest matches, edited down so only his chances are included. During live coverage of Tottenham games, the broadcaster displays an image of Son’s face at the top of the screen to indicate that he is still on the pitch.

That’s one side of Son’s fame. But it’s fame at a glazed remove, mediated by distance and the thickness of a screen. He can sense the madness and the fervour on the other side, can feel the phone in his pocket burning red hot. And then he logs off, puts his jacket on, walks out of his Hampstead front door and – nothing. There’s another moment in the documentary when they’re walking through Leicester Square, and Park can’t quite believe the audacity of what they’re doing. “Do you just walk around like this?” he asks incredulously. “I usually walk around casually in the city centre,” Son replies, and so they are: just these two global stars with a combined Instagram following of 24 million, strolling through London entirely unmolested.

I suppose the point is that Son isn’t really a star here, certainly not in a way that feels commensurate to his talent, certainly not on the level of a Mohamed Salah or a Paul Pogba or a Pierre-Emerick Aubameyang. Which must feel doubly weird: isolated by his immense fame in Korea, isolated by his relative lack of it here. And in a strange way, perhaps you can glimpse that conflicted identity in the way he plays football: that blinding individual talent infused with a longing for connection and tactile relationship, the blend that has turned him into one of the world’s most complete forwards.

You can see the latter in the way he enables and combines with the players around him: the smart decoy runs, the unselfish passing game, the modesty with which he deflects the credit on to his teammates, the way he uncomplainingly fits in wherever he is required. But there is a singular, brilliant star quality to him too: the raw speed, the deadly finishing, the spectacular solo goals like his curling effort against Manchester City on Sunday, or the lightning 60-yard run against Burnley that won him the Puskas Award in 2020.

Son the player is a talent who demands centre stage. Son the man craves being part of something larger. And so here comes the complicated bit. Ever since Son arrived in England, Tottenham has already had a clear alpha male, and it’s not him. Harry Kane embodies a more conventional idea of English football stardom: the talisman, the natural goalscorer, the homegrown hero, the national obsession, the 24-hour conversation. He’s the star when he plays and – as we saw at the weekend – the star when he doesn’t. When Kane is in the team, Son’s job is to combine with him, which over the last couple of seasons he has done to devastating effect. When he isn’t, Son’s job is to prove Tottenham can function without Harry Kane.

Now Kane wants to leave Tottenham. He may well end up getting strong-armed into staying for another season, but sooner or later he’s going. Son may be a very different sort of forward, but he has all the attributes to step up: a genuine elite player still at his physical peak even at 29, recently tied down for another four years, a Tottenham man to his bones, and one who actually wants to be there.

Most intriguingly, he averages 0.34 goals per game with Kane in the side, and 0.57 without. A Kane-less Son – in tandem with Lucas Moura and Dele Alli – led Tottenham to the Champions League final in 2019. What might his ceiling be if Tottenham finally laid the Kane era to rest, took the money, reinvested it wisely, and built a new team around Son and his spine-tingling all-round talents, his tireless running and movement? If they started to ask not what Son can do for Tottenham, but what Tottenham can do for Son?

“I’m crossing over the threshold of the grand journey to higher mountains,” Son reflects in the documentary. He’s describing – beautifully – that final great leap separating the merely accomplished players from those on the very highest tier, the tier to which he presumably aspires. He’s talking about being the star, and not just in Korea and N17, but across English football, perhaps even the world. Those are the higher mountains. One day I hope he finds them.