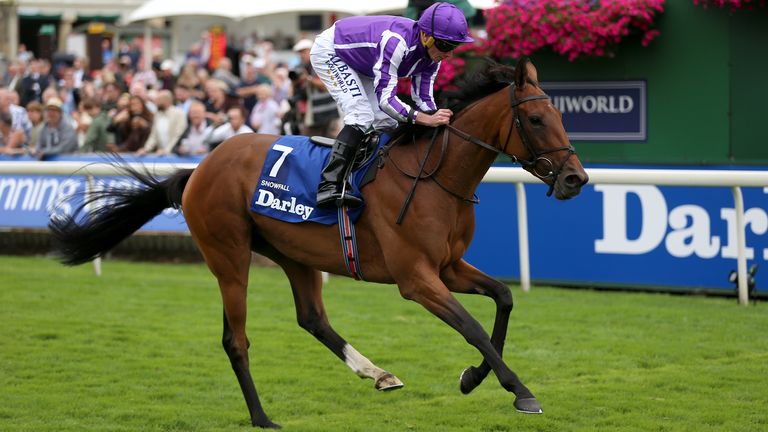 Snowfall gave another brilliant display when adding the Darley Yorkshire Oaks at York to her two Classic victories this summer.

The Aidan O’Brien-trained filly surged away from the opposition in the final two furlongs to land a third Group One after completing the English and Irish Oaks double in spectacular fashion.

The race went to plan for the O’Brien camp through the early stages, with stablemates La Joconde and Divinely occupying the first two places in the early stages and keeping the gallop honest.

Wonderful Tonight, considered the main rival to the 8-15 favourite, tried to stamp her authority on matters but the faster ground was against her and she could not quicken.

Snowfall was going easily and cruised into the lead in the hands of Ryan Moore to seal it in a matter of strides. Albaflora finished well to claim second place, with La Joconde third.

“She quickens very well and now she’s laid back, she’s starting to really thrive and put on weight.

“She’s going to be really ready for the autumn, I think. She travels very well, gets there very easy and then waits.

“We always thought she was good. Last year was a bit of a mess with everything and she was probably rushed a bit too much.

“She did very well over the winter and she’s by Deep Impact out of a Galileo mare, so she’s got a very good pedigree and was always going to get better.”

Snowfall now heads the market for the Prix de l’Arc de Triomphe, and O’Brien added: “I’ll see what the lads want to do, but it’s very possible she could take in another run (before the Arc).

“We’d be very happy to take in another run, I’d imagine. It depends what the lads want to do – whether they want to go to an Arc trial or go straight to the Arc.”