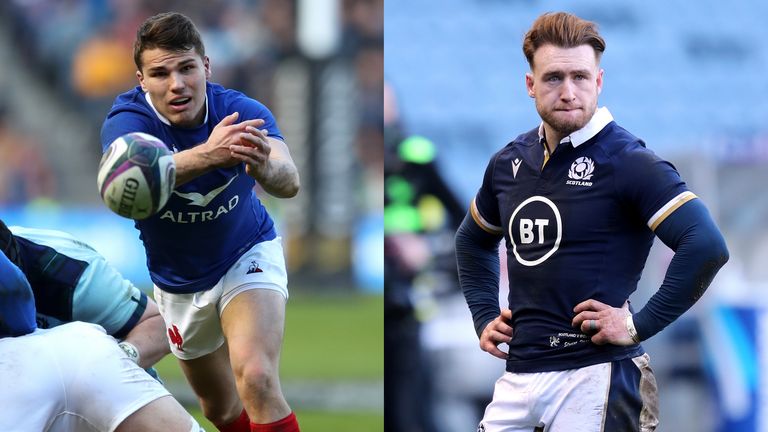 France host Scotland in a Six Nations title decider at the Stade de France on Friday (8pm); talking points include France’s tall order to claim the championship and a focus on performance, Scottish ambitions and defence, as well as selection issues and controversy.

Ahead of France seeking to clinch a first Six Nations title since 2010 vs Scotland in Paris, read through some of the talking points…

‘Focus on the performance’

France have waited 11 years to win the Six Nations, with head coach Fabien Galthie keen for impatience not to get the better of his players in their title decider against Scotland.

France stopped Wales clinching the Grand Slam last week in their dramatic 32-30 victory at the death, keeping alive their own title chances, but, due to points differential, it will take a tall order to lift the cup.

Galthie’s side must beat Scotland with a four-try bonus point and a 21-point margin of victory, or a 20-point victory and six tries. The last time France beat Scotland by such a margin was 2007, when they pipped Ireland to the title late on, but that Scotland side was a shadow of this one.

Despite the challenge they will face, Galthie wants his players to avoid stressing over the mental arithmetic while playing.

“The key is to play well and win, the rest will depend on how the match goes. We shouldn’t lose sight of what we need to do,” Galthie says.

“What’s most important is to focus on our performance and victory, our ability to build a win. But (Scotland) also have their ambitions because if they win by eight points they will finish second, which hasn’t happened to them for a long time.”

Scotland have not placed higher than third in the Six Nations era, since 2000, and so have the chance to seal their best championship finish since they won the last Five Nations in 1999.

Much depends on if Gregor Townsend’s side can keep out the French attack, however, and how they plan to do so.

Wales held out until the 82nd minute last Saturday when they ran out of defenders against a France down to 14 following lock Paul Willemse’s red card.

“They have the best defence in the tournament,” Galthie said of Scotland. “They’re very well organised and disciplined, very tactical and strategic.”

Former France wing Vincent Clerc, who won three Six Nations titles including in 2010, urges the current side to stay patient despite its abundance of attacking potential.

“If you go for lots of tries early on then you might get frustrated if you don’t get them,” he told L’Equipe. “You must tell yourself that it’s no big deal if you’re only ahead by three points at half-time.”

Last year, Scotland spoiled France’s Grand Slam chances and ultimately their championship hopes at Murrayfield with a gritty 28-17 win after Mohamed Haouas’ red card. They haven’t won in Paris for some 22 years though.

“As a group, we have faced several challenges throughout this Six Nations, it has brought us closer together, Townsend said. “I know the players are motivated and looking forward to representing their country again on Friday night.”

This Round 3 Six Nations Test was originally scheduled for February 28, but had to be postponed due to a Covid-19 outbreak within the France ranks.

With the Test now outside the international window, Scotland were told they could only select five players from English clubs, and so back-three Sean Maitland (Saracens) and prop Jamie Bhatti (Bath) controversially miss out.

“The main thing for us is we put squad first,” Scotland captain Hogg said. “We could see how much it meant to Sean Maitland that he wasn’t going to be included. That hurt him a lot.

“The other boys, Duncan Taylor, Jamie Bhatti, these are guys who have had a massive impact on what we’ve done in training these last few weeks.

“For us, we’re going out to put in a performance they’ll be proud of. They’ve put massive efforts into this. That means it’s not just the 23 but the guys we call the Renegades, the guys who help the team prepare. They’ve been a massive part of it as well as those on the field. Tomorrow we’re going to go out there for everyone.

“We’ll put the squad first, get the job done tomorrow and play for these boys. My opinion is one I’ll keep to myself on this because I don’t want it to be headline news when there’s other things to concentrate on.”

For France, Galthie has shaken things up with five changes – two of them enforced.

Romain Ntamack is at fly-half in place of Matthieu Jalibert, who injured his jaw against Wales. Ntamack, one of France’s best players last year and at the 2019 Rugby World Cup, has made a timely return from his own double jaw fracture in December to feature again.

Galthie had changed both lock forwards, with the suspended Willemse replaced Bernard Le Roux and Swan Rebbadj in for the benched Romain Taofifenua.