Saints cut loose in second half to thump Wakefield 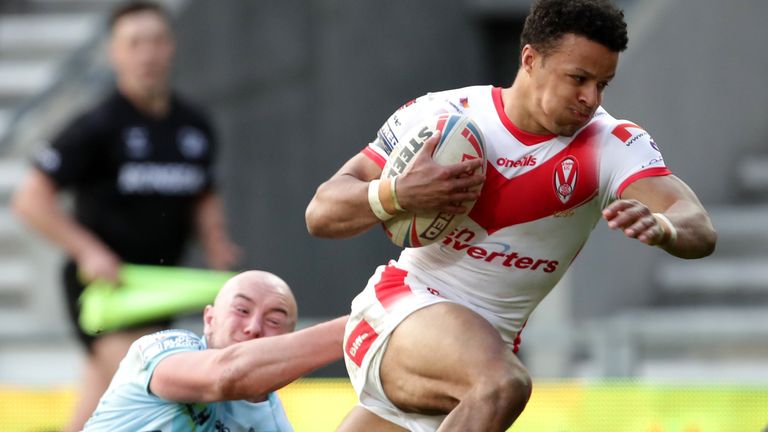 St Helens score six second-half tries to maintain their 100 per cent start to the season; Kevin Naiqama and Regan Grace both score with James Bentley and Jack Welsby also touching down for the Super League champions

St Helens overcame their first-half lethargy to maintain their unbeaten start to their Super League title defence with a resounding 34-6 win over Wakefield.

The champions were strangely out of sorts in the first half, which ended pointless, but found a purple patch early in the third quarter and eventually ran in six tries to make it three wins out of three and leave Trinity still looking for their first win of 2021.

Wakefield were without seven players through injury but, on a third successive visit to the Totally Wicked Stadium, looked quite at home in the first half.

The Saints attack was unrecognisable throughout the first 40 minutes with half-backs Jonny Lomax and Theo Fages lacking creativity and full-back Lachlan Coote unable to add his customary spark.

Trinity were more purposeful and dominated field position but were short of a cutting edge, which became more pronounced when stand-off and captain Jacob Miller limped off after 18 minutes.

In rare meaningful attacks, Saints second rower Joel Thompson was held up over the line and winger Tommy Makinson put a foot in touch after being freed by Naiqama while second rower James Batchelor went closest for the visitors as he claimed Mason Lino’s kick to the line but was brought down inches short.

Wakefield turned down a penalty kick for goal in front of the posts in an effort to take advantage of the 17th-minute sin-binning of Saints second rower James Bentley for dissent but they could not crack their 12-man opponents.

Naiqama opened the scoring within two minutes of the restart, bundling his way past Joe Arundel to touch down at the corner, and four minutes later Bentley finished off a break by Fages, wrong-footing full-back Ryan Hampshire to score a delightful try.

Makinson kicked both conversions and substitute props Louie McCarthy-Scarsbrook, on the 400th appearance of his career, and ex-Wakefield man Kyle Amor were both held up over the line as Saints maintained the pressure.

It told on 52 minutes when Lomax threaded a kick to the line and Welsby won the race to touch down for his side’s third try in 11 minutes.

Wakefield briefly stemmed the flow of points but they were undone again on 62 minutes when they failed to clear the danger posed by Welsby’s grubber kick and Grace pounced for Saints’ fourth try, with Makinson’s second touchline conversion making it 24-0.

Trinity were a dispirited team by then and the punishment continued as Naiqama showed a nice turn of speed to score his second try and Grace finished off a superb break by Welsby to grab his second.

With Makinson off the field, substitute Lewis Dodd took on the goalkicking duties and, after hitting the post with his first attempt, he converted his side’s sixth try to make it 34-0.

Wakefield finished a badly-beaten team but they scored a consolation try through second rower Jay Pitts, which was goaled by Lino.