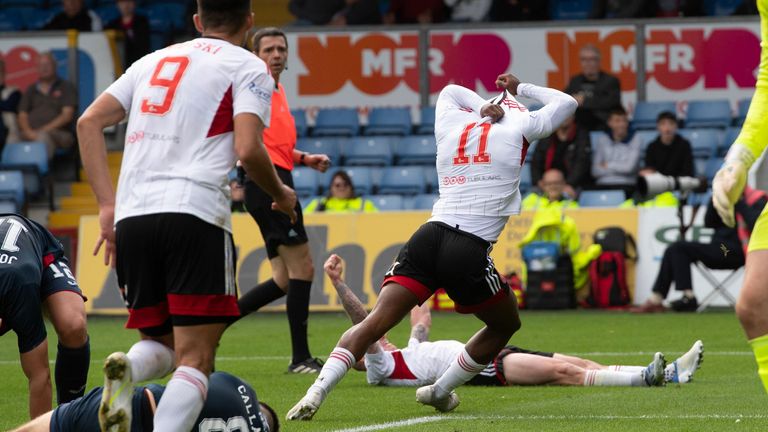 Ross County salvaged a last-gasp 1-1 draw against Aberdeen in the Scottish Premiership.

Chances were hard to come by in Dingwall, so much so that when Luis Lopes scored in the 88th minute it seemed like the points would be heading to Pittodrie.

However, William Akio marked his return from injury by scoring with the last kick of the game to ensure the Staggies would be able to take something from the match.

The visitors started on the front foot, with Jonny Hayes testing Ross Laidlaw in the opening minutes with a strike from distance.

County’s ‘keeper was called into action again when Leighton Clarkson made an interception inside his own half and gave the ball to Vicente Besuijen, who ran the length of the Staggies half to test Laidlaw, but found his angle too narrow to net.

Although the Dons dominated possession and territory in the first 45 minutes, neither goalkeeper had too much to do for the rest of the half.

Malky Mackay made two substitutions at the interval, looking to inject some pace and width to his side, but the second half continued in much the same way the first had panned out.

Aberdeen again had more of the ball but the Dons’ final ball let them down, as when they got in a position to cross into dangerous areas they were wayward more often than not.

County, too, were never able to create a clear-cut opening to test out Kelle Roos, with the visiting defence doing enough to keep them away from goal, meaning a draw looked inevitable going into the closing stages.

However, Matty Kennedy showed a burst of energy after being sent on by Jim Goodwin to force a save out of Laidlaw, and with less than five minutes to go the Dons took the lead.

Kennedy again drove his side forward, this time playing in Hayes who managed to force the ball to Lopes in the middle.

Lopes, affectionately known as Duk, managed to acrobatically finish past Laidlaw from around eight yards out, but there would be one final twist in the tale.

In the dying seconds of the match, County sent the ball into the penalty area where a scramble ensued, and Akio turned the ball in to save a point for his side.

Mackay: Clarkson’s challenge was a leg-breaker

The Staggies boss felt it should have been a sending off, and after two of his players were shown retrospective red cards against Kilmarnock he is looking for consistency now.

“I’ve watched it back and, for me, the tackle was a leg-breaker,” Mackay said. “I’ve spoken to the referee to let him know that I will be looking to see what the compliance officer does.

“We’ve come off the back of a couple of difficult weeks in the compliance side of the game, with our two players who were cited and retrospectively sent off. Then at Ibrox, we had a decision not to have had a man (James Sands) sent off against us.

“Today there’s another one that’s glaring. I’m just looking for consistency. Unless the compliance officer gets someone to sit down and watch all six games, all 90 minutes, on a Sunday evening then I don’t see how people can be cited because things are missed and it can’t just be on Saturday and Sunday night TV programmes.

“The referee was good but that was a really poor challenge and if they had gone to 10 men after 56 minutes, it would have changed the dynamic of the game.

Aberdeen boss Jim Goodwin, meanwhile, was left disappointed that his side could not hold on for victory after taking the lead so late on.

“I was thinking it was job done and to lose a goal in the last 30 seconds makes it tougher,” he said.

“We don’t go away from home thinking it will be easy, but when you score so late [a draw] feels like a defeat. We got a point but we should have had another two.

“One of our boys misses his clearance which is unfortunate. Jayden Richardson is in a good position but his foot slipped as he was about to push off to make the clearance.

“It was a catalogue of errors for the goal – scruffy and avoidable.”

Up next for Ross County is a home match against Motherwell in the Scottish Premiership next Saturday (kick-off 3pm).