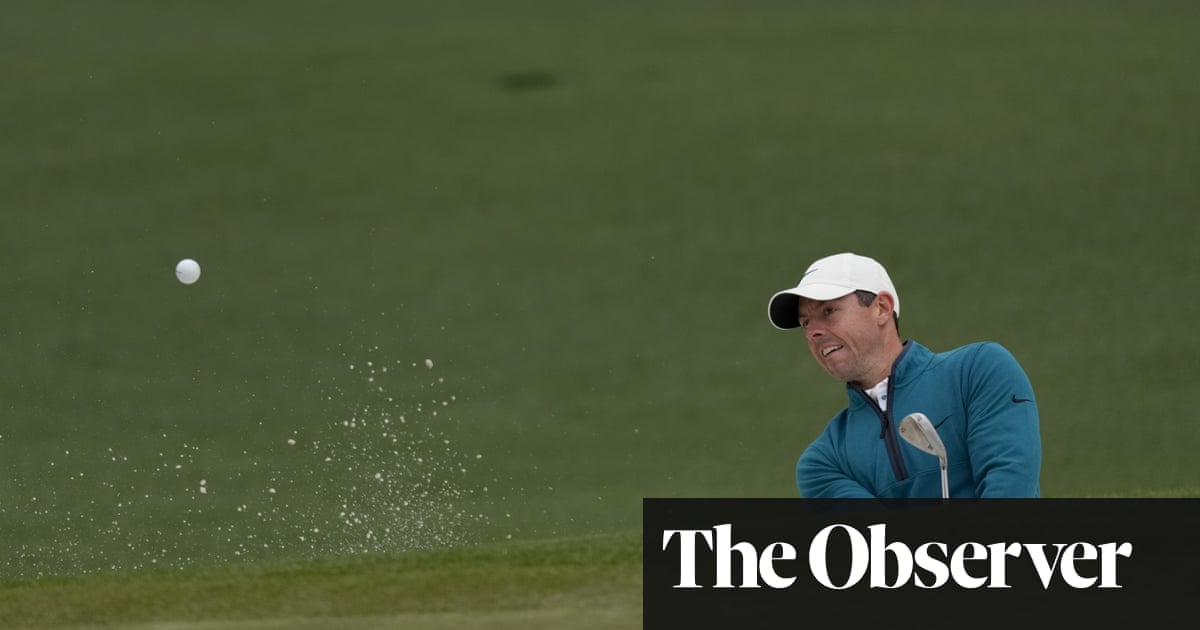 “I feel like I’m right there,” said Rory McIlroy on Friday night, as he weighed his chances after back‑to‑back rounds of 73 on Thursday and Friday. “You go out tomorrow and you play a decent front nine, and all of a sudden you’re right in the thick of things.” Seventeen hours later, he stepped out on to the 1st tee and, thwack, dumped his opening drive right into a fairway bunker, then, crack, whacked his second shot into the lip where it rebounded and fell back down by his feet. His third made it on to the green, where he took two putts from 20ft. So McIlroy started his charge to the top by dropping a shot.

From there, it was off to long downhill dog-leg 2nd, which has been the easiest hole on the course this week. The field have made more than a hundred birdies there. Just the place to get that run up the leaderboard going, then. This time there was a long, loud cry of “Right!” as McIlroy’s drive whizzed overhead into the gallery, after that he fizzed his second into the front bunker, and scrambled his way out in even par. On to the stiff uphill 3rd then, a trickier proposition this, but McIlroy earned a birdie chance with a brilliant approach that landed 7ft from the pin. Then he missed the putt. Oh, Rory.

Who ever hoped harder than a McIlroy fan in Masters week? And who ever suffered more for their faith? After 14 years of watching this sort of carry on, a lot of the locals have given up backing him to win. He still draws a large gallery, and has a lot of support, but it feels tinged with sympathy. A lot of them moved on from anticipation through frustration to lower expectations. And then he goes and makes a putt like the one he rolled in from 37ft for a birdie on the 4th, and you are reminded why Gary Player said on Thursday: “He is, basically the most talented player I’ve seen in ages.”

Those two holes, the missed putt from 7ft at the 3rd, and the made putt from 37ft at the 4th, about summed the round up. It was all one step forward and one step back again. At the 6th, he missed a par putt from 6ft after he had chipped on to the green, then at the 7th, minutes later, he made a birdie putt coming back from three times the distance. He makes some shots no one could, then misses some no one should. At the 10th, which he usually has such trouble with, he hit a glorious approach shot to 8ft and just when you were wondering if he was going to go on a run round the back nine, he missed the birdie putt.

The overall impression was of a man trying to start a fire with a flint and a few damp sticks. There were a lot of sparks but it never caught light.

At the 12th, McIlroy’s tee shot was over the back on to the bank, and he needed three putts to finish it from there. So that was another dropped shot. And then at the 13th, inevitably, he hit his second to within inches of the pin and nearly picked up an eagle. There was another birdie at the 15th, the other par-five on the back nine, which put him under par for the round for the first time. He stayed there, one under for the day, one over for the tournament.

McIlroy’s Sunday record at Augusta is so good (he is a total of 21 under par here in the eight Sunday rounds he has played since 2012, with six rounds in the 60s) that in the right circumstances that score would still leave him a swinger’s chance at winning the thing. In fact his whole strategy this week has been based around putting himself in position to do exactly that. He’s been trying to play the kind of slow, steady and sensible golf that would ensure he is in contention come the back nine on Sunday. But not this year, when the lead is well out of reach whatever he scores.

He admitted as much himself. His new plan for Sunday is “to go out and shoot the best score that you possibly can without being reckless and without taking on too much risk. I’ll try to go out and do that tomorrow. I think I moved up a few places with that score today, and I’ll just try to move up a few more tomorrow and try to get a top ten and move on.”

His Sunday record is so good here it wouldn’t be a surprise if he did it, too. It would be his seventh top‑10 finish in the last nine years if he does.

So it’s another chance gone. The “boring” Rory strategy didn’t work out much better for him than any of the other approaches he’s used while he has been trying to finish off his grand slam. You wonder what he will come up with this time next April. By then, of course, the dreaming will start all over again. If he could only make one or two more of those putts he missed, if he could just play a couple more holes the way he did 4th, or the 7th then … and that’s what gets you back to hoping.