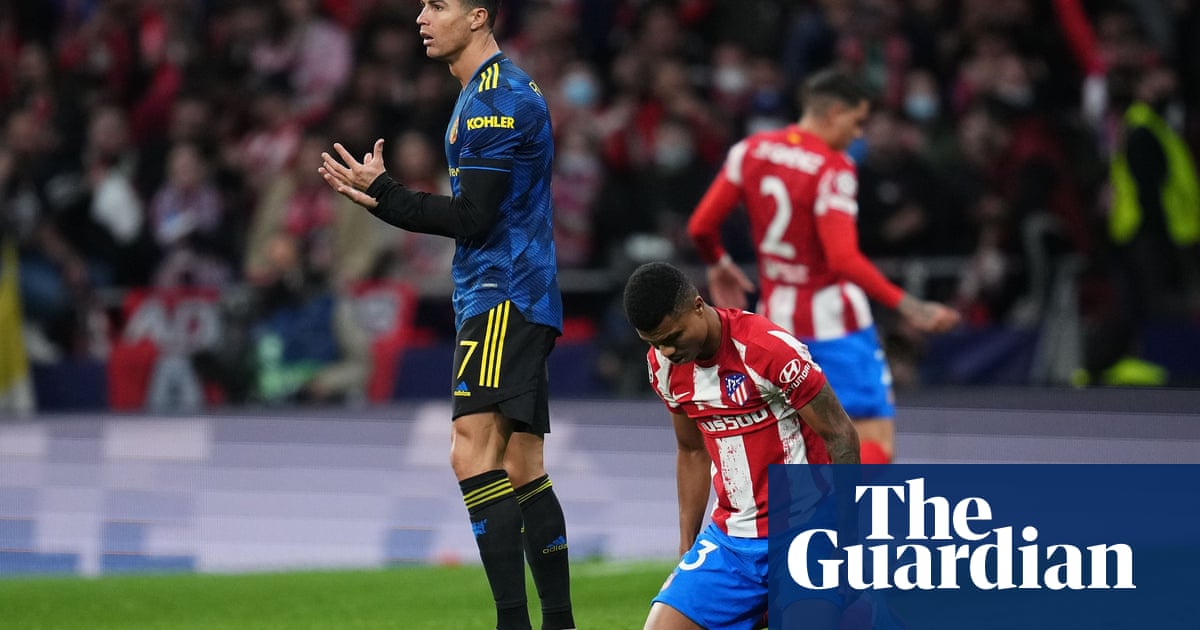 There was a moment just before half-time at the Wanda Metropolitano when Cristiano Ronaldo stood on the penalty spot, delivered a shrug of the shoulders, pulled a face and raised a finger: one, just one. None of his Manchester United teammates were really looking his way and even if they had been, there was little they could do about it, and so he walked slowly back out of the area, shaking his head, alone. It was a journey he would embark upon often.

All the way to the end, in fact, when he was the first player off, throwing back his arm in frustration, born perhaps not just of this night but other nights too, an uncomfortably familiar feeling of impotence, a hint of recrimination there too. Pausing to applaud the fans in the north stand, Ronaldo crossed the pitch and turned up the tunnel on his own. United had found a way through, Anthony Elanga slipping past Jan Oblak with 10 minutes to go, but the goal he wanted never came on his return to the city where he won it all.

At least defeat was not delivered either, he and his team handed the chance to fight another day. As he had walked away from the penalty spot, Ronaldo had watched Atlético escape up the left, Renan Lodi delivering another superb ball across the Manchester United box. At the far post, Sime Vrsaljko headed it off the face of Victor Lindelöf and it bounced down and up off the bar. It was almost comical, and they had got away with it. It was becoming that kind of game.

Ronaldo was the last one off at the break. He was having words with the referee then and would surely be having words with his teammates next. Atlético led by a goal, and for United that was the good news. It wasn’t so much that they had been overrun, although they had, as that at times it was as if they had put their legs on the wrong way around, the ball given away easily and often, simple tasks unfulfilled.

Fred had been extremely fortunate to get away with one, somehow getting a free-kick when he had been the offender as Geoffrey Kondogbia was running through. Ángel Correa almost caught Raphaël Varane, the former Real Madrid player completing only half of his passes. Even goal-kicks were a problem, the ball gifted inside the area. United put together a half-decent move on the hour, Ronaldo at the heart of it. When Marcus Rashford smashed a long way over from a long way out, it summed things up. This really wasn’t very good.

Ronaldo had watched too much of it from a distance, at one point waving his teammates forward. He has put many clubs to the sword but he has hurt Atlético almost more than any other team. A goal in the 2014 Champions League final. The winning penalty two years later. A hat-trick in the semi-final two years after that. And two years after that – the last time he faced them – he scored another hat‑trick to knock them out. He has scored against them 25 times.

Twenty-five times it would stay. Ronaldo had been whistled when the teams were read out and was whistled every time he got the ball, which spoke of many emotions, fear among them, although that gradually faded. In the sports newspaper AS, this had been declared a Cock Fight between him and João Félix. It was the other Portuguese, 15 years his junior, who would light up the occasion, scoring with a superb diving header to give Atlético an early lead. He was withdrawn to an ovation with 15 minutes to go.

Ronaldo had pulled up with cramp – he lasted longer but could not change this game. More than moments, there were gestures, gesticulaton, although he might have got his moment at the end. A late free-kick, generously awarded, brought that familiar routine: six steps back, two steps to the side, a deep breath. This seemed set up, the story about to write itself, but the ball sailed over. It was done.

With 30 seconds remaining Ronaldo went down in the right corner, no foul given, left sitting there, arms outstretched. He got up, and stood by Jan Oblak as the goalkeeper booted the last of many long balls up the pitch to no one in particular. And then he walked out of there. Ronaldo had demanded one, just one. He didn’t get it, but at least United did.

Last time he was here, Ronaldo had left the stadium raising four fingers as he went past the press. He had won four Champions Leagues to their none, he reminded them, as if they needed telling. He hadn’t enjoyed that night either, unable to score here, but he had scored three in the return leg. No, that doesn’t seem likely now – one would do.