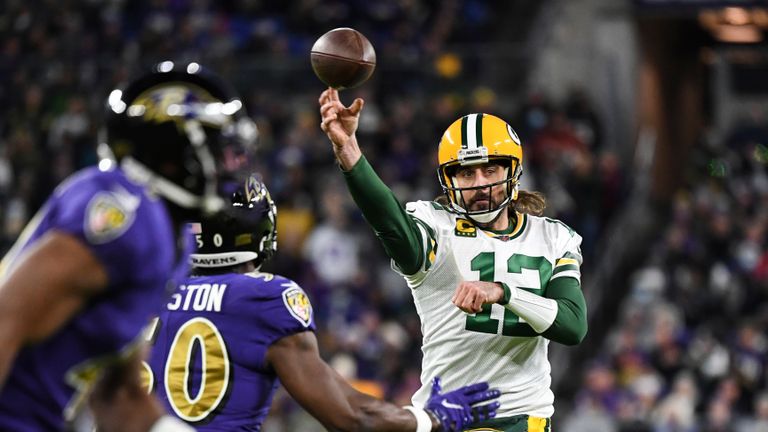 Baltimore backup quarterback Tyler Huntley threw for 215 yards and two touchdowns, as well as rushing for 73 yards, with two fourth-quarter scores giving the Ravens the chance to win the game on a two-point conversion attempt in the final minute, only for his throw to fall incomplete Aaron Rodgers threw three touchdown passes to equal Brett Favre’s’ franchise record of 442 as the Green Bay Packers held on to beat the Baltimore Ravens 31-30 in a thrilling Week 15 clash.

The Packers, who led by two scores, 31-17, inside the final 10 minutes of the game, were made to sweat as Baltimore backup quarterback Tyler Huntley – starting in place of the injured Lamar Jackson – ran in two touchdowns.

Huntley’s second, an eight-yard score, came with 42 seconds left but, rather than attempt the extra point to tie the game and maybe take it to overtime, the Ravens went for a potential game-winning two-point try and failed for the second time in three weeks.

Just like in their Week 13 loss to the Pittsburgh Steelers, tight end Mark Andrews was the target, but Huntley’s pass fell incomplete. It was an otherwise hugely impressive performance from the Baltimore backup, however, as he tossed two touchdowns in a 215-yard passing effort and rushed for 73 yards on 13 carries, including those two fourth-quarter scores.

Rodgers was lights out too, throwing for 268 yards and three touchdowns, though he couldn’t quite find that record-breaking fourth – he had the chance to when the Ravens turned the ball over on downs inside their one half early in the fourth quarter, but the Packers ultimately had to settle for a Mason Crosby field goal that put them up 31-17. With victory, Green Bay (11-3) keep a firm grip on the No 1 seed in the NFC for at least another week, while a third-straight defeat for Baltimore (8-6) means they are leapfrogged by the Cincinnati Bengals (8-6) for the AFC North division lead and are now outside of the playoff picture with three games to play.

Foreshadowing their late, gutsy call to go for a game-winning two-point conversion, the Ravens were aggressive on offense from the outset. On a 14-play opening drive, Baltimore opted to go for it on 4th-and-Goal from the three-yard line, only for Huntley to be sacked and to turn the ball over on downs.

The Ravens would take the lead, however, not long after as Huntley found Andrews for the first of two first-half touchdowns in a 10-catch, 136-yard night for their star tight end.

Green Bay answered the call on each occasion, with A.J. Dillon first finding the endzone on a two-yard run and then Rodgers finding his favourite target, Davante Adams, with a three-yard TD toss to tie the game up a 14 apiece.

That’s how it would stay heading into the break, but after the interval the Packers began to streak clear of their hosts at M&T Bank Stadium, with Rodgers combining first with Aaron Jones and then Marquez Valdes-Scantling for touchdowns on both of their opening possessions of the second half – either side of a Baltimore field goal.

Rodgers’ scoring strike to Valdes-Scantling was the 442nd of his Packers career, tying Hall of Famer Favre’s franchise-record mark. He’d have an opportunity to break it just three minutes later, but the quarterback uncharacteristically missed a wide-open Allen Lazard in the right corner of the endzone on 3rd-and-Goal.

The Packers settled for a 29-yard Crosby field goal to put them 31-17 up with nine minutes and 30 seconds left to play, only for the Ravens offense to suddenly spark into life once more, Huntley leading the way.

He first capped a 75-yard drive with a three-yard rushing score to cut the deficit to seven with just under five minutes to go and then, after Green Bay went three-and-out on offense, he found the endzone again to give Baltimore the chance to win it late only for them to come up short.

The Packers (11-3) are in action on Christmas Day, playing host in Green Bay to another AFC North outfit in the Cleveland Browns (7-6).

As well as no doubt having an eye on the action in Wisconsin, the Ravens (8-6) have a massive Boxing Day matchup against the now division-leading Bengals (8-6) in Cincinnati.