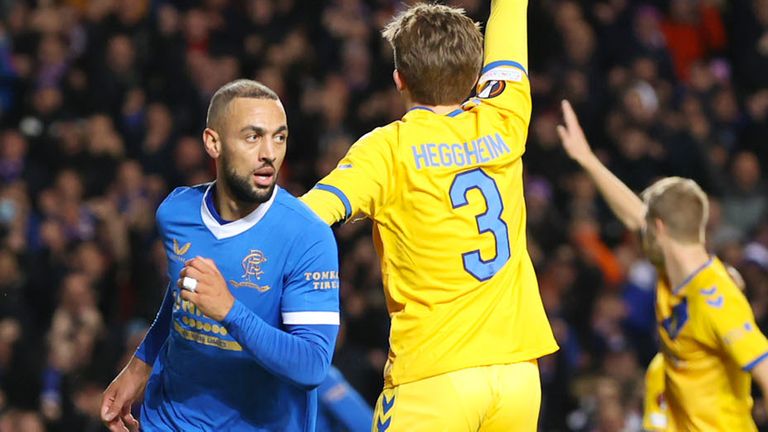 First-half goals from Leon Balogun and Kemar Roofe saw Rangers beat Brondby 2-0 at Ibrox to keep alive their hopes of progressing to the knockout stages of the Europa League.

Rangers had lost their opening two Group A matches, making this a vital clash for Steven Gerrard’s side, who made the perfect start when Balogun’s powerful header gave them an 18th-minute lead.

Things got even better on the half-hour mark when Roofe tapped home after Alfredo Morelos’ close-range header had been saved, although Rangers needed the intervention of the Video Assistant Referee to confirm that goal after it had initially been ruled out by the referee’s assistant.

As a result, Rangers have moved up to third in the group at the halfway stage, a point behind Sparta Prague in second ahead of their return meeting at Brondby on November 4.

Man of the match: Joe Aribo

Gerrard had labelled this a must-win encounter and that is exactly what his team did after a thoroughly professional display at Ibrox that keeps alive their hopes of playing European football in the second half of the season.

It helped that the home team went ahead early on when Balogun escaped his marker to meet James Tavernier’s inviting corner from the right, taken by the Rangers captain despite being showered with objects thrown by the visiting Brondby fans situated in that part of the ground.

Tavernier had the last laugh, though, as Balogun’s thumping header could not be kept out by Thomas Mikkelsen, despite the Brondby goalkeeper getting strong hands to the ball, and soon Rangers had doubled their lead.

Rangers boss Steven Gerrard made two changes from the team that drew 1-1 with Hearts on Saturday.

The outstanding Joe Aribo got free down the right, before crossing, and despite Mikkelsen doing brilliantly to keep out Morelos’ close-range header, there was Roofe sniffing around in the right place, at the right time, to tuck home the rebound.

Initially, the goal was ruled out for offside, however, after a lengthy delay the VAR spotted the striker was in fact level with the last Brondby defender, much to the Rangers fans’ delight.

That gave the hosts some much-needed breathing space, which would have been even greater had Morelos’ clever effort struck the inside, rather than the outside, of the post just before half-time.

There were scares along the way, with Brondby striker and top-scorer Mikael Uhre wasting a glorious chance to pull a goal back right at the start of the second period, only to miss the target with just Allan McGregor to beat.

Rangers, however, also had opportunities to score more goals, but this time the VAR ruled against them after man of the match Aribo had seemingly been felled in the box, while Scott Arfield also hit the bar late on after being set up by fellow substitute Scott Wright

Not that Gerrard was too concerned, with Rangers still alive in Europe.

Rangers finally back to winnings ways in Europe – Opta stats

48 – Since Steven Gerrard’s first game in charge of @RangersFC in July 2018, James Tavernier has provided 48 assists across all competitions for the club, at least 20 more than any other player. Pinpoint. pic.twitter.com/G55zMyM8iy

1 – Leon Balogun has scored his first ever @RangersFC goal. It’s his first goal in any club competition since netting for Brighton against Crystal Palace in the Premier League back in December 2018. Rise. pic.twitter.com/DJdKNkYDlD

Rangers travel to St Mirren in the Scottish Premiership on Sunday, with the game getting under way at 12pm on Sky Sports Football.