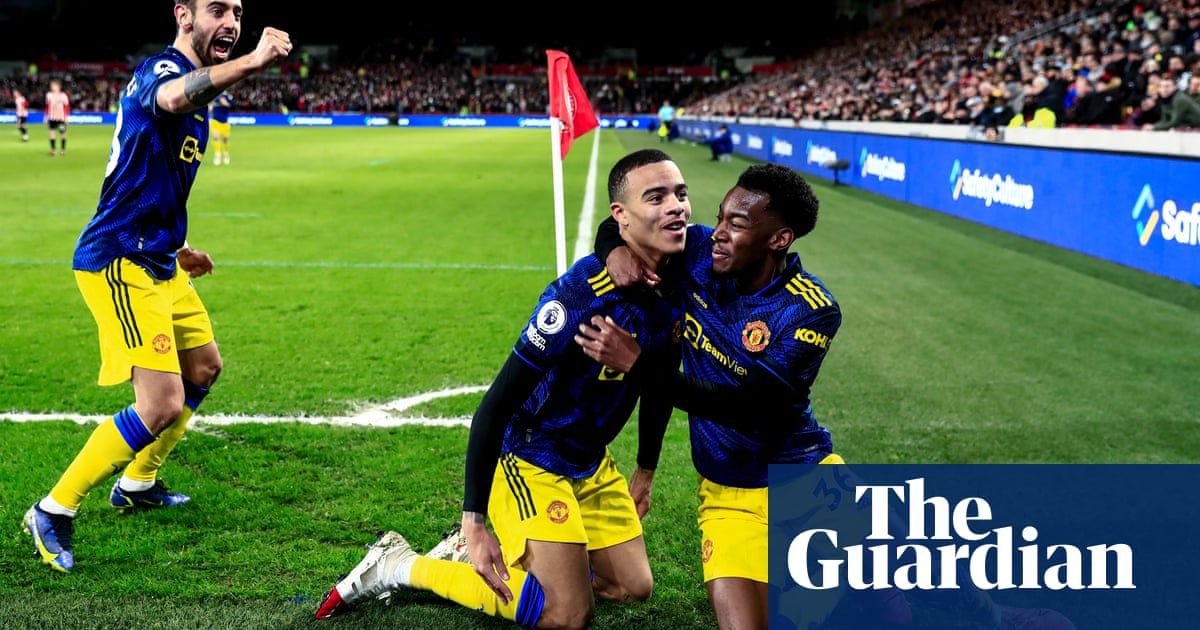 With 62 minutes gone at the Brentford Community Stadium something startling happened.

Ralf Rangnick’s Manchester United – this collection of jumbled limbs, soldered and bolted together on its gurney – sprung unexpectedly to its feet, arms raised towards the light.

United were already 1-0 up at the time. The first half had belonged to Brentford, United producing periods of slow possession interspersed with spasms of intensity where the players seemed to be trying to execute the Rangnick press and pass, but dished up instead a flurry of disconnected energy, like a pigeon trapped in the eaves.

At which point the players in custard yellow shorts produced the single most Ralf Rangnick moment of this temp-to-perm Ralf Rangnick reign. It was a lovely goal, and best of all it came straight from the playbook of swift turnovers and direct running.

Scott McTominay won the ball in United’s half and played an instant forward pass. Cristiano Ronaldo conjured a swivelling chest-nudge into the run of Bruno Fernandes, haring straight at goal, with only green in front of him.

To his right Mason Greenwood was already veering inside the cover to take Fernandes’ pass and finish before sprinting off to the away section: the end point of a move that took four seconds and three passes to travel 60 metres, finished by two players sprinting side by side like the medallists in the world indoor 60m championship.

In that moment it did feel like a flicker of something. What does Rangnick want? He wants youth, energy and constant running. He hates complacency, resistance to change, the feeling of being stuck. Welcome, Ralf, to the museum of the recent past, haunted by ghosts, glories, brand-power. And true to form the week had been dominated by a new theme, the idea of dressing room rot, of a culture gone bad, sickly, fish-grey, curdled.

Wanting it. Having it. Desire. Hunger. Are we really here, back at the atomic level, down in the mud of basic human stuff, like, do you actually want to do this at all?

It is probably unfair to question the basic motivation of these players. What we saw in the opening half-hour here was an inability to execute the plan. Coaching is a strange thing. It’s no use just telling people what you want them to do. Express yourself. Play without fear. Press hard. OK, fine. But how? This is of course Rangnick’s job, and until now it has been a fuzzy connection.

Rangnick has talked a lot about “second balls” since he got to England, a strange kind of localised obsession. Do we really want Rangnick to be doing this?

We have a hundred English blokes in reserve who can talk about second balls. Shouldn’t he be talking about rotational pressing and third phase possession? But he was right. United didn’t win the second balls, or the first balls, or indeed the third balls early on. Brentford won those duels and might have scored three times with competent finishing. But then, it has been five years now since Thomas Frank turned up in west London, five years of goggle-eyed, weirdly magnetic pass and press energy. This team is in many ways a version of that latest United blueprint.

Rangnick fielded a side with an eye on this evolving vision, with a few faces starting to settle and a 19-, 20- and 22-year-old in the starting 11. But early on United were oddly error-prone, strung together in tight rows, but always out of step, like a group of men learning to line dance, turning the wrong way, treading on toes, falling over barstools.

The second half brought an abrupt change of tempo, as United came out cranked, revved and ready to go. The first goal came from a moment of fast-forward brilliance from Fred. Taking the ball from Diogo Dalot, he looked up, registered Anthony Elanga’s diagonal run in the edge of his vision and produced an instant clipped pass to intersect with his trajectory. Elanga had time to take a sightly heavy touch, adjust his feet and nod the ball past Jonas Lössl, who seemed surprised in that moment, to look up and find himself keeping goal in a football match.

The third goal was another moment of Total Ralf, as McTominay won the ball again, fed it forward again and a swift move ended with Marcus Rashford finishing well. This was another excellent 90 minutes from McTominay, who in this Rangnick version of 4–3-3 is asked to play close together with Fred in a kind of twin-headed midfield ogre, strangling the space, always feeding the ball forward.

Rangnick loves players who carry out a plan, who have no ego, who enjoy those collisions, and McTominay is well suited to this. Get it. Go forwards. Snap those passes out. Rangnick could be good for him. And for all the muddle, the luck, the poor Brentford finishing, there was at least a flicker here, a glimpse of that alternative, Ralf-shaped universe.