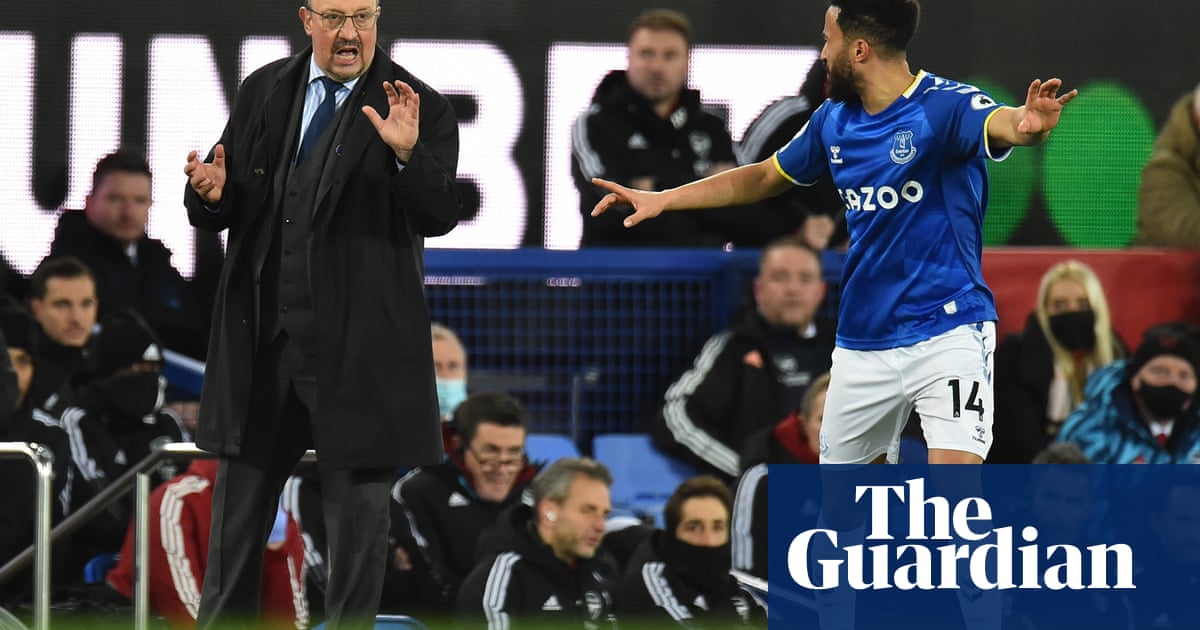 Perhaps it was the first protest to be delayed because Richarlison won a corner. Militancy was put on hold for 30 seconds or so until it came to nothing. And then the stream to the exits began. Not all Evertonians, not a majority, but enough to leave the Gwladys Street End and the Park Stand looked more deserted than usual. While the cynics wondered if, as thousands remained seated, Everton could not even stage a convincing mutiny, this was a movement with a difference.

It was a cry for competence. Everton have had a surfeit of ambition and a shortage of good judgment in the Farhad Moshiri era. The fans’ #27minutesfor27years campaign references their trophy drought. Technically, it is only 26, but it displays precious little confidence Séamus Coleman will lift the FA Cup in May. “Time’s Up, Bill,” read a banner. Chairman Bill Kenwright was the target but more discord stems from Moshiri’s decision-making.

Yet after the dissidents reclaimed their spots, they ended in ebullient mood, thanks in part to Moshiri’s most controversial choice: Rafael Benítez. As Everton’s longest winless run since 1994 came to a dramatic end, it was a triumph for their unwanted, unloved manager. The manager illustrated he can be the architect of comebacks for both Merseyside clubs. Sixteen years after Istanbul, he could still reinvent a limited team mid-match.

His options felt unappealing. The right winger Andros Townsend started as a striker. Anthony Gordon played because he isn’t Alex Iwobi. Everton looked short of ideas, but Benítez showed his resourcefulness. The shift in momentum came from his tactical switch, from 4-4-2 to 4-3-3. The incision came from his talismanic recruit. Benítez has spent just 0.3% of Everton’s transfer outlay under Moshiri, but Demarai Gray was a £1.7m bargain even before he rattled the crossbar with a ferocious shot, Richarlison heading in the rebound for the equaliser, and also bent in the winner.

Until Gray’s intervention, Benítez had appeared luckless: Yerry Mina, returning after two months out, limped off after half an hour, Richarlison had two goals disallowed and the 61-year-old was the favourite in the sack race. Instead, he conjured his finest victory in charge of Everton.

Benítez lingered on the pitch afterwards, savouring not adulation, but perhaps acceptance. His name has been sung at Goodison only by crowing Liverpool supporters in their biggest win here since 1982 but the lone resident of the Wirral to be booed was the pantomime villain, Mike Dean.

Meanwhile, there was no sign of Moshiri, who was expected at Goodison. Instead, the billionaire’s was another chair that was unoccupied, and not merely for part of the first half. Kenwright had less company in the directors’ box. Minus the sacked director of football, Marcel Brands, perhaps there was an empty seat in place of an empty suit.

Below him, Benítez surveyed passages of nothingness while dressed like an undertaker. There has been little mourning as Everton careers have ended recently: James Rodríguez, Carlo Ancelotti’s flagship signing, and Brands, the supposed powerbroker who did not appoint Benítez. The Spaniard has outlasted both; perhaps he outmanoeuvred them too. Such survival instincts may be testament to his skills at backroom politicking. If he was framed as the winner of a power struggle, he ended up the winner of the match.

Benítez had stood with his hands behind his back. Metaphorically, they have been tied there by Everton’s past errors. He named a bench populated by bad signings: Fabian Delph, Iwobi, Cenk Tosun, André Gomes and Jean-Philippe Gbamin account for around £100m of the half a billion pounds spent on players in Moshiri’s reign. It is an exaggeration to say that getting £28m for Iwobi is Arsenal’s greatest moment since Arsène Wenger left, but maybe not by much. He ranks as one of Moshiri’s most expensive mistakes. Perhaps it took a man of Benítez’s stubbornness to believe his past would not render him another blunder but, from the depths of despair, his side roused Goodison.

“Football is about crisis one day and glory the next,” Moshiri said last week. Five years at Goodison really ought to have rid him of that notion. At Everton, the chastening failures have outnumbered the wonderful triumphs under his ownership. But, if only for one night, they plucked glory from the jaws of crisis, aided by managerial competence.