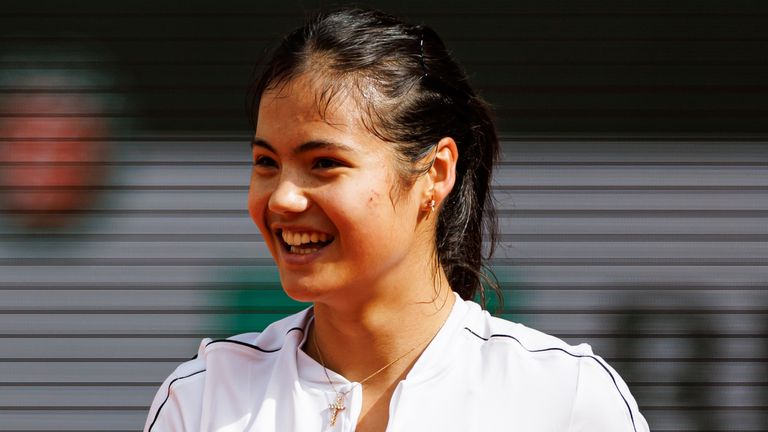 US Open winner Emma Raducanu takes on French Open junior champion Linda Noskova in the opening round of the tournament at Roland Garros on Monday; fellow Brits Cameron Norrie, Heather Watson, Dan Evans and Harriet Dart are also in action

Emma Raducanu leads the British contingent as the US Open champion makes her main draw Roland Garros debut on Monday.

The US Open champion opens her campaign against 17-year-old Linda Noskova – the third match on Court Simonne-Mathieu not before 2.30pm (BST).

Noskova is last year’s French Open girls champion and the latest in a long production line of players coming out of the Czech Republic.

Raducanu, 19, has declaring herself fit, despite concerns over a back problem and she appeared relaxed as she practised with LTA coach Louis Cayer by her side on Sunday.

The 12th seed arrives in Paris having split with German coach Torben Beltz last month, leaving her searching for a fourth coach in the space of a year after spells with Nigel Sears at Wimbledon and Andrew Richardson at Flushing Meadows.

Speaking ahead of her debut on clay playing for Great Britain at the Billie Jean King Cup play-off against the Czech Republic last month, Raducanu cited her belief that it could be one of her best surfaces.

Her mantra remains very much one of needing time, patience and some tinkering with her game.

“I think that something the clay has taught is how to experiment, play with the ball and the court dimensions,” she said. “I think the dropshot is a pretty good shot to use in the game. Especially on clay where people might sit back a little bit.

“I don’t particularly see myself as a dropshotter, chipper thing. I just think that what I’m doing is more me experimenting and having fun.”

Raducanu heads into her opening match having played a total of nine matches on clay in the past month and she feels she has adapted to the surface much faster than she thought.

“I have definitely learnt about how to stay in the point. I think my movement on defence has also improved a bit. Just when to play with spin and when to actually hit it hard,” she said.

“You don’t have to always just grind it out. Sometimes you can put your hard court game on a clay court, as well. It’s just finding the balance. I think that clay definitely teaches you that.”

British No 1 Cameron Norrie, fresh from winning a first clay-court title in Lyon at the weekend, begins his campaign against Manuel Guinard of France on Monday.

Dan Evans, Harriet Dart and Heather Watson are also in action on a bumper day of action for the Brits.