Race for Europe: Who needs what in final week? 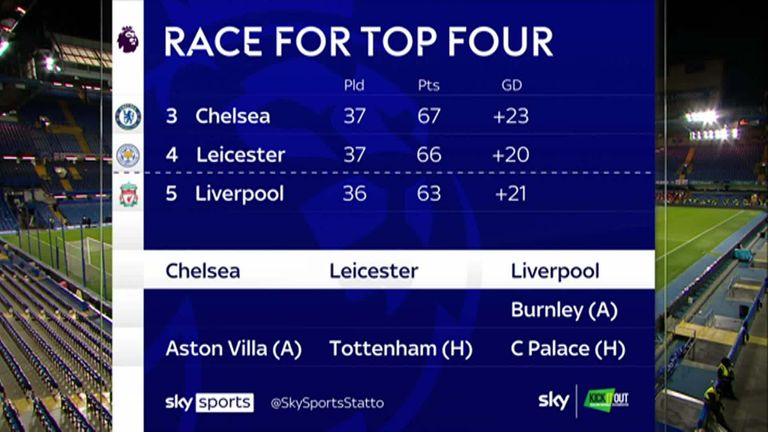 The race is on as the Premier League season heads towards an exciting conclusion – who will qualify for the Champions League, Europa League and the new Europa Conference League?

As the 2020/21 campaign enters its final week, the top-four battle is going down to the wire, with Liverpool travelling to Burnley on Wednesday following Leicester’s loss at Chelsea and looking to keep the pressure on before Sunday’s big finale.

Tottenham and West Ham are scrapping below them but who will finish where? And how could the outcomes of the Champions League and Europa League finals affect which side plays in which competition?

It gets a little complicated but keep in mind, the maximum number of English teams in UEFA competitions is seven…

The top four teams in the Premier League qualify for the group stages of the Champions League.

Winning the Champions League or Europa League also guarantees a place in the group stages.

There was only one scenario that could play out and mean the fourth-placed finisher misses out on Champions League football.

But Arsenal’s Europa League exit to Villarreal in the semi-finals means the top four are now assured of a Champions League berth. At the moment, that is Manchester City, Manchester United, Chelsea and Leicester.

There are two Europa League spots available to English clubs. One goes to the team which finishes fifth in the Premier League – currently Liverpool – while the second goes to the side which wins the FA Cup.

Leicester lifted that trophy but remain on course to qualify for the Champions League through their Premier League position. That means their Europa League spot for winning the FA Cup will be passed on to the next highest-ranked Premier League side which has not qualified for a UEFA competition – currently sixth-placed Tottenham.

As well as the Champions League and the Europa League, the Europa Conference League launches next season.

The idea behind the Europa Conference League is to give more clubs a taste of European football, particularly sides from countries that struggle to qualify for the other two UEFA competitions. But there’s a spot up for grabs for English clubs, too.

The winner of the Carabao Cup was guaranteed to qualify for the Europa Conference League play-off round. But after Manchester City lifted the trophy – having already secured a place in the Champions League qualifying spot – their place will be passed on to the next highest-ranked Premier League side which has not qualified for a UEFA competition.

Club by club – who needs what to qualify for Europe

Courtesy of being crowned Premier League champions, City will be in the Champions League next season – and they could, of course, still win the trophy this year in May 29’s final.

Despite a dismal recent run of form, which has seen United take just one point from three home games against Leicester, Liverpool and Fulham, they have been confirmed as runners-up following Leicester’s defeat at Chelsea.

They could have, in any case, qualified for the Champions League via the Europa League – United are in the final on May 26.

Nearly there now. But even after their win over Leicester on Tuesday night, Chelsea still require a win at Aston Villa on the final day to be certain of qualifying for the Champions League next season. But a top-four finish will also be guaranteed if Liverpool lose at Burnley. A draw for Liverpool would also mean that a draw for Chelsea at Villa would be enough too.

In any case, Thomas Tuchel’s team could still qualify for next season’s Champions League by winning the competition outright this season – if you have not heard, Chelsea face Man City in the final on May 29.

Leicester are now certain to play European football next season after winning the FA Cup.

But in which European competition will they be playing next season?

The defeat at Chelsea, just days after the FA Cup win, leaves Brendan Rodgers’ side vulnerable to a second successive season in which they suffer late Champions League qualification pain. That sentiment will, of course, be revised if Liverpool fail to win at Burnley. But if Jurgen Klopp’s side win, they will move ahead of Leicester on goal difference ahead of the final day when the Foxes, at home to Spurs, appear to have the tougher assignment.

After that winning goal by goalkeeper Alisson at West Brom and Leicester’s defeat at Chelsea, Liverpool are within touching distance of the top four and a victory at Burnley on Wednesday evening will move the Reds above Leicester.

Given both teams then play at home on the final day, it’s a realistic prospect for Champions League qualification to ultimately be decided on goal difference. At present, Liverpool’s goal difference is +21 and Leicester’s +20.

Chelsea’s win over Leicester means that Tottenham can no longer qualify for the Champions League.

However, Sunday’s victory over Wolves means that, unless there is a huge swing in goal difference, Tottenham will be sure of qualifying for Europe if they win their two remaining games.

And while it is goal difference which puts Tottenham – plus 22 – above West Ham – plus 10 – in the Premier League table at the moment, it is also worth noting that Tottenham’s goal difference is so superior to Everton’s – plus 4 – that it effectively counts as an extra point over Carlo Ancelotti’s team as well.

Meanwhile, Tottenham are four points ahead of rivals Arsenal with both north London clubs having two games still to play. As such, a victory against either Villa or Leicester would be enough to guarantee local end-of-season bragging rights.

As with Tottenham, West Ham’s hopes of qualifying for the Champions League are over following Chelsea’s win against Leicester.

While it’s still mathematically possible for the Hammers to finish above Liverpool in fifth, their more realistic target in the final week will be to take sixth – and indeed ensure that Everton, Arsenal or Leeds don’t overtake them.

After a fabulous late-season run of form, European football is still a possibility for Leeds. But for it to be achieved, they will require either West Ham or Tottenham to slump in the final week and for Arsenal and Everton to stumble as well.

Everton have lost form at the worst possible time in their bid to land European football next season.

The win at West Ham on May 9 has been sandwiched by three defeats and the shock loss at home to relegated Sheffield United this weekend has suddenly plunged Everton’s hopes of qualifying for Europe into a remote prospect.

But with two games to go, it is also the case that Everton could finish anywhere between sixth and 10th. However, one certainty delivered this weekend is that Everton will finish behind Liverpool in the league table.

Arsenal are mathematically unable to make the top four, and their best chance of qualifying for the Champions League was extinguished when they were knocked out of the Europa League by Villarreal in the semi-finals.

Amassing enough points to reach the Europa League or even Europa Conference League still looks unlikely, leaving the club without European football for the first time in 25 years. However, were they to follow up their win at Chelsea with victories against Palace and Brighton, then Arsenal would end the season with 61 points – which might be enough.