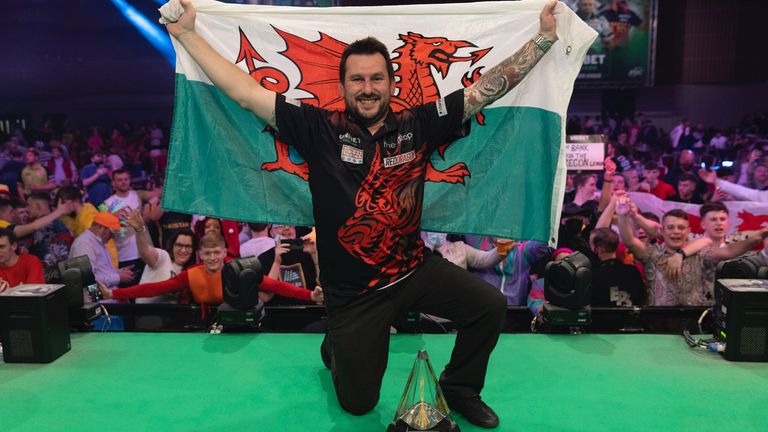 After the 2020 and 2021 tournaments were played predominantly behind closed doors, fans will return in 2022 as the Premier League reverts to its original Thursday evening format, with the opening night taking place at Cardiff’s Motorpoint Arena on February 3 – live on Sky Sports.

Former champions Gary Anderson and James Wade are the stalwarts of this year’s tournament, while World Championship runner-up Michael Smith returns after a brief hiatus.

Meanwhile, Joe Cullen will make his debut after claiming his maiden PDC major title at the Masters.

This year’s Premier League takes on a new structure, with individual knockout tournaments taking place every Thursday. As we look ahead to what promises to be a fascinating 17 weeks of action, we have profiled the stars vying for one of the sport’s most coveted titles…

Price returns to the Premier League fold having been ruled out of last year’s showpiece after returning a positive Covid test on the eve of the tournament, and the Welshman has a point to prove with Wright eyeing his world No 1 spot.

‘The Iceman’ endured a nightmare campaign on debut in 2018, suffering elimination without a win to his name, before recording consecutive fifth-placed finishes in 2019 and 2020.

The 36-year-old landed a third Grand Slam title last term, but, after surrendering his world title following a quarter-final exit, he will be desperate to bounce back by featuring in the play-off picture for the first time.

Wright is riding the crest of a wave, fresh from becoming the sixth player to land multiple PDC World Championship titles following his second triumph in three years at Alexandra Palace.

The colourful Scot was widely criticised last summer after insisting he would lift both the World Matchplay and World Championship titles, but he delivered on his promise, adding the World Cup and Players Championship Finals to his growing haul.

‘Snakebite’ capped off his superiority in 2021 by claiming more ranking titles than any other player, but he has vowed to target the Premier League this term, having made just two play-off appearances in eight seasons – an underwhelming return for a player of his calibre.

Beware of the wounded animal. Five-time winner Van Gerwen will be desperate to banish memories of a tumultuous 2021 campaign, culminating in his World Championship withdrawal due to a positive Covid test.

‘The Green Machine’ is enduring his most barren spell since 2012 – the year of his first major triumph in the PDC – having failed to win a major televised event since lifting the Players Championship Finals title in November 2020.

However, the three-time world champion produced his blistering best on a more frequent basis during the latter months of 2021, and, with the added incentive of trying to equal Phil Taylor’s haul of six Premier League titles, the Dutchman will be a force to be reckoned with.

Wade was controversially omitted from last year’s tournament until he was handed a reprieve as a last-minute replacement for Price, but there were no arguments about his inclusion this time around.

‘The Machine’ lived up to his nickname in 2021; his UK Open triumph in March saw him become just the third player in PDC history to clinch a 10th individual major title, while he also featured in Grand Slam and World Championship semi-finals.

The left-hander is poised to make his 12th Premier League appearance this year – a record only bettered by Raymond van Barneveld and Taylor, and as one of the most clinical combination finishers in the sport, he remains a formidable opponent for anybody.

Smith made no secret of his disappointment at being left out of last year’s Premier League, but ‘Bully Boy’ reaffirmed his credentials with a stunning display at the World Championship, obliterating the record for most maximums in a tournament.

The St Helens star came agonisingly close to landing an elusive first major title, only to succumb 7-5 to Wright, having dumped out Clayton and defending champion Price en route to his second world final in just four years.

The 31-year-old – a finalist in 2018 – is one of the most prodigious talents in the sport, and given the way he has matured over the last 12 months, you feel he is on the cusp of achieving something special. Could that start with a maiden Premier League crown?

‘The Flying Scotsman’ endured a largely frustrating 2021 campaign, failing to reach a televised quarter-final prior to the World Championship.

Nevertheless, Anderson rolled back the years to reach his sixth semi-final in eight years at Alexandra Palace – suffering a narrow defeat to Wright in one of the best games ever staged at the iconic north London venue.

The two-time world champion is remarkably without a televised title since September 2018, but he has been ultra-consistent in the Premier League arena, qualifying for the play-offs in six of his previous seven seasons.

‘The Ferret’ enjoyed a year to remember in 2021. The diminutive Welshman only qualified for last year’s event by virtue of his victory at the season-opening Masters, before storming to Premier League glory on debut.

Clayton also added World Series Finals and World Grand Prix titles to his expanding resume, and it took an inspired performance from Smith to thwart his hopes of a maiden World Championship crown.

The 47-year-old remains eighth in the world due to three of his four titles coming in non-ranking events, but he will be among the favourites as he bids to become just the third player in Premier League history to successfully defend the title.

After years of being one of the sport’s most prominent ‘nearly men’, Cullen finally became a major winner on Sunday with his Masters final win over Dave Chisnall.

‘The Rockstar’ has long been tipped for a significant breakthrough, and he now takes his place among the darting elite for the Thursday night roadshow.

Cullen will look at how Clayton propelled himself into the big-time after a Masters title 12 months ago. Could the 32-year-old emulate The Ferret’s achievement of a Masters-Premier League double?

Watch live coverage of the 2022 Premier League on Sky Sports – the action starts on Thursday February 3 at Cardiff’s Motorpoint Arena, with home favourites Gerwyn Price and Jonny Clayton in action.