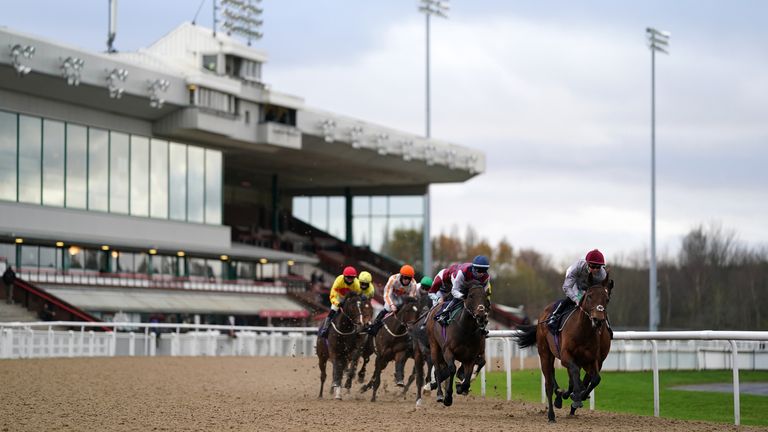 Should Plumpton survive an early-morning inspection for frost, there is a quality midweek jumps card on offer, while Wolverhampton and Southwell host all-weather action, all live on Sky Sports Racing from 1.25pm.

The feature Weatherbys Cheltenham Festival Betting Guide Veterans’ Handicap Chase (3.00) looks like a cracker with nine heading to post over an extended three miles and one furlong.

Seamus Mullins’ I See You Well has some useful course form and ran a race full of promise when fourth in the Sussex National here at the start of the month. Micheal Nolan takes the ride from a 1lb lower mark.

At 13 years of age, Potters Legend is indeed a legend for Lucy Wadham and will be popular having been knocking on the door in recent runs, including when runner-up at Catterick in November.

Trixster could head the dangers, however, as Tim Vaughan’s charge is relatively lightly raced over fences and will look to build on his Warwick second last month.

In-form pair Politics and Momaer top a field of seven for an excellent renewal of the Spreadex Sports First Goalscorer Insurance Handicap (3.50).

Politics will shoulder a 5lb penalty for winning at Lingfield seven days ago and Daniel Muscutt keeps the ride.

Momaer is trained by the in-form Mark Loughnane with leading all-weather apprentice Billy Loughnane riding. Momaer has only had three starts to date and got off the mark in novice company at Lingfield earlier this month.

Ivan Furtado’s The Nail Gunner chased home Mick Appleby’s useful sort Bond Boy over this course and distance earlier in the month, only headed in the final furlong before plugging on.

The TalkSPORT Download The App Maiden Stakes (2.10) looks a good opportunity for the David Simcock-trained Super Mo to get off the mark.

Sent out twice as a two-year-old in August last year, the son of Uncle Mo was a valiant fourth on debut before finishing best of the rest behind subsequent Group One winner Dubai Mile.

Hugo Palmer’s Chronograph will look to build on a promising debut over this course and distance 15 days ago when finishing third.

Meanwhile, there are two debutants in the field as James Tate hands a first start to Majestic Warrior and Charlie Johnston sends out Majestic Jameela.

Recent Southwell winner Finery tops a field of seven for the It’s Time To Turn To Talksport Fillies’ Handicap (6.45).

Michael Appleby’s six-year-old drops back a furlong under Erika Parkinson, with the trainer appearing to hold a strong hand as stablemate Queen Of Burgundy bids to build on a solid run of form for Fredrick Larson.

Falesia Beach represents Jonathan Portman and Kevin Stott and bids to follow up her recent course-and-distance victory with blinkers added.

Watch every race from Plumpton, Wolverhampton and Southwell all live on Sky Sports Racing on Wednesday, January 18.