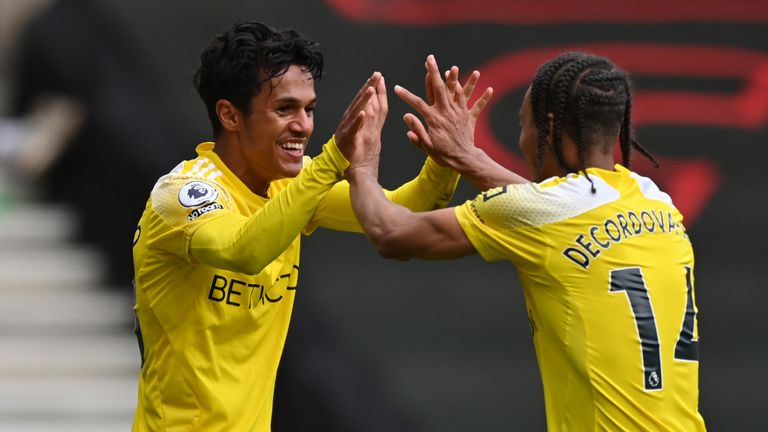 Fulham will be missing from the Premier League next season after their relegation was confirmed following the home defeat to Burnley last Monday, but Scott Parker was encouraged by the full debut of Fabio Carvalho against Southampton, a loss that he described as being a “snapshot of their season”.

The Cottagers are coming to terms with a second relegation in three years, and while this marked a seventh defeat in eight games since their spirited win at Liverpool, Carvalho showed signs he could play an important part in taking the club off this rollercoaster of ups and downs.

“Fabio was fantastic,” said Parker. “This team has been in need of goals. His overall performance was full of confidence. He showed his quality. It didn’t surprise me.

“He’s shown that he can score at Under-23 level and in training. He was in the team because he deserved to be in it, not because it was an opportunity. The one shining bright light from today was Fabio. He was the massive plus from today.”

Fulham were widely criticised in 2018/19 when they were relegated despite spending almost £100m on transfers, conceding 81 goals in the process, and while more slack defending contributed to a 19th defeat of the season, Carvalho took his goal extremely well.

Aged 18 years and 258 days, he became Fulham’s third-youngest goalscorer in the Premier League behind only Ryan Sessegnon (18y 155d) and Collins John (18y 176d). With a number of players’ loan contracts due to end, he looks a player the west Londoners can build their future around.
Ben Grounds

Is Torres the ready-made replacement for Aguero?

It was a sensational performance from Ferran Torres against Newcastle. And, as Man City look for Sergio Aguero’s successor, the Spaniard has put himself at the forefront of the reckoning.

First – the stats. He had the highest number of shots (5) and all three that were on target ended up in the back of the net. He has now scored seven Premier League goals this season – almost doubling his tally in one outing at St James’ Park. Five of those goals have now come in City’s last four Premier League games too.

Each of the goals came with its own sensational finish. The first was an audacious flick to send Ilkay Gundogan’s free-kick goalwards. His second was a smart finish from a Gabriel Jesus cross, while his third showed brilliant intuition to turn home Joao Cancelo’s rebounded effort off the post. He showed superb skill, brilliant reactions and vital instincts through the game that will serve him well in the Premier League.

Although City initially signed him as a winger in the summer, Torres is proving to have the makings of a talented striker. It could not come at a better time for City either with one of the Premier League’s best, Sergio Aguero, leaving the club at the end of the season.

After the game, Pep Guardiola told Sky Sports: “Yeah, he can be [a No 9]. We will use him, we used him and he was brilliant.

“He came as a winger, but he has to think about [being] a striker. When Sergio, Gabriel were out, he was there… He didn’t have many minutes, but when he played, he had a sense of goal.

“I don’t know what’s going to happen. Maybe we buy a striker, maybe not.

“We have a guy, he’s young. A good transfer. I can use him on the left, right or as a striker. The season is too long, we can’t play just 11 players, the best striker we can buy can’t play all the minutes. You have to have 50, 60, 70 top players you want, then the academy, we have two, three, four or so interesting players I’m pretty sure next season will help us.”

Torres is still only 21 and it is his first season in the Premier League. Yes, he has produced some good numbers considering the limited game time he has had in spells, but to be anointed as the next Aguero, he must produce the same as he did at Newcastle on a consistent basis.

He must also adapt to a new central role in attack, although based on Friday’s performance, that will not take much. The future is bright for Torres, but there must be caution over placing too much pressure on his shoulders after Aguero’s departure.
Charlotte Marsh

Rodrigo showing flashes of his class

There’s a reason Leeds splashed out their record sum – more than for star winger Raphinha – to bring in Rodrigo from Valencia last summer, regardless of what his meagre goal tally or minutes suggest.

Leeds don’t get many transfers wrong these days although even Eddie Nketiah’s arrival could not unseat Patrick Bamford in the Championship last season, but Rodrigo has followed suit this year and appeared one of few not to shine in a superb campaign for the club finally back in the Premier League.

The 30-year-old has played 25 times for Spain, and three years ago scored 16 times in La Liga for Valencia. Sometimes it’s just a case of a bad fit, to a club or a league. But after a slow start, including being subbed on and then off again against Chelsea in March, things are starting to click.

In a half-hour cameo following one of Bamford’s quieter afternoons at Turf Moor on Saturday, Rodrigo scored two excellently taken goals, the first made by an exquisite first touch and the second by some superb composure to round Bailey Peacock-Farrell and score.

As well as adapting to a new league, confidence is key for any striker and he finally has it. Some glowing words from his manager after the match will only help that further.

“Rodrigo is a player at a very high level,” said Marcelo Bielsa. “He’s a player, like I’ve said before, that it takes him a while to get to his full form. When he finally finds his full form he’s a player that is very unbalancing.

“I think in the game against Tottenham and the game today, I think we saw a version of Rodrigo close to what he’s capable of.”

Bamford will be looking over his shoulder if this continues; even with 15 goals this season, no one is infallible and having scored one in his last seven, the tide could easily turn.

But for Leeds, and Bielsa, what a wonderful problem to have.
Ron Walker

Nathan Tella was rejected by Arsenal after a decade playing in their youth set-up but in scoring and providing an assist in Southampton’s victory over Fulham, the forward showed just why he was worth persevering with.

Theo Walcott was warming up when Tella struck his first senior goal, adding to Che Adams’ opener before wheeling away to the touchline to celebrate with a player he knows so well from his time at the Gunners.

It was fitting that he would then set up Walcott for Saints’ third, and Ralph Hasenhuttl told the 21-year-old to cherish the moment after his battle to break into the top flight, made even tougher by a serious knee injury.

“He’s now on the scorer list in the Premier League and it’s a special moment for him,” Hasenhuttl said. “His smile on the face is always there and this is what I really like about him. He enjoys working for the team, he enjoys training with us and he enjoys every week in which he is allowed to play football.

“Maybe the ACL injury helped him to understand how special it is to be part of a Premier League team, and he’s a very big talent from our academy. It’s a signal for all the other players coming up that there’s a chance to go through [to the senior team].”

Tella’s composed finish came in his 21st Premier League appearance, finding the back of the net just 98 seconds after coming on as a substitute. Saints are up to 13th and have found their scoring touch again. With prize money at stake, Tella has played himself into a position to start at least one of the remaining games against Leeds and West Ham.
Ben Grounds

All is well with Danny boy

Danny Welbeck is certainly showing his worth at Premier League at a perfect time in his career. Snapped up on a performance-based deal by Brighton, Welbeck has found his fitness and more importantly is now finding the net for Brighton just as his contract is about to expire in June. This was the second home game in a row the former England striker has found the net. Welbeck rifled home 11 minutes from against Leeds after executing a perfect Cruyff turn on a dropping ball and produced another silky finish in this draw with the Hammers.

It was a performance where perseverance was rewarded. Welbeck didn’t stop running all night with his movement excellent at times, despite not being found too much by some poor approach play from his team-mates. When the pass did arrive – from Percy Tau – Welbeck was deadly with his finish. This was his 50th Premier League goal and there is certainly a lot of life left in him at Premier League level judged on his performances over the past eight weeks.

Graham Potter has confirmed there is an “intention” to reward Welbeck with another deal. Now he’s fit and firing, it’s a no-brainer.
Lewis Jones

All the talk at Arsenal is about young guns Emile Smith Rowe and Bukayo Saka, but away from the Emirates Stadium, it’s another young Gunner who is putting his name up in lights at Newcastle.

Joe Willock, who joined Newcastle on loan from Arsenal in January, put in another energetic display for Steve Bruce’s side and he got himself on the score sheet yet again during their 4-3 defeat to Premier League champions Man City on Friday evening.

It was his fifth goal in as many league games and his sixth during a brilliant spell at St James’ Park, which is more than any Arsenal player has scored in the same period.

“We have to respect that Joe is Arsenal’s player but if it’s possible we’d love to keep him,” said Steve Bruce after the game and it’s so easy to see why Newcastle would be so desperate to keep him on Tyneside.

However, with Willock in scintillating form, they could be left disappointed as Mikel Arteta watches on with interest.

With daily reports suggesting a huge overhaul of Arsenal’s squad in the summer, Arteta has a huge decision to make regarding Willock’s future. Does he cash in to help fund any sort of rebuild? Or with a good core of young players coming through at the north London club, does he give the 21-year-old another chance at the Emirates Stadium?

If it’s the former, there’s no doubt Newcastle will be at the front of the queue to give him a permanent home.
Oliver Yew