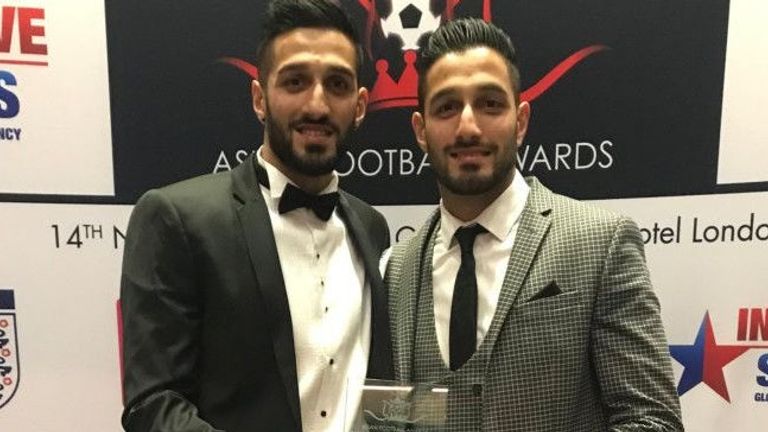 Some of the best talent from across the South Asian community gathered at the Bridgestone Arena near Wembley Stadium for a first-of-its-kind player event as part of the PFA’s Asian Inclusion Mentoring Scheme (AIMS).

Millwall coach Abdul Habib and Panjab FA international manager Manraj Singh Sucha put the players through their paces, while parents networked and shared their experiences with one another before the younger academy kids got the opportunity to take part in a Q&A with the scholars and pro players.

Thandi, who spent 10 years in Leicester’s youth ranks before going on to turn pro at Stoke in 2018, said he hoped the experience would prove invaluable to talented South Asian youngsters already in the academy system.

“I am so proud to see all of this,” the 21-year-old attacking right-back told Sky Sports News.

“To put a session on and get everyone together especially after COVID [lockdowns is brilliant] – the momentum around South Asians in the game has been building up and we’ve been wanting to do this [in person rather than on Zoom].

“I think it’s a great experience for the kids to see players of different age groups at different clubs, it’s amazing to get them all in one place.”

The PFA scheme aims to enhance the experience of South Asian footballers at all levels of the professional game by creating a structured network of support that allows them to thrive.

Danny Batth, Neil Taylor, Otis Khan and Zesh Rehman are among the senior footballers mentoring scholars and emerging pros, with those players, in turn, sharing their academy experiences with their younger peers.

Defender Gillela, 21, told Sky Sports News: “I love doing things like this, giving back and helping and sharing my knowledge where I can. If I was in their shoes I would love to have spoken to someone in my current position.

“It’s like gold dust, even for me, speaking to the likes of Danny Batth, Mal Benning, Neil Taylor – these are big names in the football league, the football community and the football world.

“For me, learning off them, is [exactly] how I think about trying to give back to the younger ones coming through now.”

Defensive midfielder Sonny Singh is enjoying every minute of life as a first-year scholar at Sunderland having seen both sides of the beautiful game despite being just 17.

“I’m just happy I can also share my experiences and my journey towards becoming a footballer,” Singh said after taking questions from South Asian academy players aged between eight and 15.

“I know how ruthless football can be because I was released at a young age, at the age of 10, and you think the world is going to end – [at that age] you’re thinking you’d be at the club forever. It’s just about how you bounce back. The lows are what make you come back stronger and those setbacks help you learn more about the game.

“You know not it’s not going to be an easy road, you know you are going to have to work hard, but you’re [likely] going to have the support from your family – I have great parents who have supported me through my lows.

“When you’re up it’s amazing, you feel like you are on top of the world, but the main thing is enjoying it and being happy what you are doing.”

The number of contracted British South Asian league footballers hit an all-time high of 16 towards the end of last season but a number are out of contract and need to finalise moves to other clubs.

Player inclusion executive, Riz Rehman heads up the PFA’s AIMS project. He told Sky Sports News: “We all want to see the same thing. We want to see Asians not just on the pitch but also in the stands as fans, we all support England, we love football, so we want to see more players like us playing at the highest level as well.

Asked what the impact of seeing so many talented British South Asian footballers altogether might be on the wider community, Rehman said: “That’s why we did it. I think getting that visual so people can see it [is so important].

“I think there is too much talking – and I have said it publicly as well – we want action, we want work.

“We want to get the players involved. The players don’t want to talk, the senior lads. So, getting that picture today with players from Brighton, Fulham, Crystal Palace, Man Utd, Sunderland from all four leagues [including] the Premier League, international [age-group] players [was so important].

“If that goes out, hopefully, there are parents out there – kids will see that, and I want them to get involved. Hopefully, a nine-year-old will see that and say: ‘I can play for Man Utd. He looks like me dad, can I play?”

For more stories, features and videos, visit our groundbreaking South Asians in Football page on skysports.com and stay tuned to Sky Sports News and our Sky Sports digital platforms.