Pep: Last season one of my best despite CL final defeat 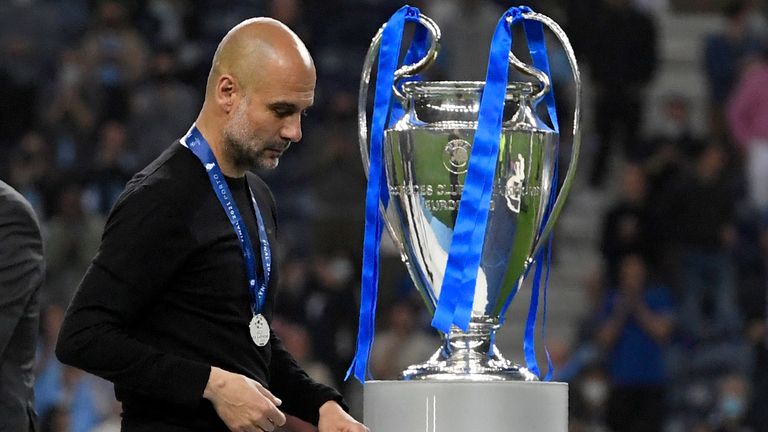 Pep Guardiola insists he will proudly remember last season as one of the best of his career despite the agony of Champions League final defeat.

Guardiola’s Manchester City enjoyed another outstanding campaign on the domestic front as they powered to the Premier League title, won the Carabao Cup and reached the FA Cup semi-finals.

Yet the club’s long-held European ambitions remained unfulfilled as City fell short in the continent’s showpiece final, losing to Chelsea in Porto.

“It was unbelievable, great, an exceptional season,” said Guardiola.

“We were disappointed to lose the final, of course, but after one or two days when you are more calm, you can say, ‘Wow’ and how good it was.

“It was an exceptional season, one of the best I have lived in my life, by far. We won two titles, arrived in the final of the Champions League, the semi-final of the FA Cup. It was really good for many reasons.

“Yesterday I congratulated the team – it was the first time we were all together – for what we have done last season. It will be in our memories forever.”

City begin the defence of their title at Tottenham on Sunday. The build-up to the game has been overshadowed by speculation over the future of England captain Harry Kane, who continues to be heavily linked with Guardiola’s side.

Guardiola confirmed City’s interest in the player last week but was unwilling to discuss the matter further in his latest press conference.

The Spaniard said: “I answered this question in the previous press conference. He’s a player from Tottenham Hotspur. I am not going to talk about him.

“I made an exception last time but usually I don’t talk about transfers. It’s not my business. That’s all.”

Guardiola enjoyed City’s successes last season but has now put them to one side to focus on the new campaign. City may still be pursuing Kane after spending £100m on Jack Grealish last week but, with other teams strengthening, Guardiola says there is no room for complacency.

He said: “Every season since I arrived five years ago I have had the feeling every season is tougher, it is stronger, better teams.

“Every season when you begin it is a new challenge. We celebrated our title. Now it is in our cabinet, in our memories and we start again.”

City midfielder Phil Foden revealed this week he expects to miss the first three or four weeks of the season with the foot injury sustained during England’s run to the Euro 2020 final.

Playmaker Kevin De Bruyne is also not yet back in full training after suffering an ankle injury on international duty.

Guardiola said: “He’s getting better every day but we’re still waiting. He cannot do the full training sessions, just partial, some with us, some alone. We will see what happens in the next days.”

Raheem Sterling hopes the arrival of Jack Grealish at Manchester City will help him increase his goal tally.

The 26-year-old is looking forward to linking up with England team-mate Grealish at club level following the former Aston Villa captain’s British record £100m switch to the Etihad Stadium.

Sterling netted just 14 times in all competitions for Pep Guardiola’s side last season – 17 less than the 2019/20 campaign – but, playing alongside Grealish, he is looking for more this time.

“They have signed a great player and someone that wants to prove himself at the highest level,” said Sterling. “I don’t think there is any better club for him to try and do that.

“He is a player that always wants the ball, he gets in good pockets of space and he is creative.

“It adds another creative player to this team which I am really excited about so hopefully he can add a few more goals to my tally.

“When you add good players to your team it is always a good thing. He is a player I believe can truly have a great career here.”