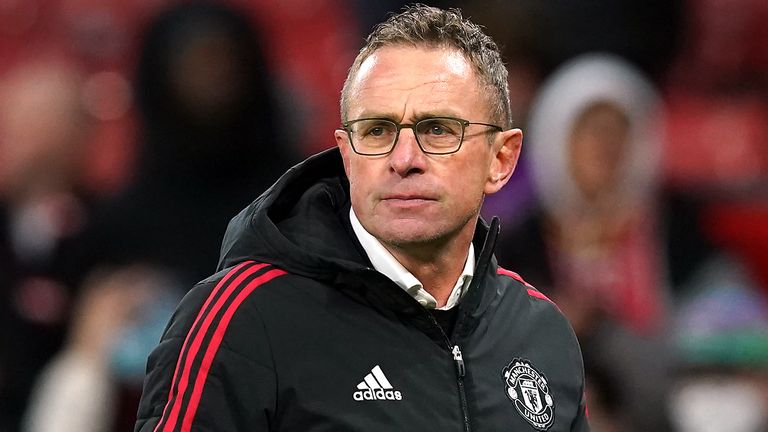 Ralf Rangnick is battling to unite the Manchester United dressing room as he faces up to his first crisis since taking charge.

Newcastle United have their eyes on four current Arsenal stars as they look to bolster their squad this month.

Barcelona manager Xavi Hernandez has told Ousmane Dembele to stay at Camp Nou, with the winger currently locked in a contract standoff with the club.

Manchester City are open to swapping Aymeric Laporte for Barcelona midfielder Frenkie de Jong, according to reports in Spain.

Real Madrid are no longer in the running to sign Antonio Rudiger after talks with the Chelsea defender hit a stumbling block, according to reports in Spain.

Borussia Dortmund star Erling Haaland has reportedly been told by his club that he must decide his future by the end of January as speculation continues.

Tottenham’s bid to sign AC Milan’s midfielder Franck Kessie in January has reportedly been frustrated by the Serie A giants’ refusal to accept a swap deal involving Tanguy Ndombele.

Chelsea are reportedly set to fine Romelu Lukaku £417,000 over his controversial interview despite the striker clearing the air with Thomas Tuchel.

Manchester United fan fury after their horror show defeat by Wolves is set to go through the roof with the Glazer family sharing in a new £11m windfall.

Brighton and Crystal Palace remain keen on Eddie Nketiah – and would like to sign him in this window if possible.

Diego Carlos, the Sevilla centre-back, is on Newcastle’s list of potential signings as they look at alternatives to Sven Botman.

Newcastle, despite being threatened by relegation, are close to signing Kieran Trippier from Atletico Madrid and are also targeting a striker during the window.

Paul Pogba can talk to European clubs about a pre-contract for next season but he will return from injury at Manchester United before making any decision on his future.

Monaco are one of the clubs monitoring Christian Eriksen as he steps up his training this month after suffering a cardiac arrest during Euro 2020 last year.

Stoke were dealt a blow when Harry Souttar suffered a serious knee injury which is expected to rule him out of the season. But they are considering a very similar replacement in his brother John.

The Napoli and Italy forward, Lorenzo Insigne, has agreed a deal to join the MLS club Toronto FC this summer.

The Ajax and Cameroon international goalkeeper, André Onana, is poised to sign for the Serie A champions Internazionale.

Ianis Hagi is set to be offered a new contract at Rangers – according to his dad, Gheorghe.

Rangers have missed out on Heerenveen midfielder Joey Veerman as he joins boyhood club PSV Eindhoven.

Wantaway Zinedine Ferhat has reportedly attempted to force a January transfer move amid links with Celtic.