Papers: Barcelona giving up on Dembele 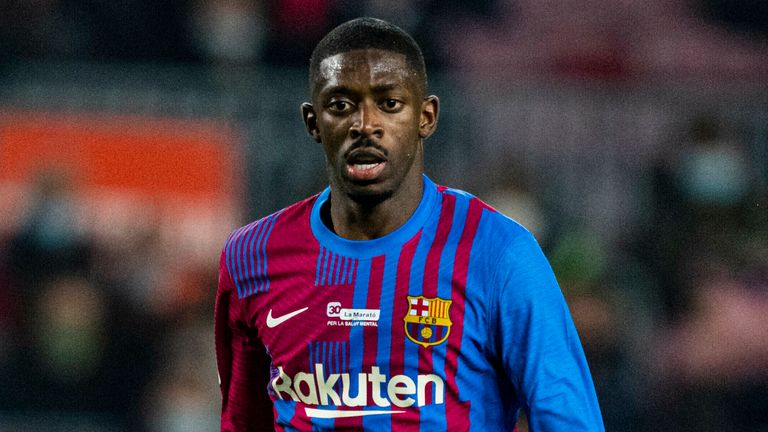 Barcelona are close to giving up on hopes that Ousmane Dembele will sign a new contract and expect to lose him to the Premier League in the summer.

Manchester United are plotting a move for Borussia Monchengladbach midfielder Denis Zakaria who has also attracted interest from Liverpool.

Arsenal are considering a summer move for Leicester City midfielder Youri Tielemans, who will then be entering the final year of his contract.

Georginio Wijnaldum is reported to have become “isolated” at Paris Saint-Germain because of speculation surrounding his future.

Lukasz Fabianski is set to sign a new one-year deal with West Ham to remain part of their goalkeeper team next season.

Sunderland are set to make a move for Peterborough striker Jonson Clarke-Harris.

Team GB athletes have been told not to take mobiles to Beijing for the 2022 Winter Olympics because of fears over spying and will instead be provided with throw-away phones.

Chelsea have revived their interest in Sevilla defender Jules Kounde and are also looking at fellow Frenchmen Presnel Kimpemba and Aurelien Tchouameni.

Newcastle are trying pull off an audacious £80m swoop for RB Leipzig midfielder Amadou Haidara, who has also been linked with a move to Manchester United.

Chelsea are recalling midfielder Kenedy from his loan spell in Brazil with Flamengo because of their injury crisis.

Arsenal and West Ham are battling it out for the signature of Eintracht Frankfurt winger Filip Kostic.

Antonio Rudiger could perform a U-turn and stay at Chelsea on fresh terms, according to a report in Germany.

Newcastle have launched a fresh bid for Sevilla defender Diego Carlos and want him on board in time to face Watford this weekend.

Everton have been handed a timely boost with the return to training of key players Richarlison and Yerry Mina.

Manchester City are ready to try and tempt Flamengo sensation Matheus Franca to come to the Premier League but the teenage midfielder has an £83m release clause.

Barcelona initially wanted Philippe Coutinho’s loan deal with Aston Villa to run until the end of the 2022/23 season.

Barcelona could offload Memphis Depay in a swap deal with Juventus for Alvaro Morata.

Samuel Umtiti could still leave Barcelona for Newcastle United this month despite signing a new contract earlier this week, which was designed mainly to allow the club to register Ferran Torres.

Rangers tried to make a last-ditch move to sign Arsenal defender Harry Clarke on a permanent deal before he completed his loan switch to Hibs.