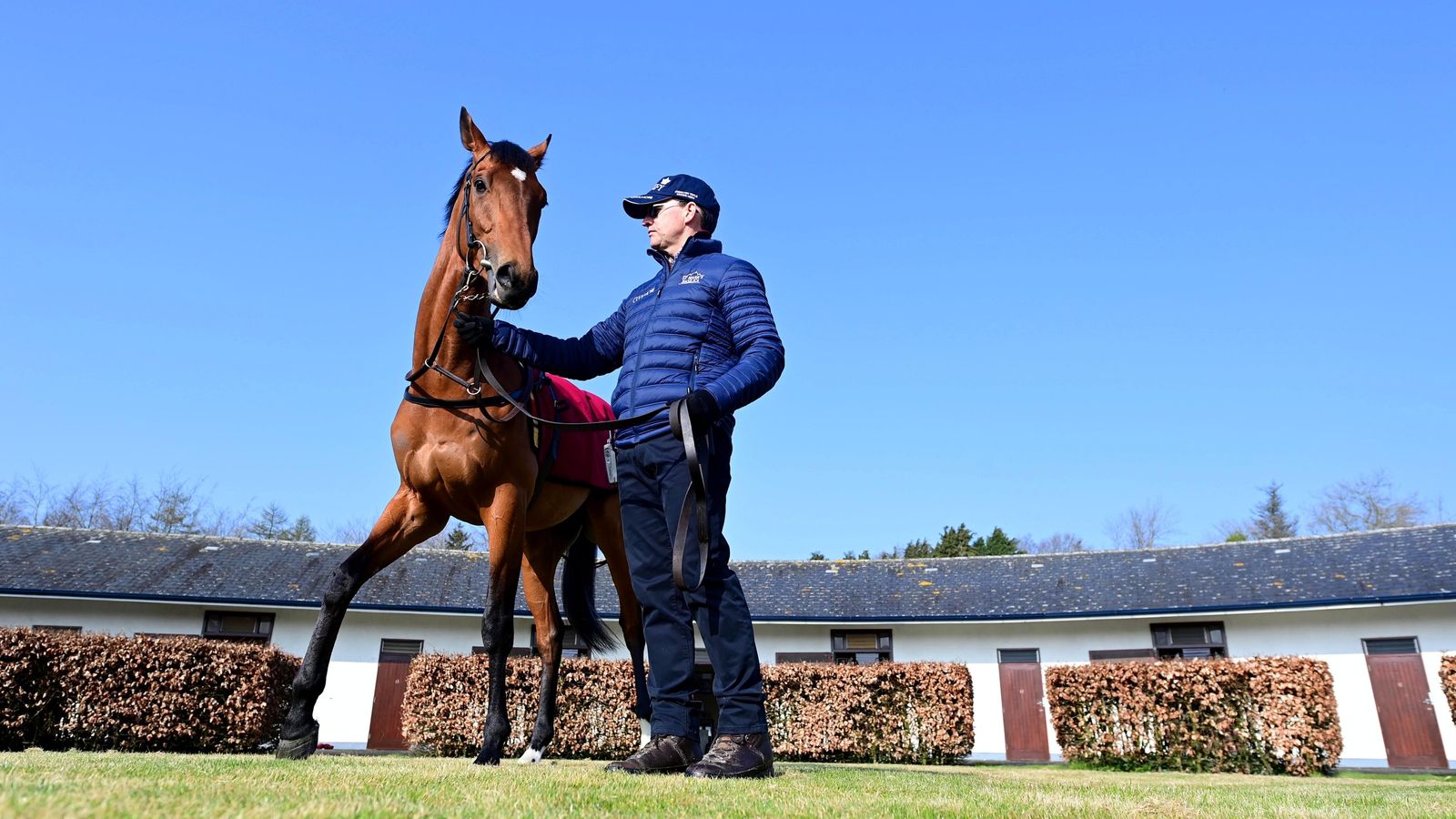 Luxembourg and Point Lonsdale give Aidan O’Brien a strong hand as the master of Ballydoyle goes in search of an 11th success in the Qipco 2000 Guineas at Newmarket.

A son of O’Brien’s 2012 winner Camelot, Luxembourg was unbeaten in three starts as a juvenile and emulated his sire with victory in the Vertem Futurity Trophy at Doncaster in October.

Camelot, of course, went on to win the Guineas and the Derby, for which Luxembourg heads ante-post lists, before being narrowly denied the fabled Triple Crown in the St Leger.

Like his sire Luxembourg is expected to step up in trip later in the year, but O’Brien is happy to give him a first tilt at Classic glory over the Rowley Mile.

“We’ve been happy with Luxembourg and everything has gone well all the way along with him,” O’Brien said.

“He was away at the Curragh five weeks ago and we were happy with what he did and we’ve been happy with everything since.

“We saw in his three runs last season that he’s a high cruiser and obviously he won over a mile last year. Obviously it is a big ask to start him off in the Guineas and he is looking like he will be a middle-distance horse, but we started similar horses like Camelot and Australia in the Guineas.

“We think and hope it is the right place to start. He seems in good form and we will learn a lot about him.”

With Ryan Moore siding with Luxembourg, Frankie Dettori comes in for the ride on Point Lonsdale, who lost his unbeaten record when finishing second to short-priced Guineas favourite Native Trail at the Curragh on his final start at two.

He is behind only his stablemate in the Epsom market, and O’Brien added: “Point Lonsdale is in good form too and he was away at the Curragh as well.

“He hasn’t run beyond seven furlongs, but we always thought that he would stay.

“Everything has gone well with him and we’ve been happy with him since the Curragh.”

Dettori has a fine big-race record when teaming up with O’Brien, and said in his blog for Sporting Index: “I know Point Lonsdale quite well even though I’ve not ridden him. He beat me in the Chesham last year when I was on Reach For The Moon and he seems a pretty straightforward horse.

“He was beaten fair and square by Native Trail in the National Stakes, but a lot can change between two and three. Over six months have passed since then and Aidan’s record in the Guineas is second to none.

“I won the 1000 on a second string, Mother Earth, last year so I’m pretty hopeful of another big spin this time. Native Trail sets a very high standard for us to beat, but I’m going to go in there thinking I can lower his colours. You’ve got to be positive.

“As for the draw, we’re in 11, but I don’t think it will matter too much this year with only 15 runners. Point Lonsdale seems very straightforward so I’d imagine he can adapt to whatever happens.”

Perfect Power tries a mile for the first time, having been successful on his season return in the Greenham over seven furlongs at Newbury two weeks ago.

Christophe Soumillon maintains the partnership with son of Ardad, who won four of his six outings as a juvenile, including Group One strikes in the Prix Morny at Deauville and the Middle Park Stakes at Newmarket.

Trainer Richard Fahey feels he took his seasonal bow and the step up in trip in his stride, despite not being fully fit.

“I sort of didn’t have him fully wound up (in the Greenham) and I thought we’d learn a little bit about him,” Fahey said.

“The last thing I wanted was him fully warmed up because if it looked like we weren’t going for the Guineas, we would have a two-month dry spell before he’d run again.

“I used it as a prep, I thought he looked a little but chubby around the edges walking around the parade ring but in my mind I’d left some improvement in him.

“He needed the run and he took a big blow afterwards but there was no hiding place in the race, it’s put him spot on and I haven’t had to do much with him since.

“It was a relief, but it’s not that you’re worried about the ability of the horse, it’s just when you have such a good two-year-old you’re then always asked ‘has he trained on?’. That was the relief.

“This horse has got a lot of natural speed, I could run him in a Commonwealth Cup if I wanted, I’ve put him in the St James’s Palace and the Commonwealth Cup – how many horses can you do that with?

“I always think it’s good to have won at Newmarket, coming down the dip we have seen so many good horses not cope with it. It can only be a major plus.”

Galileo Gold took the 2016 renewal for Hugo Palmer and he runs Dubawi Legend, another making his reappearance. He was two lengths behind Native Trail in the Dewhurst and is partnered by Tom Marquand for the first time.

Dubawi Legend (14) was last seen finishing 10th of 13 to Modern Games in the Breeders’ Cup Juvenile Turf at Del Mar in November.

Palmer said: “We have no regrets about going to the Breeders’ Cup. We had a stop-start year with him and he needed to grow up and I very much felt that going out there would be like giving him three more races.

“It was a complete disaster, but it did teach him and he does seem to be more grown up.

“I’m pretty sure I’m right in saying that no Breeders’ Cup juvenile winner has come back and won a European Classic, but there are over a dozen beaten horses from the Breeders’ Cup that have.

“I just felt there was less chance of things going wrong if we didn’t run in a trial. If we had, we’d have had to take on Perfect Power and whether we’d beaten him or not, we’d have had a very hard race two weeks out for the Guineas, which is what scared me.

“I think our horse would win Galileo Gold’s Guineas. If they were the same year, I feel Galileo Gold would finish second to him, but it’s a different year and a different time.”

He added: “He was second in the Dewhurst last year, the Dewhurst is normally Europe’s leading two-year-old race and the winner is usually the champion two-year-old and the favourite for next year’s Guineas, which is exactly that the winner of the race this time was, Native Trail.

“We were just about two lengths behind him so we’ve got two lengths to find. He’s grown, he’s filled out, he’s done very well.

“I think I’ve trained everything out of the mare, they’ve all won and this is much the best of them. We’ve not proved he’ll stay a mile, but I’m very confident he will, his sister stayed a mile and three-quarters.

Aside from Native Trail and Luxembourg, there are two other colts who take unbeaten records into the race.

William Knight trains Checkandchallenge, who has twice been successful, with a debut success over seven furlongs at Wolverhampton in November and over a mile on his three-year-old bow in a Listed race at Newcastle earlier this month.

“He is in very good form. He is a big underdog, but at the same time he deserves to be in the line-up and I think he can run a big race,” said Knight.

“There is a little bit of an unknown with him, the unknown being that we don’t really know how good he is.”

The other who has yet to see his colours lowered is Light Infantry, who is making his seasonal reappearance having taken the Horris Hill at Newbury on the second of his two starts last season.

Of Jamie Spencer’s mount, trainer David Simcock said: “I’m really happy with him. It will be interesting to see him on fast ground and we’re really looking forward to running him.

“He has done nothing wrong and I think he will run well. How shall I put it? I think there will be more behind him than in front of him.”

Eydon took the Feilden Stakes at Newmarket on his seasonal bow over nine furlongs, so David Egan’s mount is one who has no stamina doubts.

“We were very impressed with him in the Feilden and he’s come out of the race well,” said his trainer Roger Varian.

“It will be a different test altogether on Saturday, but we couldn’t be more pleased with his condition and hope he will run well.”