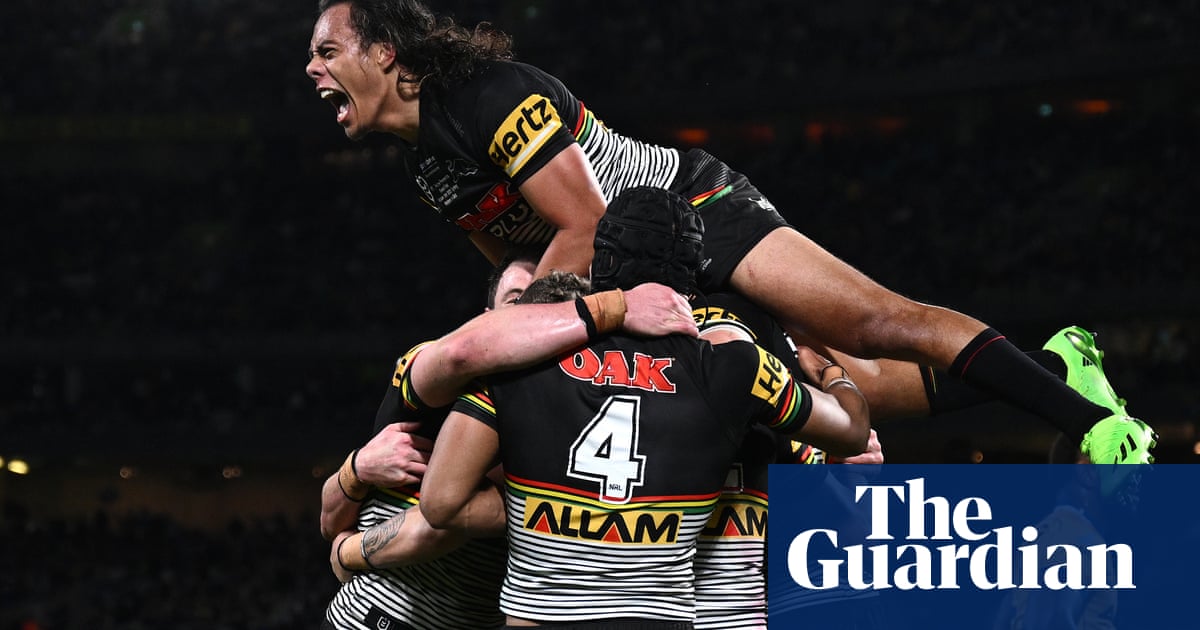 The golden west is now in a golden age. Penrith, just the third NRL team to win win back-to-back unified competitions in three decades, were as close to perfect as they come.

Their grand final win was a demolition job, a 28-12 onslaught few teams in history could have withstood – not even the brave Parramatta.

The merciless showing planted the Panthers firmly among, not only the greatest of the NRL era, but of the limited-tackle era. Their first half was arguably the greatest in a grand final this century. The Eels, for their part, did very little wrong, merely found themselves overwhelmed by the ruthless display of energy, precision and force to ensure the result was not left up to the bounce of a ball.

Led by a truly sublime performance from Clive Churchill Medal winner Dylan Edwards, Penrith did not give an inch. They hit hard and they swarmed in numbers in defence. Nathan Cleary was relentless with his kicking game. Nearly every first-half set started with momentum thanks primarily to Edwards and winger Brian To’o. Lines and angles were run to perfection and at maximum effort.

No single play summed up Penrith’s style more than that of Edwards’s covering tackle on Bailey Simonsson. The Parramatta centre was streaking away with Penrith leading 22-0 when Edwards came from the clouds to cut him down with a scything tackle akin to Scott Sattler’s famous covering defence on Todd Byrne 19 years earlier.

Parramatta did not have a look-in until the game was well and truly gone, scoring both their tries in the final five minutes. While the Eels made some errors, the reality is that there was little they could do in the face of the machine.

While this was very much a premiership of institutional dominance, it was also one of remarkable stories. Few had rated Edwards among the elite full-backs at the start of the season but he finishes the year on the cusp of Australian honours. Reserve Jaeman Salmon was thrust into the headlines earlier in the season when Canberra coach Ricky Stuart called him a “weak-gutted dog”; he is now a premiership winner. Viliame Kikau and Api Koroisau long ago announced their departures in 2023; they leave with back-to-back titles.

It has been an amazing rise for a club who finished 15th in 2012. That was Ivan Cleary’s first year at the helm. Phil Gould had arrived the year prior with a remit to clean out the house and build something special. The focus was on constructing from within, focussing on the huge junior base and building pathways to the NRL team. Gould labelled it a five-year plan. He was wrong on the timeline and would not be at the club when success was truly reached but a decade later this Penrith team is a juggernaut.

Penrith not only won the NRL premiership but also the NSW Cup and State Championship, along with the SG Ball and Jersey Flegg junior competitions

And it is not just the NRL team. The grand final victory capped an exceptional season for the Penrith club who not only claimed the NRL premiership and minor premiership but also the NSW Cup and State Championship, along with the SG Ball and Jersey Flegg junior competitions.

No team has been better positioned to build a long-term dynasty during the NRL era than Penrith. It is not just the success the club has fashioned across the board but also the connection formed. Seven local juniors were part of the Panthers team that won this year’s premiership. They came through the grades taught to play to the same standards and with the same energy expected at the top level. The juniors now coming through are of that standard.

That is the model to which Parramatta must look if they are to end what will now become a 37-year premiership drought. Reflections of 2022 will inevitably evoke a great deal of hurt and pain but, by almost every metric, this year was a success. The Eels exceeded expectations and were simply beaten by a superior side on the biggest day of all. The accomplishments of the Eels’ NRL team, however, should not paper over the need for improvement below with the NSW Cup team finishing fifth and the SG Ball and Jersey Flegg teams failing to make the finals.

It is not just the Eels, either. Penrith’s strong junior system has been there a long time. Now they have simply organised and optimised – a necessity for every club with ambitions to develop cheap local talent and have the capacity to replenish stocks in the event of departures.

With the Panthers’ success through the grades and stability where it counts, this club that has set itself up to repeat the exploits of the mighty St George team of the 1950s and ’60s.