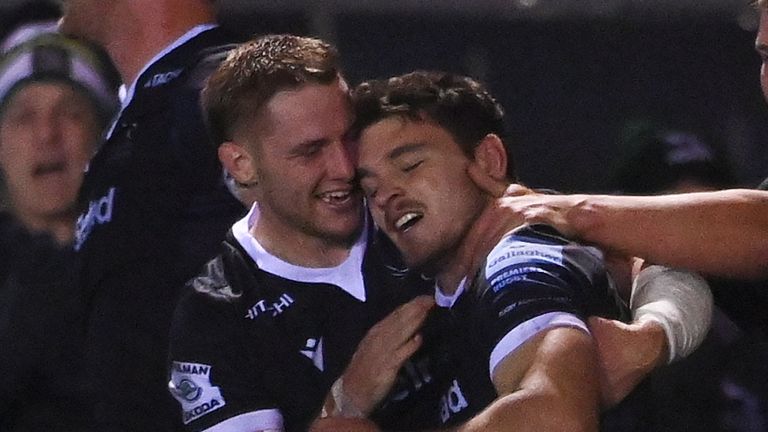 Ed Holmes was sent to the sin-bin after 20 minutes before Newcastle capitalised through Connor Collett to extend their lead, with Mateo Carreras and George McGuigan also among the scoring for the Falcons

Bristol saw their unbeaten start to the Gallagher Premiership season come to an end at Kingston Park as Mateo Carreras scored two tries and George McGuigan recorded his fifth try of the season in a 30-15 win for Newcastle.

Careras – one of three Argentines coming into the Falcons’ starting XV, along with Matias Orlando and debutant Matias Moroni – scored the first and last of the hosts’ four touchdowns, with Connor Collett also on the scoresheet.

Tian Schoeman kicked 10 points for the home side, while Henry Purdy and Richard Lane went over for Bristol and AJ MacGinty booted five points.

Bristol looked like they would open the scoring on 10 minutes, with only a last-ditch tackle from Orlando preventing MacGinty from going in under the posts. However, the Bears won a penalty for offside and MacGinty was able to kick an easy three points.

The Falcons stormed back and were held up inches from the try line before winning their own penalty. They opted for the five-metre scrum and their endeavour was rewarded with Carreras going in at the corner after Schoeman had flung a long pass out to the left.

Ed Holmes was sent to the sin-bin for a cheap shot on 20 minutes, with Newcastle turning the screw. It did not take long for the advantage to work in their favour as Collett waltzed through from five metres out to extend the lead. Schoeman failed to add the extras to either of his side’s opening two tries.

Kyle Sinckler was penalised at a scrum for not driving straight and an easy kick was turned down in favour of a kick to the corner. McGuigan squeezed over from a pick and go following the lineout before Schoeman split the posts.

The Bears started the second half on the front foot and spent the opening five minutes deep inside Newcastle territory.

However, a succession of penalties resulted in Collett spending 10 minutes in the bin. Within the space of a minute, the Falcons lost Sean Robinson – again for infringements close to the line.

The numerical advantage eventually worked in the favour of the Bears, with Purdy going over in the corner. MacGinty sent his conversion attempt wide of the post.

Bristol then grabbed their second try of the half as Lane crashed over with Newcastle still down to 13 men. MacGinty added the conversion to bring the visitors back to within a score, with 21 minutes of the game remaining.

Schoeman calmed home nerves with a penalty before hitting the upright from another long-range penalty five minutes from time. The loose ball was not taken cleanly by Bristol and they ultimately conceded another penalty, but this time in their own 22. Schoeman made no mistake from 15 metres to take away the losing bonus point from Bristol.

Newcastle sealed the try bonus with the clock in the red as Carreras showed his wheels to race in for his second try. Schoeman added the conversion to put some added gloss on the score.