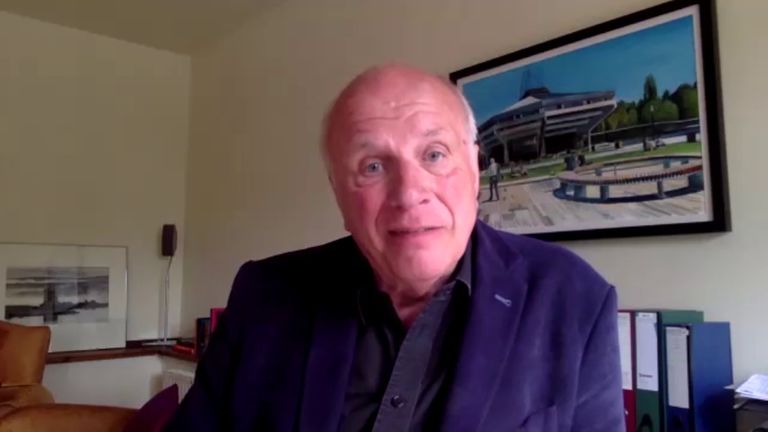 Gary Neville has welcomed proposals put forward by the chair of a fan-led review urging football to be independently regulated.

Former Sports Minister Tracey Crouch has written to Culture Secretary Oliver Dowden to say that a regulator “to protect the future of key aspects of our game” is needed.

And Neville has been quick to praise the move, taking to social media to share the letter with an applause emoji.

Please see the below opening two paragraphs with a very scruffy red line ( apologies ) stating that a new independent regulator is needed for English Football ? pic.twitter.com/ANlRyl1ctZ

The review was promised as part of the Conservatives’ 2019 General Election manifesto and commissioned early after the foundation and swift collapse of the Super League in April.

Crouch, the Conservative MP for Chatham and Aylesford, said the review had heard over 100 hours of evidence from fans, leagues, the Football Association and clubs at every level of the pyramid.

It has received 70 pieces of written evidence and also accepted feedback from fans via a survey which closes on Thursday.

Crouch wrote: “The evidence has been clear that football clubs are not ordinary businesses. They play a critical social, civic and cultural role in their local communities. They need to be protected – sometimes from their owners who are, after all, simply the current custodians of a community asset.”

Crouch continued: “Key aspects of our national game are at genuine risk. The short-lived threat of the European Super League jeopardised the future of the English football pyramid.

“While that threat has receded – for now – the dangers facing many clubs across the country are very real with their futures precarious and dependent in most cases on the willingness and continuing ability of owners to fund significant losses.”

Crouch highlighted Deloitte figures from 2018-19 – before the impact of the coronavirus pandemic – which she felt underlined the perilous state of many clubs’ finances.

Crouch wrote: “It is sobering to consider that these numbers are the end result of a long period in which football had been growing revenues to record or near record levels.

“The threat of possible future reductions in income expected as the broadcast market diversifies indicates that, without reform, English football could face an existential crisis in years to come unless pre-emptive action is taken now.”

Crouch said those financial issues were an indication that the current regulatory framework was not working and was in need of reform.

Football authorities have “lost the trust and confidence” of fans, she said, as had a number of clubs.

She said the authorities had been issued with repeated warnings in the past which had not been heeded, and “therefore it is now time for external assistance”.

Crouch also said the game’s governing bodies had not succeeded in delivering sufficiently on the equality, diversity and inclusion agenda.

Football supporters remain the game’s greatest strength, Crouch said, and said she would work over the summer to ensure greater fan engagement and influence at all levels of governance in the game.

Crouch then set out the areas she felt an Independent Regulator for English Football (IREF) should be introduced to look at financial regulation, corporate governance and ownership.

She said that was “likely” to include cost controls, real-time financial monitoring, minimum governance requirements and for owners and directors to be tested separately, both when first taking over or joining the board of a club then on an ongoing basis.

Crouch does not believe a regulator should oversee what she described as “football” issues – the running of leagues, video technology and so on, which she said should remain with the existing bodies.

She said a substantially reformed FA could in the future absorb the functions of an independent regulator, though she said evidence the review had received indicated this possibility was “some way off”.

Crouch also said the regulator could operate through a licensing system which could help to protect existing competitions against any Super League-style breakaway threats in the future.

She intends to take steps to protect clubs as heritage assets, by giving a ‘golden share’ to fans over certain reserved items such as club badges, location, colours and even competition – for instance if a club owner sought to join a breakaway league.

Crouch said there was a “strong case” for reform at the FA, the EFL and the Premier League and was inclined to recommend at least 50 per cent of the FA board be composed of independent non-executive directors.

She also called for the removal of club representatives from the EFL and National League boards, saying their replacement with independent directors would be “a welcome reform”.

Crouch also said “meaningful discussions” should take place to consider the top tier of the National League being absorbed by the EFL, something which National League fans surveyed by the Football Supporters’ Association called for.

“I am aware that there are existing working practice agreements in place between the English football authorities and politely suggest that my recommendations should be considered as superseding these existing agreements,” Crouch wrote.

In response, Dowden welcomed Crouch’s recommendations and said: “We’ve seen this year with the failed European Super League proposals and Euro 2020 how central football is to our national life.

“I’ve been clear that now is the time to take a wide-ranging look at reform of the game. I will not hesitate to take bold steps where necessary.

“I am grateful to the chair and panel for their update on the fan-led review. I look forward to receiving the final report and recommendations in the autumn.”