Never leading by example: why do England struggle after scoring first? | Jonathan Liew 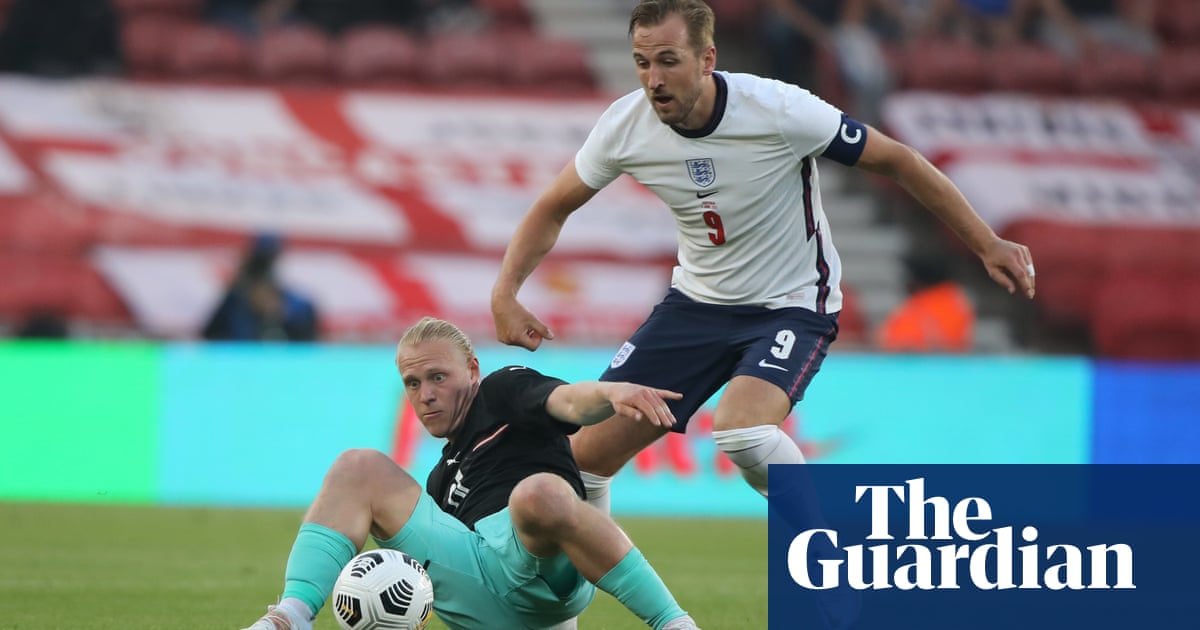 Trent Alexander-Arnold clears his lines. And as Austria gingerly gather possession and work the ball backwards, you can see Harry Kane rushing up to start the press, waving the rest of the England team forward to join the charge, which they do. After a series of tentative passes in their own half, Austria’s goalkeeper, Daniel Bachmann, is hastily forced to clear to touch, pursued by a swarm of white shirts. An hour has been played at the Riverside Stadium, and England have just gone 1-0 up.

In the alternative history of Wednesday night’s game, this is the point at which England, energised by Bukayo Saka’s fine goal and the exhortations of their captain, seize the moment and with it control of the game. With Austria forced to commit numbers forward in search of an equaliser, England feast on the open spaces, tear into the middling Austrians and run out comfortable winners in front of a rocking Teesside crowd.

In the actual history, this is the point at which Gareth Southgate decides to make a quadruple substitution that has clearly been planned in advance. Off to a warm round of applause come Declan Rice and Tyrone Mings, as well as Kane and Jesse Lingard, two of the front four who managed to press Austria so effectively in their own half.

And so for the last half-hour a disorganised new-look England get increasingly sketchy. Ben Godfrey almost passes the ball into his own net. Dominic Calvert-Lewin almost gets himself sent off. Jordan Pickford tips the ball over the bar. Ben White clears off the line. Michael Gregoritsch puts two extremely scoreable headers wide. In the end, it’s hard to disagree with the Austria defender Aleksandar Dragović when he claims that they “deserved a draw”.

Southgate seemed largely unconcerned afterwards, putting England’s “disjointed” last half-hour down to conditioning and the volume of substitutions. But Austria also made six changes in the last half-hour and ended up looking by far the fresher and more fluent team. And perhaps you can read too much into a slightly artificial scenario in a pre-tournament friendly. Then again, this is actually part of a much longer-term trend: something strange seems to happen to England when they take the lead.

Austria weren’t quite good enough to capitalise. But you don’t have to search very hard to find examples of games where England have gone ahead, taken off the handbrake, and been severely punished. It’s happened nine times in the Southgate era alone: twice at the hands of Spain (at Wembley in 2016 and 2018), against Scotland at Hampden Park, against France and Italy in friendlies, against Colombia and Croatia at the last World Cup, against the Netherlands at the 2019 Nations League and the Czech Republic in a qualifying game.

In fact, England have taken the lead in each of their past five tournament knockout games and won only once (against Sweden in 2018). And in case you suspected this was purely a recent phenomenon, then think back to Russia at Euro 2016, USA at the 2010 World Cup, France and Portugal at Euro 2004, Brazil in 2002. Since the start of the century, England have won only 13 out of 26 games when scoring first at a tournament. It’s by far the worst record of any major nation. This isn’t a statistical fluke. It’s a serial pattern of behaviour.

Why might this be the case? You can of course make allowances and excuses for each individual scenario. But taken as a whole, certain themes seem to emerge. Sometimes, as against Iceland in 2016 and France in 2012, the sucker punch comes almost instantly. More often, England make a dream start – and you suspect only in this country is “scoring too early” a recognised footballing trope – before sitting in and preserving what they have. Croatia in 2018 would fall into this category.

And so comes the long, slow strangle as England desperately try to hang on. As the game progresses, the immensity of what they are about to achieve weighs ever heavier. Chances go begging. Doubt seeps in. Negative substitutions are made (Lingard for Jadon Sancho against the Netherlands in 2019; Eric Dier for Dele Alli against Colombia in 2018). Defenders entrench a little deeper. Pressure is invited, and once the inevitable equaliser arrives – “it’s been coming”, someone will invariably point out – England are too set in their passive ways to regain control.

Of course, identifying the issue is one thing. Fixing it is another, and the stark contrast between England and other big sides suggests the problem is to some extent endemic: a combination of inflated expectations, historical frailties, the lack of a confident technical vocabulary. But in large part this is also a question of game management: hitting teams while they’re down, sensing the pivotal, momentum-shifting periods in a match and seizing them.

And ultimately, for all the importance of substitutions, this process has to be led by the players on the pitch. You sensed this was what Kane was trying to do on Wednesday before he was taken off: leading from the front, scenting blood, urging his team forward to kill the game. How England handle these moments over the coming weeks could well spell the difference between success and failure. Because as the last two decades have shown, teams who can’t hold on to a lead tend not to get very far.