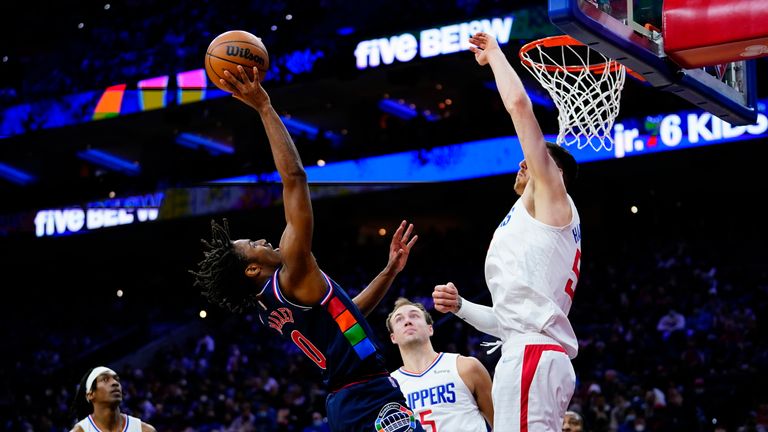 Stephen Curry drained a game-winning buzzer-beater to help the Golden State Warriors beat the Houston Rockets, James Harden logged a triple-double as the Brooklyn Nets beat the San Antonio Spurs and the Los Angeles Clippers overcame a 24-point deficit to down Joel Embiid and the Philadelphia 76ers.

Stephen Curry beat the final horn with a step-back 20-footer as the Warriors rallied past the Rockets 105-103 in San Francisco.

Down by nine with 4:49 to play, the Warriors pulled themselves back to a 103-all tie on a pair of Otto Porter Jr free throws with 1:22 remaining, then got one final possession when Houston’s Garrison Mathews missed a three-point attempt with 8.5 seconds left.

Curry finished with a game-high 22 points for the Warriors, who had lost six of their previous nine games. Golden State’s Jordan Poole scored 20 points, and Andrew Wiggins had 17.

Christian Wood had 19 points and 15 rebounds to pace the Rockets, who settled for completing a 3-2 road trip.

James Harden scored 37 points, dished out 11 assists and grabbed 10 rebounds and Brooklyn turned it on in the fourth quarter to win at San Antonio.

The Nets led by five points at the end of the third quarter after a late run and continued that momentum into the fourth, steadily pulling away over the final eight minutes.

LaMarcus Aldridge added 16 points off the bench for the Nets in his first return to San Antonio since he was released by the Spurs last season.

Dejounte Murray led the Spurs with 25 points, 12 rebounds and 10 assists to record his second consecutive triple-double and his ninth this season.

Jaren Jackson Jr had 20 points and four blocks and Ziaire Williams scored 17 for the Grizzlies, who played without Dillon Brooks (ankle) and Desmond Bane (health and safety protocol).

Nuggets star Nikola Jokic had 26 points, 12 assists and 11 rebounds for his fourth straight triple-double and 11th of the season. Will Barton scored 27 points and added eight assists.

Antetokounmpo paced the Bucks with 30 points on 11-of-23 shooting and added 12 rebounds, while Middleton finished with 16 points, 10 rebounds and six assists, and Portis had 12 points and 13 rebounds.

Milwaukee led by seven with just 2:32 left to go, but the Bulls pulled within two with just over a minute remaining. DeMar DeRozan (35 points) missed what would have been a go-ahead three-pointer with 23 seconds left, and Middleton sunk a pair of free throws to secure the win. Ivica Zubac contributed 12 points and 10 rebounds, for the Clippers. With Los Angeles leading by one, Marcus Morris Sr missed two free throws with 9.4 seconds left, giving the Sixers one last chance. Tyrese Maxey missed a runner at the buzzer.

Joel Embiid had 40 points, 13 rebounds and six assists to lead the 76ers. 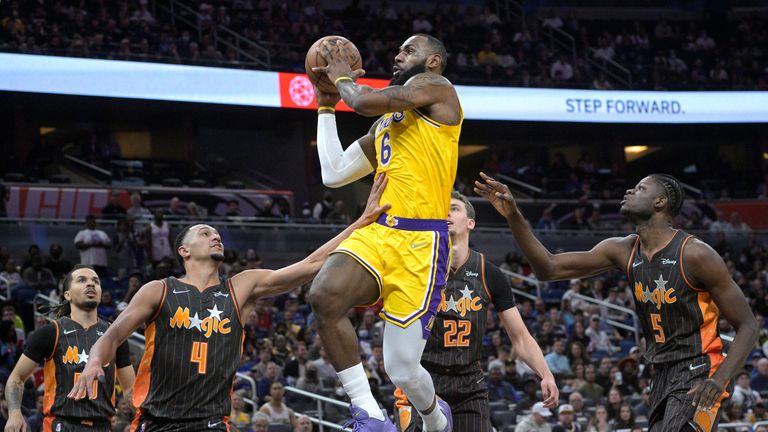 Carmelo Anthony came off the bench to score 19 of his 23 points in the second half, helping the Lakers bring their overall record back to the .500 mark (23-23). Anthony made four of five three-point attempts as Los Angeles finished 13-for-30 from beyond the arc.

James moved ahead of Paul Pierce into 15th place on the NBA’s total games played list (1,344). Wendell Carter Jr was one of six Magic players in double figures with 19 points after he missed seven games with a hamstring injury.

Gobert, questionable earlier in the day because of ankle soreness, made eight of 11 field-goal attempts and blocked four shots. Utah, who again played without Donovan Mitchell (concussion protocol), got 20 and 19 points, respectively, from Jordan Clarkson and Mike Conley.

The Hawks a nearly blew an 18-point, second-half lead when the Heat made six three-pointers in the final quarter and pulled within a point in the final minute. However, Jimmy Butler missed two shots in the last 22.8 seconds. Miles Bridges had 22 points and 14 rebounds and PJ Washington pumped in 20 points. Washington had managed only a combined 22 points in his previous six games, but he drained six three-pointers on 10 long-range. Rozier finished with nine assists.

Shai Gilgeous-Alexander poured in 29 points and Josh Giddey racked up 21 points and nine rebounds for the Thunder, whose losing streak reached four games.

Jusuf Nurkic had 29 points and 17 rebounds as Portland held hosts Boston without a field goal for the final 7:19 of the game.

Robert Covington hit a three-pointer to give Portland a 103-102 lead with 32 seconds left before Jayson Tatum made two foul shots six seconds later to put Boston ahead.

Nurkic’s hook shot gave the Blazers the lead with 13 seconds left, and he sealed the victory with two free throws with 0.8 seconds left.

The Raptors’ Fred VanVleet hit the go-ahead three-pointer with 59.5 seconds to play in the fourth quarter and finished with 21 points and 12 assists.