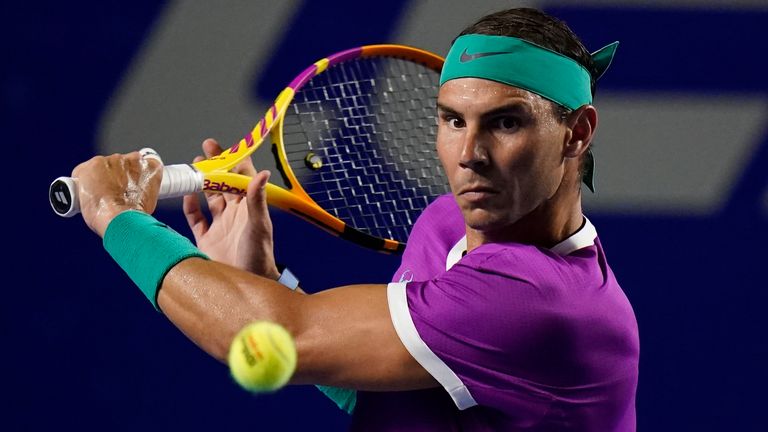 The 21-time Grand Slam champion extended his winning run in 2022 to 12 matches through his victory over Stefan Kozlov; he will now face Tommy Paul in the quarter-finals

Rafael Nadal eased into the quarter-finals of the ATP 500 tournament in Acapulco and extended his winning run to 12 matches in 2022.

The 21-time Grand Slam champion and three-time winner in Acapulco continues to wrack up victories following titles at the Melbourne Summer Set and his Australian Open victory at Melbourne Park.

In Mexico, Kozlov was called in as a last-minute replacement for the injured Maxime Cressy in the main draw and Nadal made light work of his opponent, who he had practised with on Monday.

Barring a brief period in the second set when Kozlov converted his only break-point chance in the contest, he was no match for Nadal.

Nadal’s previous best start to a season was 11-0 in 2014 and that ended with a defeat to Swiss Stan Wawrinka in the Australian Open final.

Next up for the 35-year-old Spaniard will be another American – 39th-ranked Tommy Paul – with a potential semi-final clash against Daniil Medvedev, the man he defeated in the Australian Open final from two sets down.

“It’s always important to win as quickly as possible, but the most important thing is to win,” Nadal said after his 76-minute victory over Kozlov. “Tonight has been straight sets, that’s great news, and I’ll try to be ready for tomorrow again against a tough opponent.”

Medvedev cruised through against Pablo Andujar 6-1 6-2 and put himself three wins away from victory at the tournament and rising to the world No 1 ranking for the first time.

He dummied an underarm serve on match point but instead thumped his seventh ace to secure the result. Medvedev will now face Japanese qualifier Yoshihito Nishioka.

Stefanos Tsitsipas also wasted little time in dismissing American qualifier J.J. Wolf, sprinting to a 6-1 6-0 win in just 47 minutes in the last match of the evening on the main court.