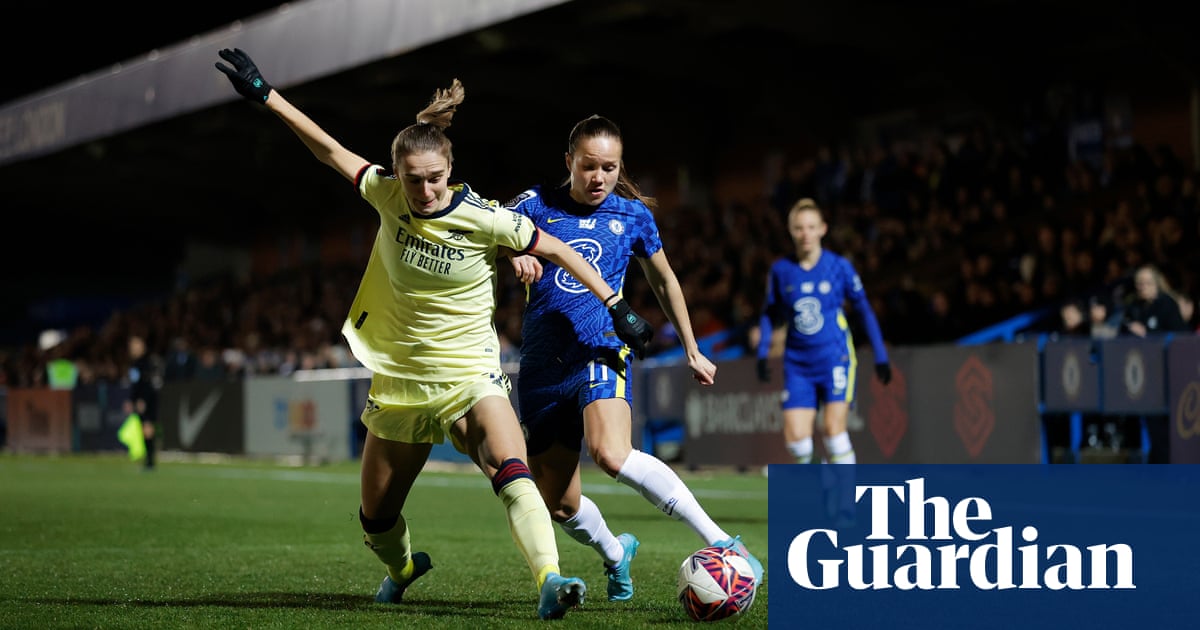 In fairness, they did warn us. Perhaps, on reflection, we should have listened to Jonas Eidevall and Emma Hayes when they urged us not to treat this game as a title decider. It was many things: taut, tense, turbulent, controversial, stressful in the extreme, particularly in the closing minutes when it felt as if the entire game could pivot on a single lucky bounce.

For all this, it was probably Arsenal who departed the happier of the two sides. Arguably it was they who had more to prove here. Results had been poor. Performances had been even worse. And on a broader level they were fighting an entropy and self-doubt that seems to have set in ever since their three heavy defeats in the Champions League. It is, in effect, the same entropy the men’s team have been fighting for 15 years: a sensation that the elite are pulling clear, that the future lies elsewhere, that their best player is about to move to Barcelona for nothing.

It was in this context that Eidevall made the decision that may well define the rest of Arsenal’s season. Vivianne Miedema, the all-time top scorer in WSL history, started in midfield, with new signing Stina Blackstenius leading the line. It was not even, as many on social media suggested, a pure No 10 role. Although Miedema often played just behind Blackstenius, at other times she was the deepest Arsenal midfielder on the pitch, given the licence to go pretty much where she wanted to get the ball and build attacks.

There are two ways of looking at this, really. On a tactical level, it made plenty of sense. For all her goalscoring achievements in the English game, Miedema has always been at least as good at creating and linking moves as finishing them. It follows, then, that if you want your most technically gifted player to see more of the ball, it makes sense to move her nearer the centre of the pitch. Miedema has often liked to drop into midfield anyway. Why not formalise the arrangement? And for about 40 minutes, Miedema pulled the strings delightfully. She popped up on the right to clip a cute little cross to the near post. She won the ball high up the pitch. She played a lovely through-ball to Beth Mead, delaying the pass for just long enough to wrong-foot the Chelsea defence. She hit the post herself from a knock-down. She was noticeably, and by some distance, the best Arsenal player on the pitch.

But as Chelsea began to come into the game towards the end of the first half and at the start of the second, we also glimpsed the plan’s limitations. Whether as a lone forward or false No 9, Miedema has never really been the sort of player who grabs a match by the lapels and dominates it. A big part of her game is opportunism and disappearance. She stays off the radar just long enough for defenders to drop their guard for a split second. And when you are as sharp as Miedema, a split second is often all you need.

The problem comes when your job is not simply to run up the score but to define the team around you. As Arsenal began to retreat in the second half, as Sophie Ingle started to mark her more tightly, you could occasionally see Miedema’s team-mates looking to her for inspiration, for an outlet. Miedema herself was still finding little pockets of space, making clever runs, barely putting a foot wrong. But at a time when Arsenal were craving presence in the middle of the pitch, it felt like a misalignment.

On balance, there was enough here for Arsenal fans to feel quietly encouraged. Blackstenius had a quiet night here, but will thrive against weaker opposition; the partnership with Miedema deserves time to gel and flourish. The great unknown, of course, is whether Arsenal are building a vision of the future or an expedient for the present; whether they are grooming Miedema’s partner-in-crime, or her eventual replacement.