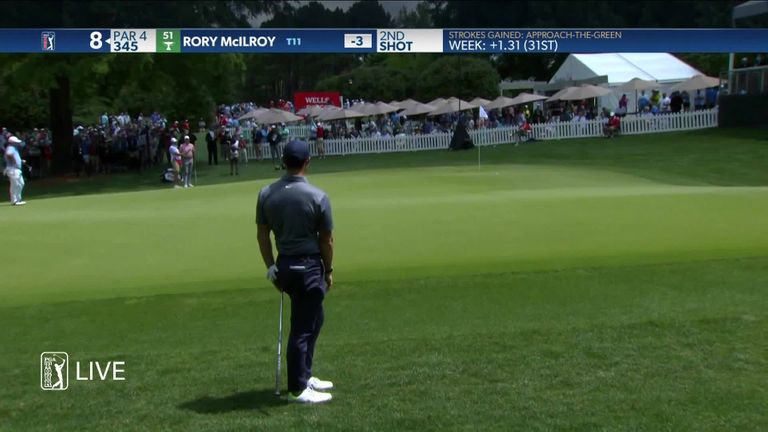 Rory McIlroy cards a five-under 66 to get within two shots of the halfway lead at Quail Hollow, a venue where he won in 2010 and 2015; Matt Wallace sets pace alongside Gary Woodland and Patrick Rodgers on six under.

Matt Wallace holds a share of the lead at the halfway stage of the Wells Fargo Championship, as Rory McIlroy made a significant jump up the Quail Hollow leaderboard.

Wallace mixed five birdies with a lone bogey to card a four-under 67 on Friday and head into the weekend on six under alongside Patrick Rodgers and 2019 US Open champion Gary Woodland.

Kramer Hickok is a shot off the pace in fourth despite bogeying two of his last five holes in a second-round 69, while McIlroy surged into contention after bouncing back from an opening-round 72 to card a five-under 66 and move inside the top-five.

The Northern Irishman is a two-time winner at Quail Hollow and has posted top-10 finishes in seven of his nine previous appearances at the venue, while McIlroy’s impressive second-round display sees him progress through to the weekend at a PGA Tour event for the first time in two months.

McIlroy – beginning on the back nine – failed to take advantage of the par-five tenth but produced a remarkable pitch from the rough to set up a tap-in birdie at the 14th, before holing from eight feet at the 15th and picking up another shot from a similar distance at the 17th to reach the turn in 33.

The 32-year-old rolled in a 20-footer at the first and made a fifth birdie of the round at the par-five third, with McIlroy then cancelling out a missed six-footer to save par at the fourth by converting a birdie opportunity on his penultimate hole to get back to four under.

McIlroy is joined tied-fifth by Keith Mitchell, Carlos Ortiz, Scott Piercy and Scott Stallings, who briefly held the solo lead in tough conditions after four birdies in the opening six holes of his two-under 69.

Overnight leader Mickelson failed to replicate his impressive first-round display as he registered just one birdie in his four-over 75, with the 50-year-old double-bogeying the par-three 17th after finding water off the tee to slip three off the pace.

Tommy Fleetwood struggled to a second-round 75 to stutter into the weekend on level par alongside world No 2 Justin Thomas, the highest-ranked player in the field, while Jon Rahm bogeyed his final two holes to miss the cut for the first time since June.

Watch the Wells Fargo Championship throughout the weekend live on Sky Sports. Live coverage continues on Saturday with Featured Groups from 1pm via the red button, ahead of full coverage from 6pm on Sky Sports Golf.