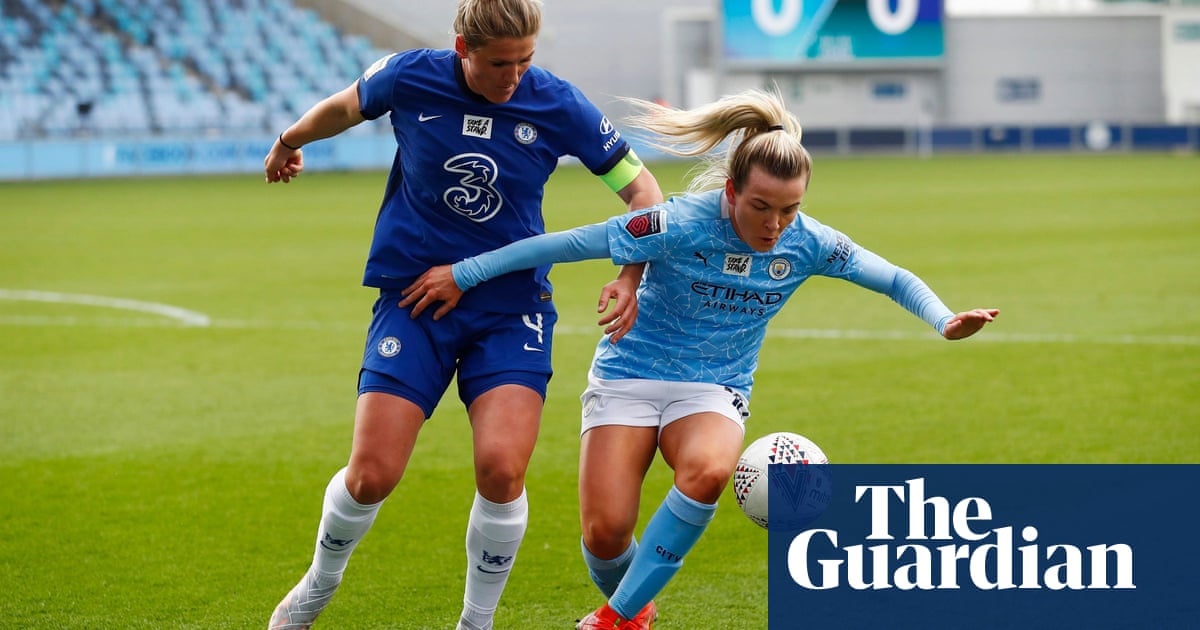 Before kick-off Emma Hayes told her players she did not want to end up watching a thriller yet, for once, even a team as accustomed to being in control as Chelsea could not quite grant their manager’s wish.

They may have ended the evening with that all important two-point lead over Manchester City intact and another Women’s Super League title within touching distance but, along the way, the defending champions received a considerable fright.

As City’s England winger Lauren Hemp illuminated a night that proved beyond doubt that the women’s game has wings and the home manager, Gareth Taylor, emphasised his tactical intelligence, neutrals were surely bewitched.

For part of the second half, though, Hemp and company left Chelsea looking as bewildered as a householder confronted by a flooding washing machine and unable to locate the stopcock.

Yet if it took a brilliant save from Ann-Katrin Berger to prevent Hemp scoring a late winner that would have turned the title race on its head, Hayes had Sam Kerr in her armoury and the Australian’s opening goal ensured Taylor would need to keep taking tactical gambles.

Although City started strongly and the high-octane intensity was almost overwhelming at times, Kerr retained her poise and unerring positional sense. Both defences endured some uncomfortable moments in the absence of their respective captains and defensive stalwarts, Steph Houghton and Magdalena Eriksson, and the former possibly winced as Kerr headed that opener.

Similarly Eriksson cannot have relished the sight of Millie Bright’s powerlessness in the face of Hemp’s excellent low cross before Chloe Kelly equalised.

Although Pernille Harder’s penalty restored the visitors’ lead, City finished the first half as they had begun it and Berger did very well indeed to tip Lucy Bronze’s goalbound volley to safety.

Taylor’s players were in such ruthless early second-half mood that Chelsea scarcely touched the ball. Unusually Fran Kirby, most people’s WSL player of the season, was unable to join the attacking dots for Hayes’s side with her customary accomplished ease.

The problem was that, with City on an urgent goal quest and the excellent referee, Rebecca Welch, letting the action flow, Chelsea struggled to slow the tempo. The fragility of their lead was highlighted by the struggle to subdue Hemp, with double‑marking the winger creating gaps elsewhere.

As his side failed to exploit them Taylor made a potentially season‑defining call and replaced City’s leading scorer, Ellen White, with Rose Lavelle. Given Lavelle was a key component of the 2019 USA World Cup-winning side it speaks volumes for the WSL’s strength that she began on the bench but her form has been patchy lately and eyebrows were raised.

Yet once Lavelle assumed an uncharacteristically deep‑lying role and she and her USA teammate Sam Mewis began dominating midfield it looked an inspired switch. With Chelsea unable to stem the tide any longer Hemp deservedly equalised before seeing Berger perform wonders to subsequently tip her goalbound header to safety and almost certainly ensure the WSL trophy would be returning to London.

As the music died Taylor had cause to reflect wryly on the lyrics of a certain Abba hit that has served as the adopted soundtrack to almost half a century of title deciders: “I’ve played all my cards. And that’s what you’ve done too. Nothing more to say. No more ace to play. The winner takes it all. The loser’s standing small.”

No matter; he and City should be proud their contribution to this outstanding title race can only see the WSL grow in stature.